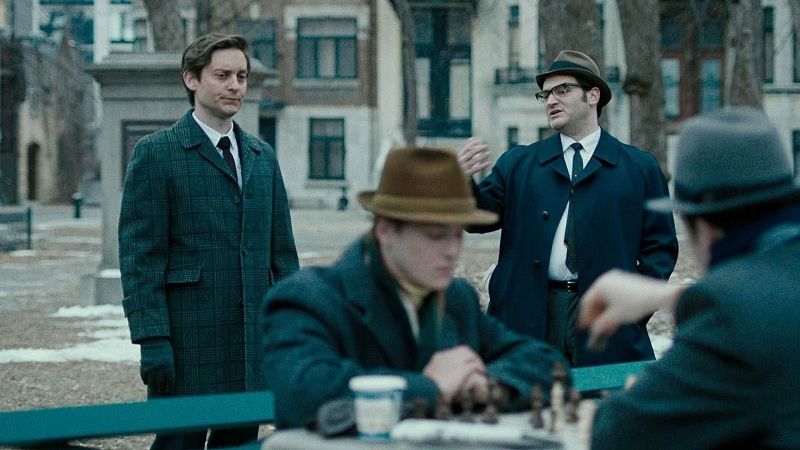 Does Montreal play itself? Montreal plays a large variety of roles, including Reykjavik, Brooklyn and Los Angeles (splitting the duties with the real L.A.) but not once does it play itself.

Most egregious local landmarks: It’s happened more than once that films have used Montreal parks to stand in for comparatively much larger parks somewhere else. While this isn’t quite as extreme as it was in Wicker Park, Carré St-Louis does stand in for Washington Square Park (as seen in the photo above). The stretch of Notre-Dame containing both Joe Beef and Liverpool House is turned into Bobby Fischer’s home block in Brooklyn, and the (significantly altered) interior of Liverpool House plays the chess club where Fischer develops his skills. Other notables include the Mirabel airport, the creepy tunnel at the foot of St-Marc and the hallways of McGill.

Notable local talent: The sheer amount of scenes where reporters welcome Fischer at one airport or another probably means the film employed about half the ACTRA members in the city; look closely, and I’m sure you’ll also peep someone you know scribbling madly into a pad. There are more sizable roles for Conrad Pla (as young Fischer’s chess mentor), Cult MTL readers’ fave Évelyne Brochu (as the prostitute who takes Fischer’s late-in-life virginity) and Sophie Nélisse as the younger version of Fischer’s sister.

People tend to find chess in about the same part of their lives that they find bands like Rush and conceivably begin to enjoy things for their complexity, rather than in spite of it; it unlocks a part of the brain that evidently remains locked for me, because I fuckin’ hate chess (and Rush, actually). On cinema screens, though, chess makes itself rather inconspicuous; after golf, it’s probably the least filmed pastime in history. Even in the great movies where chess is prominently featured like The Seventh Seal or Fresh, little more than a passing understanding of the rules of chess is necessary. Before watching Edward Zwick’s Pawn Sacrifice, I would probably have dismissed chess as inherently uncinematic; you could certainly make it work, but it would be difficult to extract drama from two people looking at a board and moving things around.

I’m happy to report that I was mostly wrong; there is something inherently cinematic about chess, and it’s everything that happens outside of the chess board. Zwick very rarely turns his camera to the actual chess pieces. He gives only passing importance to the actual moves being made and focuses on the faces, the grinding of cogs within, the tics — basically everything but chess.

It helps, of course, that Pawn Sacrifice tells the story of Bobby Fischer, the child prodigy turned beloved chess master (and probably the only non-Russian household name in the chess world). Born in Brooklyn in the 1940s and raised by a single mother, Fischer (played as an adult by Tobey Maguire) develops an incredible affinity for chess early on. By his teens, he’s jetting all over the world and defeating people three times his age. Even at this early stage, Fischer begins suffering from paranoid delusions, feeling like he’s watched at all times and railing against the conspiracies that rule the chess world. He’s approached by a lawyer (Michael Stuhlbarg) who sets up a match against the reigning champion, Boris Spassky (Liev Schreiber). With a former champion and current Catholic priest (Peter Sarsgaard) in tow, Fischer becomes an American emblem of the Cold War. 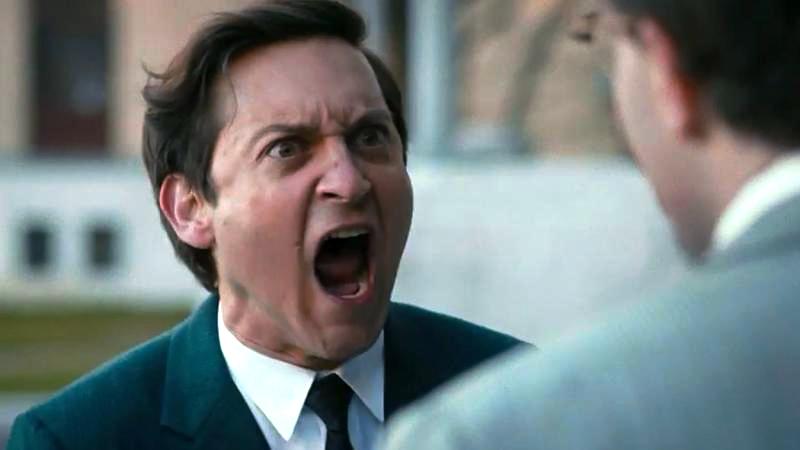 Fischer is automatically a more compelling figure than most chess players, not only for his prodigious talent but also for his relatively unstable mental health. You could argue a movie could be made just from his years in exile, which began right after the events of this film, without ever really mentioning chess. Zwick really hits a goldmine when he’s given the chance to simply let Fischer be; not when he yells at people or tears his room apart looking for a wiretap, but when he simply has to go and be what he is: a genius chess player, with all of the repetitive prep work that that requires.

Though I don’t know enough about Fischer to ascertain whether this is an entirely accurate portrayal, Zwick has a very “just the facts, ma’am” approach to storytelling that’s sometimes more beholden to an accurate timeline than it is to character depth. Supporting characters zip in and out of Fischer’s life without much avail; despite eschewing a traditional biopic structure, screenwriter Steven Knight’s script relies on some pretty rote crutches here and there.

As compelling as the material that forms Pawn Sacrifice may be, it’s also the kind of movie that’s not above using Jefferson Airplane’s “White Rabbit” in its “the ’60s are here!” montage. (The film also really, really overdoes it on the news bulletins. Each of Fischer’s games — and there are probably at least 10 — is introduced with a montage of newscasters from around the world. Every time.)

At its best, Pawn Sacrifice is comparable to in-depth historical portrayals like Good Night and Good Luck or Frost/Nixon in its exploration of the minutiae of history. It’s richer and more nuanced than you’d expect, but it also suffers tremendously from the existence of countless other biopics and the clichés they’ve birthed. Bobby Fischer may well have been the closest thing to a rock star the chess world has ever had, but that doesn’t automatically make him a rock star. ■