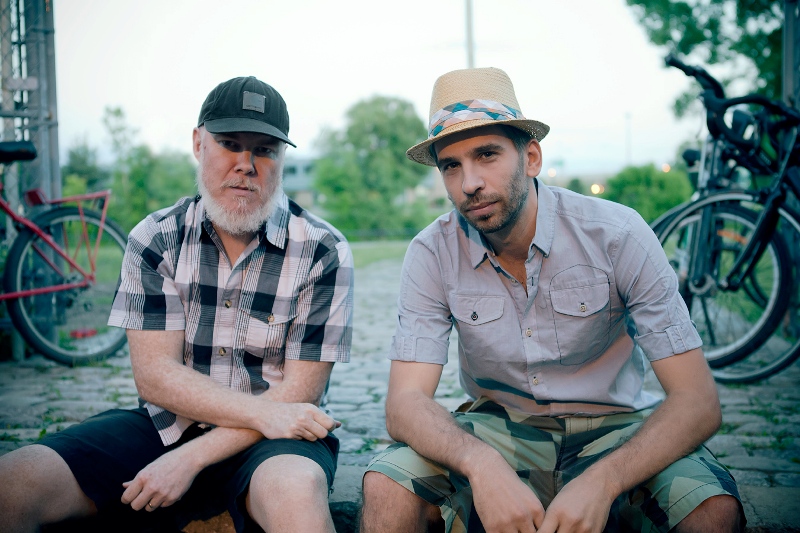 An upsetter is usually a desirable thing in reggae, someone to come along and shake things up so no one gets too comfortable on the throne. But in the case of the lamented St-Henri summer monthly Sud-West, put to pasture in 2015 due to condo developments along the Lachine Canal and the peace and quiet they absolutely demand, the upsetter was a fucking idiot and we in the Southwest were left decidedly un-vibing last year.

Well, event co-selectors Ghostbeard and Poirier are back at it for 2016, aiming to put Jah love on the map in the city’s Nord-East. We spoke by email about the pair’s monthly reggae renaissance.

Darcy MacDonald: Congrats on the reboot. First off, please explain what happened at the St-Ambroise Terrasse and why the event was on hiatus last summer?

Ghostbeard: A few years ago when they broke ground on the condos next to the terrasse, we sort of knew it would be over. Relentless complaints from neighbours just ended up causing a huge issue, although by all accounts it was mostly just one person. Despite compromises on turning volume down and ending earlier, the cops just kept showing up and not only did it cause St. Ambroise people a huge headache, it just ruined the vibe in general. It’s a shame as that terrasse is a really great location with really great people involved, and we ended up making a really exciting mid-week party that a lot of people looked forward to.

DM: Was there an alternative Southwest space you considered in starting over?

G: We looked at a few different options but nothing really had the same feel or it came with the same noise limitation problems. Gentrification is a bitch. But hey, instead of smashing up an artisanal grocery store and lamely calling it a revolution, we looked for an other undeveloped area we could make some noise in.

DM: I must confess I have never been to TOHU and can’t get my head around what it is from their site. Please, fill us in.

Poirier: The TOHU is great place located in the St-Michel neighbourhood at the corner of Jarry and D’Iberville. They’re mostly associated with circus events. The space they have, especially outside, is a perfect set-up for Nord-East because it has a big terrasse with tents to protect from heavy sun or rain, huge trees, picnic tables, booze and food. It’s not a secret space or anything like that but I do feel that it’s not yet been used to its full potential so I’m glad we’re doing our night there this summer.

DM: What elements drew you to the new locale and how do you expect or hope TOHU will capture the good old Sud-West vibe?

P: Lots of good things. First of all, it’s only 5- to 10-minute bike ride from Rosemont-Petite-Patrie and 15- to 20-minute bike ride from Mile End and Plateau Mont-Royal. Also, it’s very easy to access by the Highway 40. In many aspects, it’s quite similar to St. Ambroise, but this time there’s literally no neighbors around. So I think we’ll be able to push the sound a bit more, too. I expect a neighbourhood vibe, family vibe where people are chilling and having a great time talking and listening to music and, at some point, dancing.

DM: The Sud-West party was always geared at the working-class party people, a way to blow off some steam and still get a night’s sleep. Is that still the MO?

G: Absolutely. It’s always been pretty relaxed vibe with an end of night drunken dancefloor. And you can be home in bed by midnight. I mean, shit I’m hoping for the 6:30 a.m. kids to attend to also. This is my dream slot for DJing.

P: It’s for everybody. The fact that it’s a mid-week event and early attract a very wide crowd age-wise. People still love good music past 50 years old, for example, but they’re not interested in going to a club on a Saturday night. So having people of 20, 30, 40, 50+ years old, a few kids running around make Nord-East a family thing.

DM: I expect the music will remain in keeping with what we knew in St-Henri but I would like to know, what are your individual “fortés” in terms of reggae knowledge and know-how on the mix? How do you feel you complement each other as co-selectors?

G: It will be the same vibe musically. In terms of our differences, because Ghislain (Poirier) is a constantly touring musician and DJ, he tends to be up on all the newest tracks and leans heavier towards the dancefloor, and carries a serious knowledge of soca that I don’t possess. Plus he’s playing out and testing his own productions. I tend to lean heavily on the classic roots and ’80s/’90s dancehall tip. Ever since I started working with Studio One here at work, my classics game has stepped up even higher. It’s a good combo that covers a lot of ground. And we know not to play each other’s signature big tunes.

P: Exactly. I must say that my last album Migration, exploring the reggae/dancehall/dub tip is a direct result of doing this event. It’s a very inspiring context and perfect place to play new unfinished tracks.

DM: What have been some of your favourite reggae records out in the past year or two?

G: Shit, so many things come across my desk. I’ve been loving the Quantic “1000 Watts” record this month. I think Gappy Ranks and Jesse Royal are probably my fave of the new crop of conscious reggae dudes. And at the risk of this being too obvious a big-up, I think Poirier’s “Jump” (see the video below) is one of the best dancehall tunes in quite some time.

P: Busy Signal have been so consistent the last few years, always a favourite for us. Expect some Chronixx, Mungo’s Hi Fi and Riddim Wise tunes. Also, new and exclusive tunes by Face-T from his EP2 to be released at the end of the summer. Face-T’s “Fight Back” is already out.

DM: What other gigs/shows/releases you guys championing this summer?

G: I have kids. I just booked multiple nights at a Lego-themed hotel in California. Nord-East is my night out!

P: I’m just coming back from Tadoussac where I played for the Festival de la Chanson. Going to do two gigs in China for the first time in June. I’m premiering my new show Migration Soundsystem at Montreal Jazz Festival at Metropolis on July 1. Really looking forward for this one. Right after that I’m flying in Europe for five weeks, for a bunch of festivals. ■