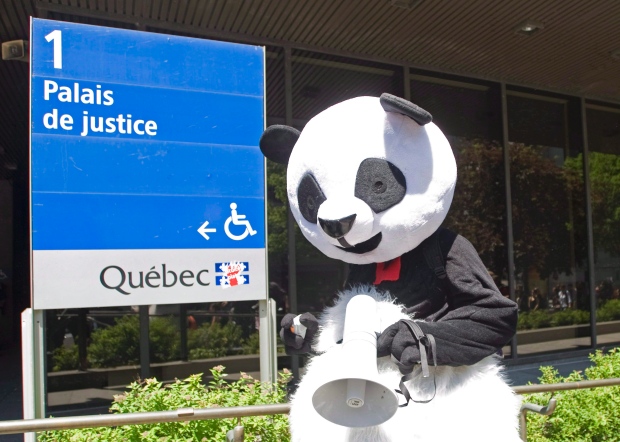 A decision by Quebec Superior Court that invalidates parts of Montreal’s P-6 by-law governing public assemblies isn’t quite the victory that free-speech supporters were hoping for. Judge Chantal Masse’s 124-page ruling on Wednesday tosses out provisions that forbid protesters from wearing masks, but supports the city’s requirement that protest organizers file an itinerary for protests — except when such demonstrations are deemed to be spontaneous, like a post-match sports celebration, for example.

The case was filed by Julien Villeneuve, a CÉGEP philosophy professor also known as Anarchopanda (because of the panda costume he wore to dozens of protest marches during the 2012 “Maple Spring” student strikes). Villeneuve sought to overturn articles 2.1 and 3.2, which were added by the city at the height of the student protests in May 2012. (The full ruling, in French, can be found here.)

The judge agreed that 3.2 — which forbids the wearing of a scarf, ski mask or mask “without valid reasons” at any public assembly, parade or march — was unreasonable and a violation of both administrative and constitutional law.

But Masse concluded the city was within its rights to require protest organizers to provide the location and route of any planned demonstration in order to allow police to block traffic to protect the safety of march participants. Since it wasn’t possible to apply that condition to spontaneous demonstrations, however, the judge said they should be exempt.

Obviously, the judge had a lot more than this to say in 124 pages. The bottom line, however, is that the city seems to be free to start using P-6 to issue $630 tickets to protesters again, provided police clean up their act in the way they apply it. (Municipal court judge Randall Richmond threw out three P-6 tickets in Feb. 2015 because of problems in the way they were issued, resulting in the withdrawal by the city of more than 3,000 tickets, which can be as high as $3,000 for repeat offences. They haven’t issued any other tickets under section 2.1 since.)

Even when organizers fail to provide an itinerary, Masse said that in itself doesn’t justify issuing tickets. Historically, most demos have been allowed to continue anyway, even though they are “illegal.” Although the judge said that both organizers and participants should know that they run the risk of violating the by-law, police can’t start writing tickets until protesters have been ordered to leave and fail to do so. “Not until there is an order to disperse by a peace officer are participants in an illegal demonstration under article 2.1 likely to commit a criminal offence,” (my translation), she wrote.

Masse didn’t address the problem of how, exactly, these orders to disperse are to be communicated, especially in larger demos that can attract 20,000 people or more. Nor did she discuss what happens when police use “kettling” techniques that effectively prevent both protesters and uninvolved bystanders from leaving because they are caught in police pincer movements.

So the ruling still leaves the city and police with lots of leeway in how to address “illegal” protesters. In the past, some marches have been declared illegal even before they begin while others have been allowed to wander the streets peacefully for hours. Masse said this discretion, the toleration of nominally illegal activities in particular circumstances, was a reasonable and normal exercise of police powers. The decision to declare a protest illegal was made five times in 2013 and twice in 2014.

Some will argue that the simplest way to take away that discretion would be for protest organizers to file an itinerary. But this isn’t likely to happen because, for many activists, filing an itinerary is tantamount to seeking the state’s permission to protest. In any case, for all practical purposes, an itinerary doesn’t really protect a rally from police disruption anyway. If violence breaks out, no matter how isolated, police will act regardless of any parade permits.

So the latest judgment doesn’t do much to resolve the conflict between Montreal protesters and policing tactics aimed at punishing the many for the acts of the few.  Regardless of the legality of article 2.1, its purpose is not to protect public order but to give police an additional weapon to intimidate protesters. As long as the threat of $630 fines and/or legal costs hangs over the heads of people who are gathered for no other reason than to protest injustice, there will be no justice.

If the intent is to protect public safety, police already have all the laws and tools they need. Existing Criminal Code provisions cover vandalism, arson or assault, police already have the discretion to arrest anyone for unlawful assembly, obstruction or breaching the peace. Article 2.1 is the by-law equivalent of dragnet fishing and is both unjust and a waste of the city’s judicial resources.

Mayor Denis Coderre should take this opportunity to scrap article 2.1 rather than renew its application. Otherwise, we could soon be looking at a court system clogged once more with massive protest bycatch. ■