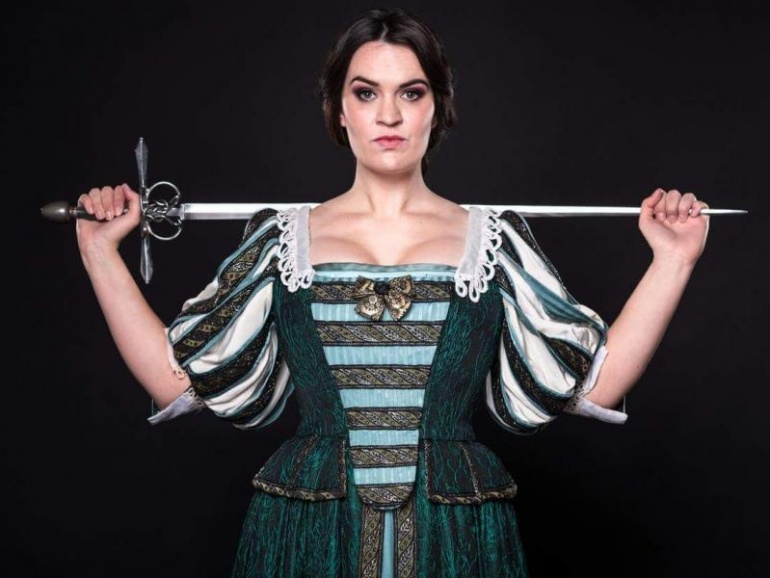 Gillian English in A Bitter Shrew

Here’s our second and final batch of reviews of ongoing shows at the Fringe Festival, which continues through June 19 (see the first batch, featuring a number of ongoing shows, here):

A Bitter Shrew, the one-woman stand-up show from Nova Scotia-born, Toronto-based actress, comedian and stage producer Gillian English is a laugh-out-loud hilarious storytelling adventure through English’s regrettably bad dating history that’s peppered with audiovisual aids, real-life sext specimens, fart jokes, running gags and even poignant moments of self-discovery helped along by sound advice from the likes of grandmas and boozy travel companions brought to life with spot-on accents. English casually sipped a tall can of Labatt Bleue as she made her way across the stage delivering zinger after zinger to the roaring audience with the utmost ease through her amiable and positively effervescent stage presence. This is definitely a highlight show from an award-winning performer who’s rightfully becoming a Fringe favourite from Montreal to Melbourne. (Lisa Sproull) At Montreal Improv Theatre (3697 St-Laurent), June 17 (5:15 p.m.), June 18 (7:15 p.m.)

A one-woman show stemming from a project undertaken by a Scottish arts group with a highly collaborative approach and a social justice orientation, this collection of true stories seeks to highlight where kindness is actually located versus where we like to think it is (spoiler alert: we’re generally wrong). The stories themselves, two from refugees and one (presumably) from performer Rachel Jury’s own life, are excellent examples of true kindness, even if the kindnesses are sometimes pointed out in a heavy-handed way. The performance itself, however, leaves me questioning how much kindness there is in literally co-opting real people’s voices by adopting their accents and telling their stories in the first person in order to showcase a performer’s range, however well-intentioned and worthy the project may otherwise be. (Kristi Kouchakji) At Black Theatre Workshop Studio (3680 Jeanne-Mance, 4th floor), June 16 (8:30 p.m.), June 17 (10:15 p.m.), June 19 (5:15 p.m.)

Bushel and Peck leaves the audience utterly confused about what they just saw. Is the piece a commentary on the subjectivity of art or an exploration of the creative process? Is it daring and provocative or meaningless and silly? All of those things and nothing at the same time?!

The show begins in the dark with Bushel and Peck (played by Fringe favourites Alistair Knowles and Stephanie Morin-Robert) scurrying around and speaking gibberish in cartoon-like voices. Finally, a small source of light illuminates the stage. The actors become completely enamoured by its existence and spend much of the show debating whether or not they should touch it. While the funny voices and facial expressions do lead to moments of roaring laughter, if one is looking for a show with a storyline or clear narrative, Bushel and Peck isn’t it. (Samantha Rudolph) Théâtre la Chapelle (3700 St-Dominique), June 16 (2:15 p.m.), June 17 (8:15 p.m.) 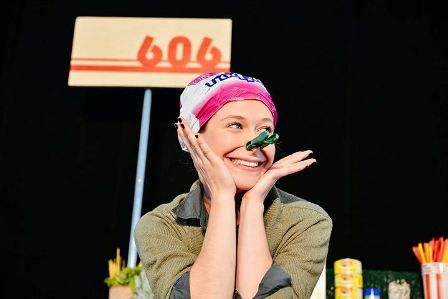 Performed out of a repurposed food truck, Checkout 606 (also being performed in French as Caisse 606) is a charming story in which two cashiers fantasize about escaping their mundane day-to-day and going on to win a synchronized swimming competition, but not without some drama. Using recitation, sound design and clever puppetry, the performers draw the audience fully into the fantasy. This is no easy feat considering the performance space means plenty of outside distraction, but it’s a testament to how witty and engaging the work is that even on Grand Prix weekend, decently sized crowds stood and enjoyed the full performance. (KK) At la Fille du Camion de Livraison Theatre (1 Rachel E.), June 16 (4:30 p.m., 7:30 p.m.), June 17 (3 p.m., 6 p.m.), June 18 (4:30 p.m., 7:30 p.m.), June 19 (3 p.m., 4:30 p.m.)

Vancouver duo Ragmop presents a dreamy and surprising lovers’ interlude that mixes dance, miming, sleight-of-hand magic tricks, puppetry, song and even creative flash-lit projections to tell a bittersweet story of a young couple in love who must meet only in her dreams after he’s tragically killed by a lightning strike. Mostly wordlessly, the pair projects the joys and sadness of togetherness and longing with graceful choreography across a cleverly designed stage featuring a stand-up bed and a magical mystery breakfast. Funny and tender, this show is perfect for those who need a little magic in their lives. (LS) At Mission Santa Cruz (60 Rachel W.), June 16 (7 p.m.), June 17 (4:15 p.m.), June 18 (7 p.m.), June 19 (3 p.m.)

Local sketch troupe Big Mall gathers a large ensemble cast together to present The Kicker, a scripted comedic play set in the early ‘80s that sees the cast and crew of a floundering TV series serve some much-needed comeuppance to their abusive producer. While the shoulder-padded costumes, cleverly selected all-Fleetwood Mac soundtrack and egregious it’s-funny-because-it’s-not-us sexism on the part of slimy producer Don place the action squarely in the era of Cagney & Lacey, many of the play’s themes — such as the struggle for women to be taken seriously as both producers and consumers of content and the complex balance between nurturing care and fierce competition that characterizes many women’s friendships and professional relationships — are ones that continue to hit home today. The play features some solid, if at times a bit reserved performances from the cast, with the script’s growing tension between lead characters Don and Heather being nicely offset by some zany physical comic relief from supporting characters like Don’s assistant Bakari and reporter-gone-rogue Mark. Altogether a solid choice for Fringers who like peplums, Fleetwood Mac and sticking it to the man. (LS) At MainLine Theatre (3997 St-Laurent), June 18 (10:15 p.m.), June 19 (5:30 p.m.)

Me, the Queen, and a Coconut

Highly animated Vancouver storyteller Andrew Bailey’s Me, the Queen, and a Coconut is a masterful piece of vocal performance in which Bailey relays with breakneck speed (while maintaining razor-sharp enunciation) the story of how he came to work at Windsor Castle at the age of 22, leading to the existence of an awkward photo of Bailey holding a coconut in the presence of a scowling Queen Elizabeth II. Like many coming-of-age stories, a major theme is the cognitive dissonance of learning that ideals you had unquestioning reverence for as a youth don’t always join you while crossing the pond of adolescence into the stone-walled castle of adulthood. In Bailey’s case, this turns out to be the rituals of the Anglican church, of which his beloved grandfather was a priest. Following his Granddad’s footsteps eventually leads Bailey towards a crisis of identity and faith, blessing him in the end with a life story arc that makes for a compelling, insightful and relatable story told with humour and conviction. (LS) At Black Theatre Workshop Studio (3680 Jeanne-Mance), June 17 (5:15 p.m.), 18 (11:59 p.m.), 19 (8:30 p.m.)

Gerard Harris was so worried that someone in the audience might give out spoilers to his storytelling show that on his opening night, he left out the ending. It was an accident, really (he’s prone to those), but Harris is so committed to his audience that he managed to chase down most of them to deliver the closing personally (in my case, a day later as his friends were trying to drag him off for drinks). What does this have to do with his show? Everything really, because Tales You Lose captures a slice of the frenetic life of this British raconteur’s OCD, ADHD world. I’d tell you more, but that spoiler fear was mostly aimed at me. What I can tell you is that I really enjoyed Harris’s engaging, hyperkinetic, intelligent yet self-effacing raconteur styling at *last year’s* Fringe (how’s that for avoiding spoilers!). This year’s show isn’t scripted (which as we’ve seen can lead to unexpected post-performance chase scenes), adding a little high-wire suspense to an act that will probably keep you biting your nails anyway. Harris is a riveting entertainer. What more proof do you need than the fact that most of the audience didn’t realize he’d left out the ending? (Peter Wheeland) At Mission Santa Cruz (60 Rachel W.), June 16 (5:15 p.m.), 17 (6 p.m.), 18 (10:15 p.m.)

Ubu on the Table

Take a surrealist play and add an absurdist twist and you’ve got Ubu on the Table, a tale of regicide and common kitchen instruments, a sort of MacBeth meets Mixmaster. This week, the la Pire Espèce production celebrated its 800th performance, and it’s not hard to see why it’s popular in both its original French and English adaptation. Funny, fast-paced and imaginative, the actors turn teapots into kings and mops into plotters in this puppet take on Alfred Jarry’s classic tale, King Ubu. Especially funny are the scenes of advancing armies (forks stuck in baguettes), eggbeater bombers and a hopelessly dysfunctional “debraining machine” in the form of a flat ruler. The play is also full of deeper references to history and literature, but you’ll be too busy smiling to notice. (PW) At Théâtre la Chapelle (3700 St-Dominique), June 16 (9:30 p.m.), 17 (4:30 p.m.), 18 (7:45 p.m.), 19 (3:45 p.m.)