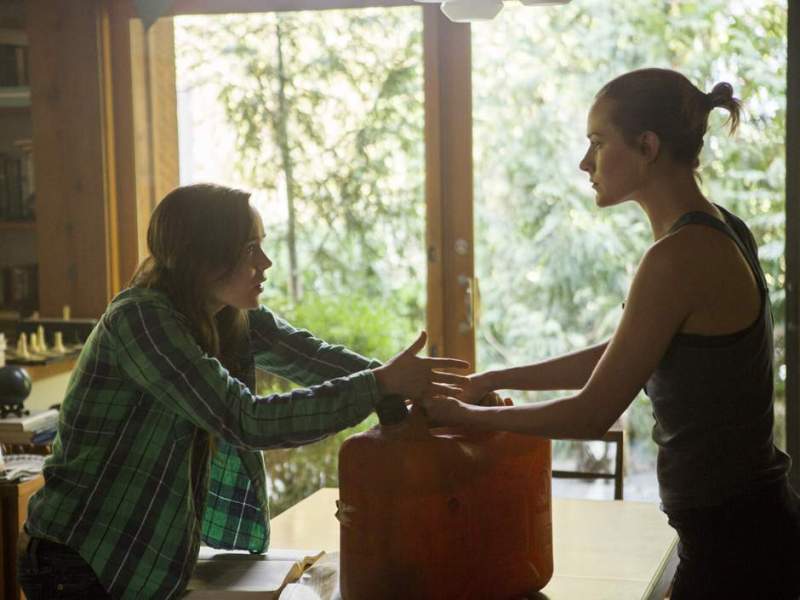 Ellen Page and Evan Rachel Wood in Into the Forest

One wouldn’t associate Patricia Rozema, director of acclaimed arthouse films like I’ve Heard the Mermaids Singing and When Snow Is Falling, with post-apocalyptic genre fiction, but that’s exactly what her latest film is. Into the Forest is a grounded, realistic look at what would likely happen if the world were to end at a slow creep, without the presence of zombies or aliens.

Ellen Page and Evan Rachel Wood play two sisters who live with their father (Callum Keith Rennie) in a remote country home. When the power goes off one day, it’s no cause for concern — until it becomes clear that the power outage is worldwide and that the chances of it coming back are minimal. Left to their own devices with limited access to rapidly dwindling resources, the sisters are left to make difficult decision after difficult decision while also avoiding both natural and human peril.

“That was the goal, to make it realistic,” explains Rozema. “To show how it would be first to lose power and it’s just a minor annoyance… Actually, I lost power here in my neighbourhood last night and I thought ‘Oh, the electrical company has cut all power to provide some relevance to my life!’ (laughs) Your first thought is the food in the fridge, then your second thought is ‘What if it goes on and on and on like in my film? Should I go to the gas station?’ You know, finding light would be the first thing and then… I really enjoyed it! We sat all evening in the dark with a few candles and there’s something very peaceful about that. The TV isn’t beckoning because you can’t have it. Actually, Ellen Page came over last night because she had just arrived and we sat here in the dark by candlelight! There was a kind of quality of stillness that was beautiful. I’m sure the beauty would wear off once we got hungry and all our food was spoiled.

“But, yes, grounded is a beautiful word and thank you for using it. I definitely wanted not to feel any comfort. I think there’s a comfort in apocalyptic stories that have zombies and comets and dinosaurs or whatever. In fact, it’s more haunting because of its possibility. I wanted to make something that was in a small part a how-to (laughs) to let people know that having one of those little flint fire starters is actually very important to create warmth when you need it. In fact, Ellen and I gave them as a crew gift to everybody.”

Into the Forest is based on a novel by Jean Hegland, and while the film retained much of the content, the scope of the film is streamlined. “The book kind of details how the world fell apart,” she explains. “It’s more incremental, with the rolling blackouts and the gradual adjustment to the erosion of civilization. We didn’t have time to do that in the film. (…) In the book, there are lots of wars, and the collapse of the banks and all of that… Everything you would expect, everything we all know about and that is happening right now. I felt it was respectful to the audience not to say anything about it.”

The film has a fairly bleak outlook on the future, one that Rozema doesn’t entirely share. “Well, now that I’ve made this film, we’re going to avoid it!” she laughs. “Do I believe we are headed for a global, society-wide collapse? I don’t know, I don’t know the future. There’s definitely a dystopian version of the future and a more level-headed one. When I see more careful, off-grid ways of living being taken very seriously, I have some hope. It’s possible — it is definitely possible.

“You know, when they have all these emergency plans. ‘Have three days’ worth of food and water!’ But no one ever asks: what about after three days? When our phones have run out? We don’t know anybody’s phone number anyway, we’d be running in the streets looking for each other. When there’s no more gas and we can’t leave the city. We’d be banding together, some people would be taking advantage of the chaos, some people would be particularly heroic, some people would just cocoon and keep their kids safe. That’s kind of the story in my movie, right, cocooning. I feel it’s not just a speculation of the future but also an observation of how we live right now.” ■

Into the Forest opens in theatres on Friday, June 3. Watch the trailer here: