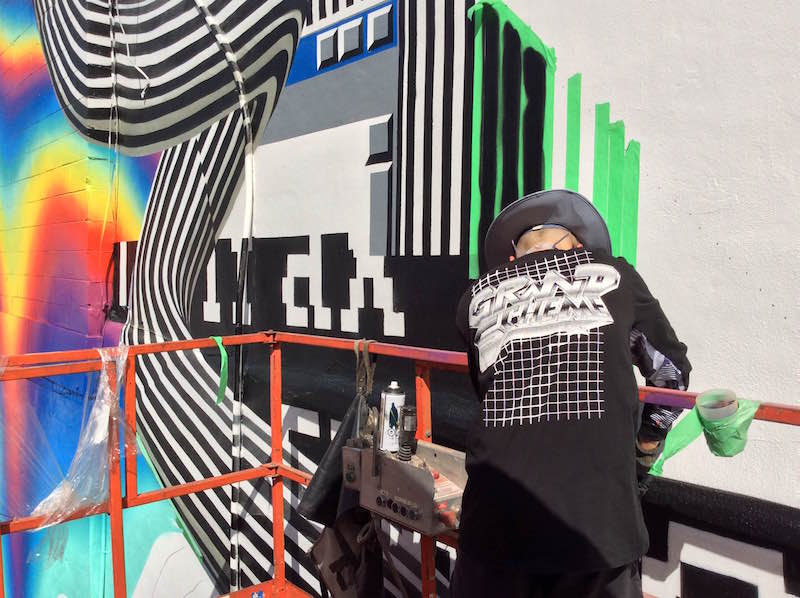 Having followed Argentinian-born artist Felipe Pantone and his work for years, it was an extraordinary experience to witness an exponential evolution of his work in such a short period.

Pantone, whose explorations with art through graffiti began at the age of 12, has taken the contemporary and urban art worlds by storm with his retro-futurist murals and installations, characterized by intersecting geometric patterns, mind-bending illusions and vivid polychromatic colours.

His compositions drive two-dimensional and three-dimensional spaces into constant chaos and harmony simultaneously, transporting viewers into a digital realm. Pantone’s ability to hack visual representations of retro computer interface designs in his graffiti, murals and installations confronts the viewer with his hybrid creations of disruptive black-and-white lines, pixelation, and retro Windows 98 styles evoking raw nostalgia and a sardonically playful approach to kinetic art.

I sat down with Pantone for an interview during Mural Festival’s fourth edition.

Mira Silvers: What are the feelings you convey?

Felipe Pantone: The certain feelings I try to evolve or convey are  all about the times we live in and technology through my compositions.

FP: It is a different feeling painting out in the streets than in your comfortable studio. It is not that much of a mystical experience as when you think of Salvador Dali. On the streets, you are thinking, “Hopefully the cops are not going to arrest me today, hopefully it won’t be too dark, fuck it is cold.” I don’t think street art is that mystical.

MS: What helps you to create?

FP: Most of the time, I improvise. Obviously I have some ideas that I bring from home, and some basic sketches and some direction and certain elements I want to include, and the rest I just let myself go and go with the flow. All the composition is basically freestyle. Here I had plenty of time — I’ve had 12 days so I could afford to sketch more and use the projector. Usually I have only three days — in that case, I don’t use the projector at all. 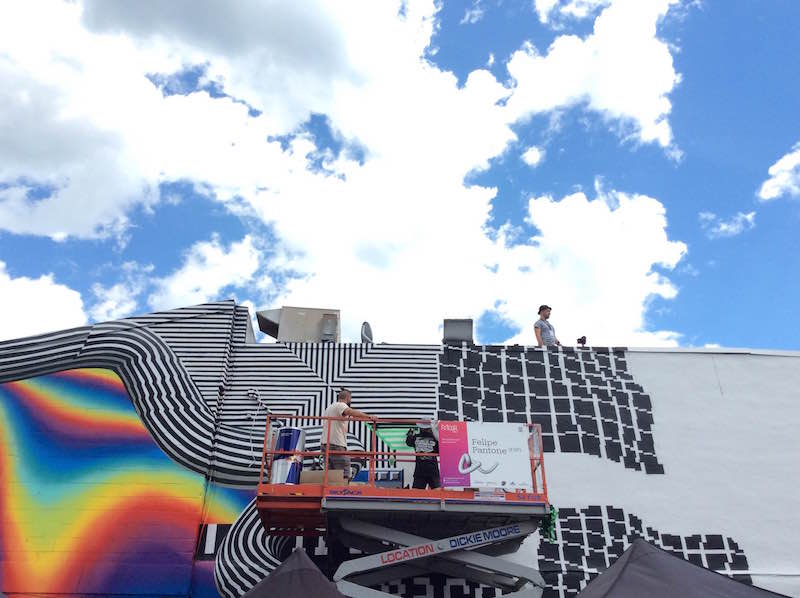 MS: In your work, there is a certain level of chaos and order or logic. What do the words “chaos” and “order/logic” mean to you?

FP: There is a lot of logic when it comes to the composition. As I said, I know exactly what I want to talk about. So I really think about it — I mean, nothing is for free. There is not a single element that I use in my work that I don’t know why I am putting it in. Everything — I thought about it. I guess you could call it chaos because I think they are very chaotic compositions, very dynamic intentions. But at the same time, I don’t get inspired. I think about things more than getting inspired.

There is this book, the only essay of Haruki Murakami, who normally writes novels, called What I Talk About When I Talk About Running, where he tells his story about being a novelist and a long distance runner as well. He makes really interesting parallelisms about how he as an artist, he is a long distance runner. He says, I am not a long-legged Jamaican guy that runs 100 metres really fast. No! As in, I don’t get inspired; the muse does come to visit me. I can start a novel any day of the week. I am a long distance runner because I train every day and I know what I am doing.

I really understand what he is talking about. For me, it’s not like I get inspired when I wake up in the morning and then be unable to produce for three months. No, I can produce a piece every day because I have a system. Everything is thought out. The dynamics of the composition is not for free either. It may look chaotic, but I know what I’m doing.

MS: When I see your work, I always have memories of the original Tron movie, Daft Punk, and Calculus.

FP: I think that makes sense. A lot of people say my work is really futuristic, but I think it’s not. There is some stuff from the past and some stuff from the future. So what I try to make is work that fits in the present. That’s my goal: to make work for the present, not the future. And I think Tron is from the past, but it was trying to be futuristic. It’s good — it reminds you of my work.

MS: There is a push-and-pull using the word “futuristic” to describe your work. What is it about futurism that audiences get so attached to when they view your work? Why do you think it’s hard for them to grasp that your work is the representation of the present?

FP: Well I guess you’ve been watching movies your whole life and are like “This is what the future is going to look like.” I think we’re living in that future. We have crazy phones that connect all of us. It is the future, in a way.

MS: How does technology influence your work?

FP: Spray paints are really good technology. Buff paints are really great technology as well. Rollers are super good technology and super useful. Computers, I mean everything. I mean I am saying this because a lot of people go, “Oh, you can’t use tape or projectors,” but spray paints, rollers and buff paints are technologies, too. In the caves, they did not have this kind of shit. I think it’s very important to make use of every kind of technology — whatever it is, like spotlights to light my wall at night, earphones to make me paint and be happier. Every technology is good, make use of it. I have no complaints or concerns using projectors. I never usually use projectors because I don’t have time, but, a lot of people use them. I would love it if I could press a button and the thing was going to be there painted — I would do it. It’s awesome!

MS: With the rise of the digital age, do you think art will change? Especially considering virtual reality stepping into the game.

FP: We are in the most exciting times, not only for art, but for everything. Now everything is changing, for real! Since the invention of the Internet, everything is super fast. A decade ago, we had some shitty phones and now we have phones that are computers. And that’s within 10 years. What’s going to happen in the next 10 years? Everything is going so fast now, so it’s a really interesting time for art. There are some things that are going to come out that we can’t even imagine because technology is really being invented every day. It’s super exciting.

I’ve thought for a long time now that people are doing more than just painting walls. I think painting walls is very basic and there’s a lot of super interesting stuff out there. People are trying to use a lot of different mediums right now, and VR is a crazy amazing space in another dimension, which is awesome.

MS: What are your thoughts on Google’s Tilt Brush?

FP: Tilt brush is more of an experience than to make a piece of art. If you want to make a sculpture in VR, I think it’s better to create it on the computer and then put it in VR.

MS: I read your manifesto. How did it come about?

FP: Well, I was in jail [for 11 days for a graffiti offence in Japan] and had nothing better to do. It’s based on the futuristic manifesto. I had a lot of things I wanted to put on paper and just did it. It is nothing too serious. The first rule is to break my own rules. Whatever I wrote there, I will break my own rules. It’s a good exercise to put things on paper. Sometimes, I look back and I think I was a young artist trying to tell some story. I don’t follow it now. It’s a thing of rules and I am really against that kind of thing. I mean, I just wrote it and never looked at it again. It was just a way to set some boundaries for myself. ■

Felipe Pantone’s work can be seen in the Mural Fest zone at the corner of St-Laurent and Prince-Arthur.

See dozens of Mural Fest 2016 works in our photo gallery.