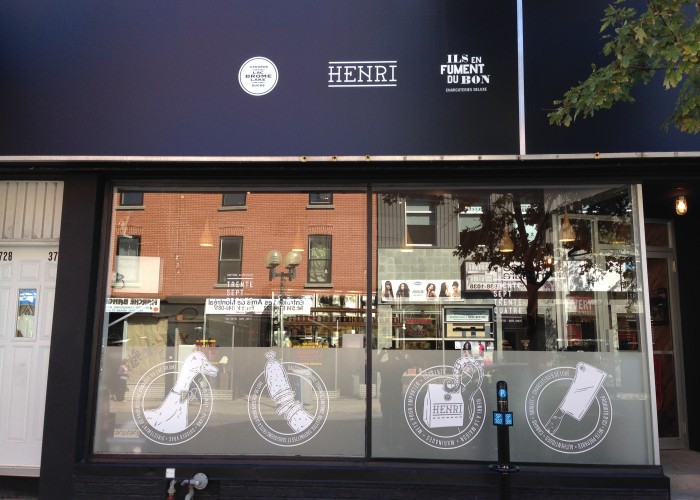 A gang of self-styled Robin Hoods were congratulating themselves last Saturday night after successfully terrorizing and bullying a young woman who had the unfortunate luck of having found work in a Notre Dame Street fine food store, 3734 Épicerie Comptoir.

Some 30 masked protesters entered the store just before closing and one of the Hoods stood in front of the lone employee, Eva Senecal, and warned her not to do anything while his associates looted the shelves of sausages and other goods. They fled shortly after to the train tracks running along the Lachine Canal and then dispersed, but not before spraying graffiti and posting leaflets claiming they were going to redistribute the goods among the impoverished residents of the neighbourhood.

It’s the latest and most visible attack on Notre Dame Street businesses targeted by petty vandals who say they’re fighting against the gentrification of the St-Henri district.

The gentrification of St-Henri, however, isn’t caused by a few hip businesses on Notre Dame. It comes from a large number of condo developments along the Lachine Canal that started near the Atwater market in the mid-’90s and spread west along St-Ambroise. The new housing replaced dilapidated industrial buildings that became ghost towns after the opening of the St. Lawrence Seaway in 1959.  So the new housing stock was mostly an addition to, rather than a replacement of, the low-income housing that has dominated the district for nearly two centuries.

St-Henri is still one of the poorest districts in Montreal, and a walk down Notre Dame or St-Jacques streets provides plenty of evidence that most of the local commercial businesses still cater to a less-than-affluent clientele. Sprinkled among the depanneurs, pawn shops, manufacturer outlets and discount stores, however, are goods and services aimed at some of the district’s newer residents, such as the “fine foods” selection available at le 3734.

Businesses like these are the targets of the Hoods, whose philosophy seems to be, “if I can’t afford it, I shouldn’t have to walk by a store that sells it.” It’s analogous to walking into a grocery store and vandalizing the fruit juice fridge because all you can afford are cases of Coke cans. Or demanding the SAQ stop selling anything but box wine. What makes modern grocery stores successful is the variety they offer, catering to a wide range of tastes and budgets. A commercial hub or artery functions the same way. Anything that draws traffic to one store often benefits the neighbouring businesses. Some St-Henri residents may not like being reminded that they can’t afford fancy Swiss sausages, but as long as stores like le 3734 aren’t driving the local IGA meat counter out of business, no one is being hurt. (Except all the slaughtered animals, of course. But that’s another column.)

The vandals’ claim that these businesses have created a “food desert for people with no  money” is insane. The truly poor eat at home, not in restaurants. A meal at McDonalds is just as out of reach as lunch at Joe Beef when 80 per cent of your welfare cheque goes to rent. And the prices at the IGA aren’t affected by specialty shops like le 3734 but by much larger market forces. Meanwhile, discount businesses like Boulangerie Multi-Marques on Notre Dame do a booming business selling surplus bread for $1.69 a loaf.

The fact that some stores sell goods that some residents can’t afford is hardly new to the southwest. Think about it for a second. For what type of business is Notre Dame famous? Exactly. And when, do you think, was the last time a welfare recipient went shopping for a Chippendale cabinet? Yet no one’s breaking into antique stores or spray-painting their windows.

I haven’t heard anyone credibly claim that it’s impossible to find dollar stores or fripperies in St-Henri since the hipster pubs moved in. If some merchants can’t stay in business, it’s usually not because of competition from high-end stores but because of a saturation of low-end competitors.

The misguided and malicious campaign against these small businesses wasn’t even the biggest disappointment in the news about the crimes committed at Le 3734. No, the biggest letdown was the reaction of people like Fred Burrill, a spokesperson for POPIR-Comité Logement, who had an opportunity to make the case for the need for social housing in St-Henri but instead blew his organization’s credibility with a ridiculous justification for the attack.

“These businesses actually are taking up a very violent role in the neighbourhood of excluding people, of making people who have been living here their whole lives feel as if they are no longer welcome in their own neighbourhood,” he told CTV.

What kind of twisted logic is that? Burrill was careful not to criticize the tactics of the vandals — which involved forcibly detaining Senecal under an implied threat of violence — but accused the victims of violence because they sell mildly pricey groceries!

In an interview with Radio-Canada, Burrill carefully dodged the reporter’s attempts to have him actually say something bad about actual violence. Instead, Burrill defended chains like McDonalds and Tim Hortons as being the kinds of businesses that neighbourhood welcomed, as opposed to places that sell “$5 lattes.” Because welfare recipients prefer the $3.39 latte at McDo?

Burrill even condemned local businesses for reacting to the attacks by installing surveillance cameras, saying the cameras were a message to locals that they aren’t welcome. Seriously? I guess the same goes for door locks and burglar alarms.

The Projet Montréal councillor for the borough, Craig Sauvé, didn’t hesitate to condemn the attack. Gentrification is a serious problem in the district, he stressed on CJAD’s Exchange Tuesday night. “It’s a fundamental economic issue, but by no means is violence, intimidation and theft the way to go about trying to bring this issue forth. And I question the legitimacy of such action and such people.”

Sauvé went to the heart of the matter, which is to ensure that new development projects incorporate a healthy measure of social housing. He pointed out that both Ottawa and Quebec have drastically cut back on funding for these projects, however, in the latter case reducing Accès-Logis targets from 3,000 to 1,500 units a year.

The goal isn’t to keep out more affluent residents but to ensure a healthy mix, Sauvé said. “Having well-balanced neighbourhoods is absolutely a priority for every city in the country.”

Tactics like we saw last weekend don’t help the cause, Sauvé said. “They made a lot of people (in St-Henri) very angry, upset, saddened… . It’s going to polarize rather than unify.”

The Hoods are no doubt bragging now about how everyone’s talking about gentrification, but what people are really talking about is how a gang of masked thugs are sending a message across the city that St-Henri prefers shuttered stores to thriving businesses.

If Burrill can explain how this message of contempt for local commerce will help poorer residents find work and affordable housing, I’m sure Sauvé would love to hear it. ■