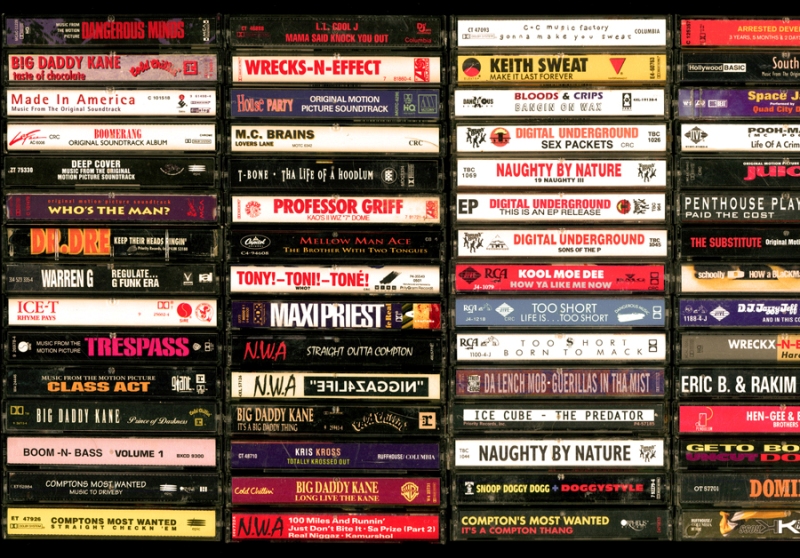 Yeah, sure — they warped, they broke, they screwed up your parent’s stereo. But tapes were the shit when you were a ’90s kid who didn’t have a CD budget and still wanted the biggest tunes in the fastest manner possible.

Hip hop and tapes share a complex history. Yes, the genre was born on turntables, but by the time rap albums became a thing in the early ’80s, cassettes were the dominant medium for the music. Before we had the podcast, we had the pause tape. Before we had the CD rip, we had the high-speed dub. And boomboxes will always be cooler than record players, bulky box CD machines and most certainly MP3 devices.

Montreal man-about-town Waahli “Wyzah” Yussef — you may recognize him as a mic controller in vet live rap outfit Nomadic Massive — pays tribute to the format this weekend at Artgang with an exhibition of ’90s rap tapes and related memorabilia, and we caught up to discuss the growing trend of the cassette comeback.

Darcy MacDonald: Please introduce yourself real quick for our readers.

DM: You’ve always come across to me as a renaissance man, maybe a little retro in spirit in general — where does that come from?

WY:  Maybe this is what some ’70s kids who love art are born to do. I’d say it comes from my curiosity. I love most of the things related to art. Growing up, I was exposed to a lot creativity, from attending cultural events like plays, seeing my older brother Chopin always creating more than one thing at the same time, I mean it definitely set the platform for who I am today.

DM: We live in this age of vintage cool and so on, so I won’t ask you why you think these things — vinyl and cassettes for example — make a comeback, but I do want to know: what is special to you about the hip hop cassette?

WY: Plain and simple, for me it’s a nostalgic thing. There’s a history of a time and a place to most of the hip hop tapes I bought back then. I grew up in the ’90s so it was my stomping ground in my era of self discovery. Like for example the fact that it was not always easy to find an album when it came out; sometimes HMV would have it and not Sam the Record Man. (Also) the sound that it makes when you fast-forward a song while it’s playing, which was not recommended, but I liked it. The feeling of exclusivity when I had a cassette that no one had yet. The fact that I needed to keep my ear in the street, eyes in hip hop magazines — like The Source, Vibes and XXL — to know what was popping. Also, I kept most of my tapes and love to listen to them once in awhile. There is music on these tapes that had never been released commercially.

DM:  Were you a kid that taped music off the radio and copied tapes with friends?

WY: Right on! I used to sleep next to my radio and record; a lot of good hip hop radio shows were during the night, like at 2 am. Sometimes I would press record and sleep and listen to my tapes in the morning and be surprised. It was an activity I was always looking for, kind of like a ritual. I had my favourite radio shows I used to listen to, like Masters at Work on CKUT 90.3 FM with Ken Dawg and Mike Mission. One thing I really didn’t like was when they were talking over a dope song while I was trying to record on my tape….but hey. Also this amazing deep house music radio show Utopia’s Paradise on CKUT with Tony Desypris. I definitely used to make copies for friends.

DM: What was your first rap cassette you bought with your own money?

WY: My first rap cassette that I bought with my little savings was this mixtape by DJ Juice that I got in Queens, New York. I couldn’t wait to bring it back to Montreal and share it with friends. There was so much exclusive material on it, freestyles from Big L, Diamond D and Jay Z.

DM: At what age did you make the switch to CD? Was cassette your format of preference until “the end”?

WY: Nah, I eventually switched up to CD but still kept my tapes. The music industry was making the transition from tape to CD, it kind of became obsolete, and if you were looking for (cassettes), you had to go to  second hand store, like le Colisée du Livre on Mont-Royal.

DM: People get really excited about these types of events now. Please explain how you curated it whose collections we’ll see and what else to expect — boomboxes? Should people bring their own tapes for fun?

WY: I feel it’s a natural progression from (when) I organized the ’90s Hip Hop Revival (events) in 2010 with the live band Groundfood. Let’s highlight the amazing artwork by Nik Brovkin who has been behind all the graphic art. That idea really came when I heard that the film from Stretch and Bobbito, Radio That Changed Lives, came out last October. I was like, let me combine the screening of it with an exhibition.

So I contacted Sagewondah from Artgang Montreal to share the idea and boom it came to life. The event is open the general public from everyone who is curious and loves art. It’s also for those that are interested in this era of hip hop culture.

People who will attend the ’90s Hip Hop Tape Cassette Exhibition will be witnessing an outstanding collection of boomboxes by passionate b-boy Matin Cholo, some amazing Marvel hip hop variant (covers) and a very unique creation with all the mechanics of a tape cassette by Chopin.

(Also), cassettes and vinyls of lots of ’90s hip hop artists, and some artifacts. And check it out: my man Lexis (MIMS) will be using two different units of tape decks to do a cassette DJ set. I’m looking forward to this one. Last but not least, a Montreal film premiere of Stretch and Bobbito’s Radio That Changed Lives on Saturday.

DM: While we’re here, congrats on the new Nomads record (The Big Band Theory) and please tell us what is in store for you guys this summer!

WY: Thanks, it’s been a long time coming. We’ve worked hard to create this record, respecting each member’s busy schedule. We have a couple of dates lined up for this summer, starting with the Montreal Jazz Festival on July 5 and 6 at the Savoy du Metropolis, at midnight. ■

To vote for your favourite Montreal musicians and groups like Nomadic Massive in the Best of MTL, please click here.

To read our latest To-Do List for things to do in Montreal, please do so here.