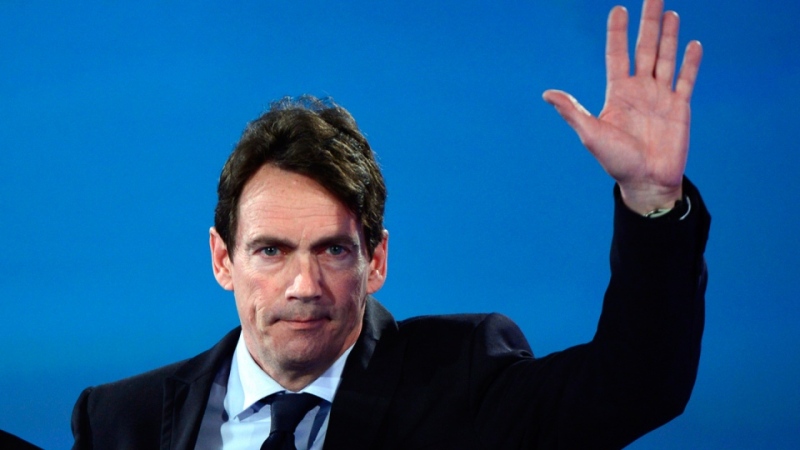 “Julie and I have three beautiful children that we love deeply. I want to be a good father to them and now I’ll be able to spend more time and share more with them.”

That was Pierre Karl Péladeau explaining why he was quitting his full-time job so that he could devote more time to his family.

“The gesture was unexpected,” wrote Gérard Bérubé in Le Devoir. “In a speech peppered with emotional breaks, (Péladeau) says he now wants to act in a consulting leadership capacity and allow more time for his family and his philanthropic works.”

Oh, wait, that was in 2013 again. My bad. Here’s what the 54-year-old Péladeau said Monday, in an unexpected resignation speech peppered with emotional breaks:

“Today, a lack of alternatives forces me to make a heartbreaking choice between my family and my political vision. Our political vision, which is shared by many citizens. I chose my family. … I make this decision for the sake of my children. I must, for them, remain a good example.”

I’m not sure what example Péladeau was trying to set yesterday, but it made me ill to see his resignation described as courageous by so many pundits and politicians.

Yes, leaving your job to care for your young family is courageous. That’s what my mother did, and that’s what hundreds of millions of mothers (and some fathers) do without question all over the world every day. And they do this often at great cost, both to their career and their finances, without anyone standing up in the legislature to applaud their bravery. Their choices often mean these women are underrepresented in our boardrooms and our governments, undervalued by society and unpaid for nurturing our children.

Péladeau, on the other hand, doesn’t even need to work. He was earning $8.3-million a year when he quit as CEO of Quebecor during that emotional 2013 speech. He owns stock worth at least twice that and could afford to support several hundred families without breaking a sweat.

Already, speculation is rife about Péladeau’s return to the Quebecor boardroom from the very people who are lauding his “bravery” in resigning for the sake of his family. That’s a little like congratulating an alcoholic for giving up tequila while debating whether his next drink will be scotch or Grand Marnier.

I don’t want to get too deeply into the personal details of Péladeau’s on-again, off-again relationship with Julie Snyder, the Quebec television producer and mother of his youngest children, Thomas, 10, and Romy, 7. (His eldest child Marie, 16, is from a previous marriage).

But the story of the PQ leader’s resignation is impossible to understand without that context.

I’m not pretending to have the inside track on what went on in their relationship, but the key sequence of events is telling. PKP quits as CEO of Quebecor to devote time to his family. Within months, he’s running the board of the province’s massive power utility, family promises seemingly forgotten. Six months later, rumours circulate that PKP’s thinking of running for the PQ, at which point we learn he and Snyder have separated after 12 years together. Péladeau takes the political plunge anyway, and a reconciliation takes place shortly after the election. The couple campaign together in the successful PQ leadership race, and they even celebrate a storybook  wedding in August, 2015. Five months later, Snyder again initiates a separation. Meanwhile, Péladeau starts to get his act together in the National Assembly as the couple undergo divorce mediation. To all appearances, Péladeau is hitting his stride, initiating major staffing changes and launching a dialogue with the leaders of other sovereignist parties. There is no hint, even to PQ insiders, that he wants to do anything other than lead the party to the next election and Quebec to sovereignty.

Then, boom. He resigns, ostensibly for the sake of his family, and ignores last-minute appeals to take more time to consider his decision.

You don’t turn 180-degrees virtually overnight — especially after waging an intense campaign to lead a party that supposedly espouses your deepest political desires — without some major epiphany. Or ultimatum.

Which is it? Well, if it’s an epiphany, Péladeau had the same moment of clarity three years ago. That didn’t stop him, shortly after, from taking on the extremely demanding job of party leader that could eventually lead to the even more demanding job of premier. Neither he nor Snyder can claim ignorance of the stresses of the job, nor on the likely toll it could take on a young family. If they didn’t think about that, then the decision to run was reckless.

Former PQ leadership candidates Martine Ouellet, Alexandre Cloutier, Bernard Drainville and Jean-François Lisée may be saying all the right things today at Péladeau’s political wake, but they must be seething at how easily the rich kid stepped onto their playground and took over the game. Any social-democrats that still remain in the party of René Lévesque are no doubt still angry that the anti-union “lockout king”  became the public face of the party that pioneered anti-scab laws, that the personification of corporate Quebec became leader of the party that once stood for workers and the little guy. But anyone in the party who still believes in ethics must be secretly relieved that the party no longer has to defend the “right” of its leader to maintain ownership of Quebec’s most influential media properties while campaigning to become its next premier.

Péladeau saw a prize he wanted and did what he always did as head of Quebecor: he went out and bought it. A year later, he was confronted by the fact that his private world wouldn’t accommodate both his political ambition and his love. Forcing back tears, he gave up his latest acquisition in the hopes that the gesture might somehow save his family.

Call it romantic if you want, but don’t call it courageous.

Courageous are the parents who lose decades of their peak career years raising children.  Brave are the many women who stay in failed relationships they can’t afford to escape, for the sake of the children.

Selfless are the parents who come home from work to shop for groceries, cook supper, drive the kids to soccer, hockey or ballet, help them with homework and then pack their lunchboxes for school at 6 the next morning.

That’s what Péladeau sacrificed on the altar of ambition, a sacrifice that most of his National Assembly colleagues make every day. Let’s not make his resignation out to be anything more than what it is: a selfish man choosing between ambition et amour.  ■