For Montreal symphonic pop trio Syngja, the upcoming launch of their debut album Lang Amma is the fruition of not just six years of writing songs and performing together, but also the fruits of weaving together four generations of family history spanning three centuries and 10,000 kilometres of transatlantic migration.

Lang Amma is the Icelandic word for great-grandmother — the title refers to Ingibjorg Johnson, great-grandmother of Syngja sisters Tyr Jami (cello, vocals, lyrics) and ZuZu Knew (artwork, projections, costumes) who lived from 1891 to 1994 and emigrated to Manitoba in 1926.

The album is lush, melodic and dramatic, folding together elements of Icelandic folk music, classical string arrangements and Top 40 pop structuring. The voice of Jami and Knew’s Lang Amma is peppered throughout as an ethereal presence linking the present to the past and making the project a highly personal endeavour for the sisters.

“Our great-grandmother would send tapes of herself singing in Icelandic to her relatives as letters,” explains Jami about the decades-old recordings that have inspired Syngja’s output since the project began in 2010. “They were just around when we were growing up, and we would listen to them, or even record over them by accident! We wanted to talk back to her.

A Canada Council grant is helping the band digitize and clean up the recordings, as well as transcribe and translate the poems, giving a whole new understanding of their Lang Amma to the sisters. 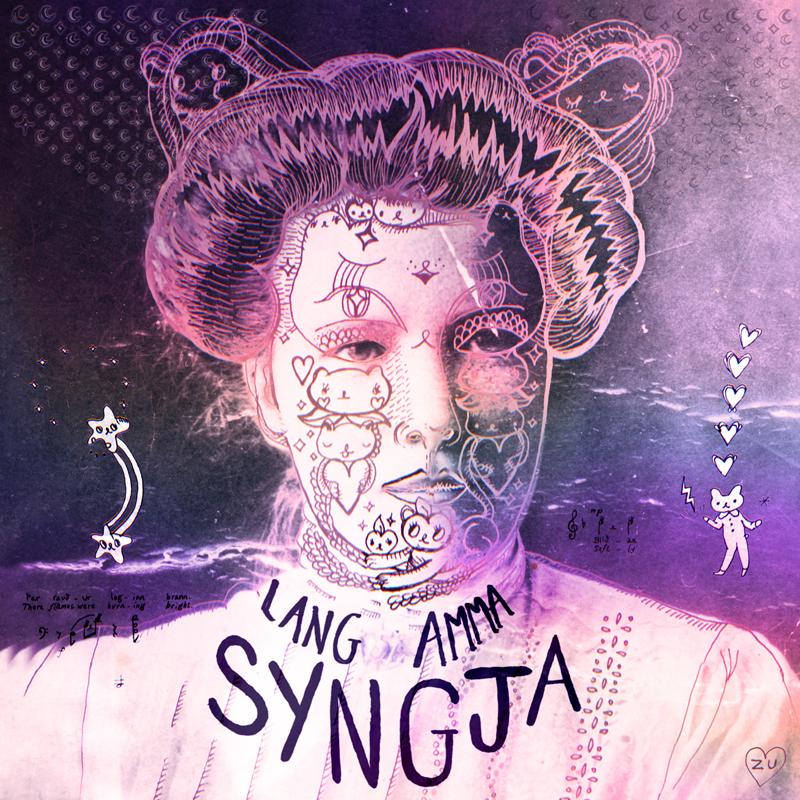 “We had no idea what she was saying until two months ago,” says Knew. “It was amazing, we printed out hundreds of pages of this translation and we’re still going through it and soaking it in. Even before we had anything translated, when I do projections and use her image and play her tapes, it really brings her into the room so much. I get chills every time.”

Jami describes how putting on a tape of Lang Amma inspires the progression of a song even in indirect ways. “A lot of songs on the album aren’t directly related to her,” she says. “They’re their own thing, but she’s the soul behind the band. We’re just nurturing from that point. It’s also about my life experiences and different poetical things and ideas.”

To present the work with the proper grandness of scope, the trio composed of Jami and Knew alongside Aleks Schürmer (theremin, arrangements, production) will be inviting a full string ensemble and dancers to join them for a very special one-of-a-kind show at the palatial Rialto Theatre this week.

Schürmer notes that the complexity of the string arrangements and inclusion of the theremin makes the live show an especially unique experience. “It’s definitely challenging music to play,” he notes. “We’ve been rehearsing a lot. The theremin is also Lang Amma—it’s this invisible electromagnetic force that you’re manipulating into a (hopefully!) melodious sound. It’s a ghostly voice from another plane of existence. When we were starting with me on theremin, Tyr on cello and the tapes of Lang Amma, it was so hard to tell who was making what sounds. It’s a very ethereal sound.”

“The theremin and the cello blend really well together,” Jami adds. “Because they’re both fretless instruments and we can play between notes.”

“A lot of the songs start out as solo cello loops with Tyr singing.” Schürmer continues. “Because they’re loop-based, they’re less about harmonic progressions and more drone-y. For me, that’s where the Icelandic folk reference comes in. Then we can speed it up, move it over, put something else on it and find some basis in pop music—following all those pop rules but doing all the wrong things with them.

“There’s also a lot of extra layers of things like hidden jokes and motifs from one song appear in another song. It’s almost more of a concept album in that way. The song ‘Pink Prism’ is stretched out into the same form as Diplo and Usher’s ‘Climax,’ but it sounds nothing like that. One song is like Philip Glass, Abba and the Beatles, with the same structural opening as ‘Glassworks’ but with an almost dancehall kind of beat. Very Philip Glassy, three on two confusing stuff. Disco strings is a great thing to do!’

“The music definitely exists in multiple places,” Tyr explains. “Even when it’s upbeat and dancey, it’s still kind of not that happy.

“Each song I wrote when I was at a turning point in my life, so it’s all about dealing with being very vulnerable and trying to heal myself and trying to go to the next state of life. Each song has its own time that it’s encapsulating. When Lang Amma sings, she talks about how sorrow and joy go together, and beauty and roses dripping blood and stuff like that.”

“There’s a melancholy, which I think is when you’re more creative, when you’re at a turning point.” explains Knew. “I remember talking to our grandmother (Lang Amma’s daughter) about tapes because we were so fascinated by them, and asking her, ‘what if you could press rewind on your life?’ and her taking a big drag from her cigarette and saying ‘yeah, a lot of us wish we could do that.’ That was pretty heavy for an eight year old!” ■

Syngja will present the album Lang Amma in its entirety with a concert at the Rialto Theatre on Thursday, May 19, 8:30 pm., $14. The first 100 entrants will receive a free download code for the album, which will be released to the public May 27 via Art Not Love.