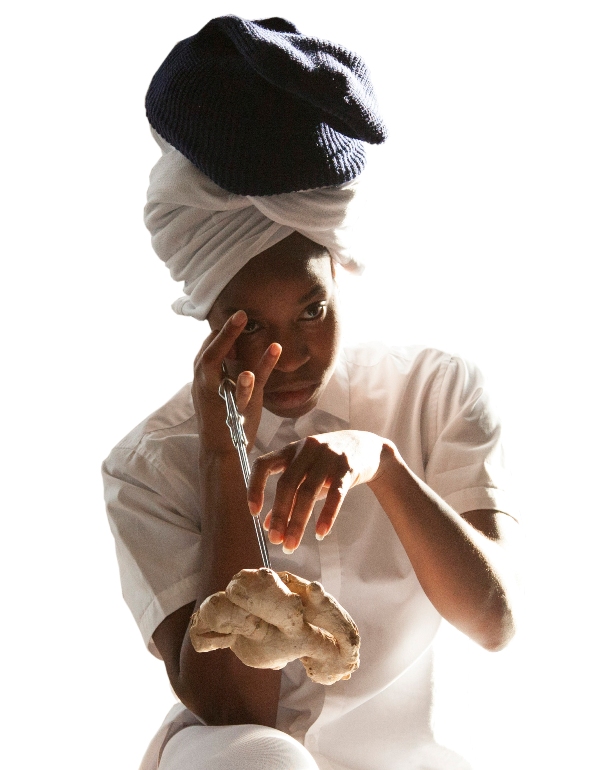 “I had a traumatic experience with a toy monkey as a child. It was a yellow, pot-bellied gelatinous monkey whose name was Harold.”

Dana Michel shudders while laughing as she reveals the backstory of her new solo that was originally going to be called I Hate Monkeys.

“My memory was warped and so I’ve grown up always thinking his name was George.”

When the choreographer and performer was young, her older sister would unexpectedly hurl the toy at her.  “So I made this automatic association with hating monkeys. Now with time I realize that I’m hyper sensitive and I just don’t like being startled. I don’t like being caught off guard.”

This childhood memory, coupled with watching anthropological videos of monkeys that made her feel squeamish about the likeness between humans and monkeys, led to the creation of her new solo Mercurial George, which premieres at the Festival TransAmériques in June.

She describes her new work as a continuation of her exploration of themes she touched upon in Yellow Towel, the critically acclaimed solo that notably made Time Out New York’s Top 10 performances of 2014.

“After I did Yellow Towel the first time… you know how you put the key in the ignition and you just rev up the car a little bit? It kind of felt like that.  It took the lid off of a box of all kinds of shit that I needed to look at, that I had no idea was even there.”

For Michel, “all kinds of shit” meant ideas of race and stereotypes of black culture. When she was young, she used to wind a yellow towel around her head to mimic the blonde girls at school. “I thought I was going to be making a piece about my hair and then everything exploded on its own into something that I needed to deal with, that I didn’t know that I needed to deal with.”

Created over the past three years in various residencies in Europe, Mercurial George continues where Yellow Towel left off.  With a suitcase of props, Michel continues to rummage through notions of cultural stereotypes, personal history and her identity as a black woman. “I suppose in some way with this next piece I feel overwhelmed with everything that I have uncovered.”

Working by herself and on herself is something Michel thrives on.  “For me, it’s the most direct root to the kind of things that I would like to deal with. There’s the least amount of friction and separation between body and subject or materials. It’s just the closest relationship that I have found.” ■