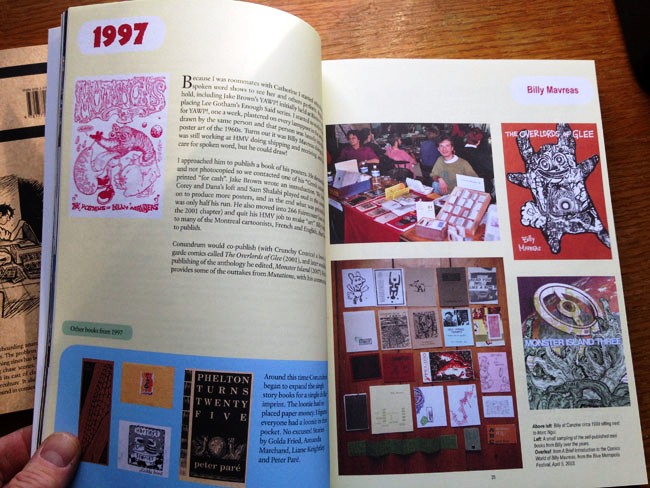 Founded in an apartment on Fairmount Avenue in 1996, Conundrum Press has grown from a tiny operation, whose earliest chapbooks were photocopied at Copie 2000 and sold in bars and loft spaces around Mile End, to an ambitious publisher of award-winning graphic novels.

In 20×20, publisher Andy Brown celebrates 20 years in the book biz by collecting new work from 20 of the dozens of writers and artists he has published, each one representing a year of the press’s operation. Their contributions—including memoirs of the early days, previously unpublished drawings and photo essays—are far more than the sum of their parts, showcasing the vitality of Canada’s arts community over the past two decades. 20×20 offers readers a road map of the contemporary Canadian underground, a place where writers, cartoonists, musicians and other artists have overlapped in the creation of an authentic handmade culture. 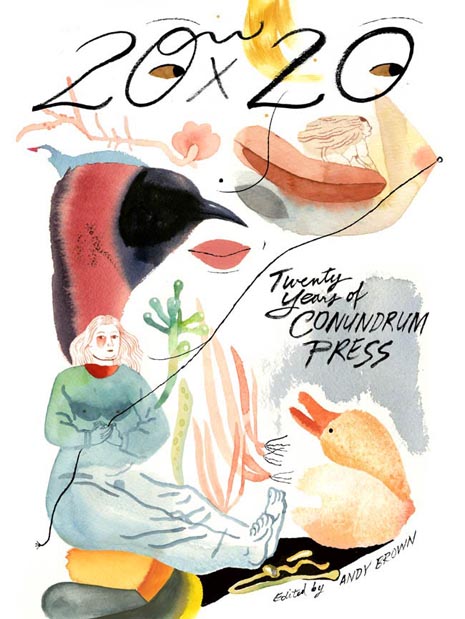 20×20 features a variety of creators, including art stars like Shary Boyle, who represented Canada at the 2013 Venice Biennale, and award-winning cartoonist and illustrator Jillian Tamaki, who contributes the cover of the book. Local legends who published with the press from its beginnings are also represented. Performance poets Catherine Kidd and Corey Frost and artist Billy Mavreas each contribute texts. In his chapter, Mavreas annotates some of the posters he designed for the 1990s Montreal cabaret series YAWP!, deriding the open mics and noting that few of the big out-of-town headliners advertised on his flyers actually made it over the border.

The entries covering the first five years of the press offer a rare glimpse into the often celebrated, but little documented post-referendum anglo Montreal bohemia, a low-pressure world of cheap rent and slacker vibes. Dana Bath’s memoir of publishing her debut story collection What Might Have Been Rain is a meditation on her life as a young writer from the distance of 20 years, a melancholy examination of community and loss.

As a publisher, Brown was the first to give many Conundrum artists exposure outside of the sometimes insular underground world of zines and DIY art shows. In one section he notes that re-packaging pre-existing zines into books available to a wider audience was always part of his mandate. The press also embraced other kinds of small-scale experimental publishing projects, including a series of single story chapbooks sold for a loonie, another series of small volumes sold exclusively in Distroboto machines, and the creation of Book du Jour, a book entirely written, edited and published on Canada Book Day 2000.

But 20×20 is not only about the past and it admirably avoids becoming buried under nostalgia. Brown moved the press to Nova Scotia in 2009, and Conundrum has since built a significant reputation as a publisher of graphic novels — including recent titles from Meags Fitzgerald and Dakota McFadzean, whose comic about a down-on-his-luck paranormal investigator is one of the book’s many highlights. His successful BDANG imprint translates the best Québécois graphic novels into English, most notably the renowned Paul series by Michel Rabagliati. Also in the mix is an impressive new international series, which has featured works by cartoonists from Hong Kong, France and New Zealand.

Brown returns to Montreal to launch the book on Saturday, May 7 at Monastiraki, the gallery and curiosity shop run by his long-time collaborator Billy Mavreas. Art and ephemera from Conundrum’s 20 years will be on display on the walls all month. 20×20 is a fitting tribute to the aesthetics and spirit of the press, and will be essential reading for anyone interested in the history of the anglo Montreal arts scene and Canadian underground culture more broadly. ■

Jeff Miller is the author of the short story collection Ghost Pine: All Stories True.