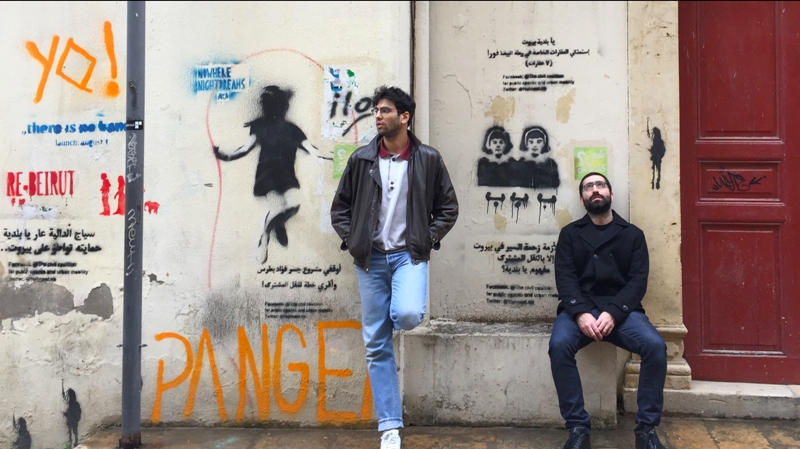 It’s been a busy year for Wake Island, and it’s about to get a lot busier.

Out is about to drop, a second album by a band in a period of transition. Wake Island have been known to split their time between Montreal and the motherland (Lebanon, or Beirut to be specific), but now that Nadim Maghzal has moved to New York City, they’ve raised their international stakes considerably. This summer they’ll take a break from building a presence in the U.S. to tour the U.K. for the first time, playing a series of festival dates as part of POP Montreal’s POP Off tour, alongside L.A. Foster and Foxtrott, before embarking on tours of Europe and the Middle East.

And though Wake Island’s drummer and bassist play on the new record, the band has scaled down to a duo — Maghzal and Philippe Manasseh. And (small detail) they’ve gone electronic.

“We’ve been playing together for about eight years,” Manasseh says, referring to his musical partnership with Maghzal, “and every time we had a band there was always this desire to include electronic elements. But we were too invested in this format of the rock band, with a drummer and bassist, so it always ended up being rock music that we were playing.

“We had this creeping desire to do electronic music, and the real trigger was that we ended up going to Mutek last year, and we saw so many acts and instantly knew that this is exactly the kind of stuff we wanted to do. But we realized that we had no clue how to do it!”

Last summer, the duo assembled the necessary gear and holed up in a remote cabin near Sutton, QC, and then in their Montreal practice space, to expand their knowledge of software until they had enough command of their tools to get creative. They returned to the cabin in February to make the album (recording drums at Montreal’s Breakglass Studio with Jace Lasek), documenting their progress in mid-transition from rock band to electronic act.

“The album was the first step, so our level of knowledge when we wrote and recorded it, that was just the beginning of the exploration for us,” Manasseh says. “The plan was that by the time we released the album, the live performance would be much more electronic. If you see our show today, it’s way more electronic than the record — it’s as if we’re remixing our own songs live.”

As Manasseh explains it, the transition did not come easily, requiring months of full-time work to get comfortable with sampling, incorporating new tools and getting over the stigma of using a laptop, but it has been nothing but rewarding, both on stage and in the studio.

“Most of the songs on the record were written before the real transition, so there was a lot of rewriting and adaptation, but we’re very excited because we have some new stuff that was written with this approach in mind. Something that is very important to us is that we still wanna be in the songwriting business — we absolutely wanna keep writing songs. Electronic music can sometimes get a bit cold, and we wanna stay warm, as much as possible, and keep the essence of what people like about songs and what we like about songs.”

The title of this record is partly an expression of relief that the album itself is finally out, but it has deeper meaning, both literal and figurative.

“It pretty much sums up the year for us in terms of personal achievements and philosophy, changing the way we see everything,” Manasseh explains. “A lot of this album was written and recorded in nature, and being outside of the city, outside of the house, definitely opened up our perspective of how we live every day. We’re always indoors physically and mentally, too. Even though we’re connected everywhere, somehow we’re further from each other than ever.

“And a lot of the lyrical content has to do with coming out as a gay man,” he adds. “I came out pretty late, when I was 27 years old, so a lot of the album was written as I was figuring things out. It’s very linked to what I was saying earlier: Being in the closet is very much about trapping yourself in and putting walls around you to reject anyone from coming in. The process of opening up is at the centre of this album; it’s not just about the gay thing, but this idea of the breaking down the walls that we put around us. It’s really about looking outwards.” ■

Wake Island launch Out with openers Woodpigeon and DJ s Frankie Teardrop and Kaz_Kandy at Bar le Ritz PDB (179 Jean-Talon W.) on Saturday, April 30, 8 p.m., $10 (nobody turned away for lack of funds)