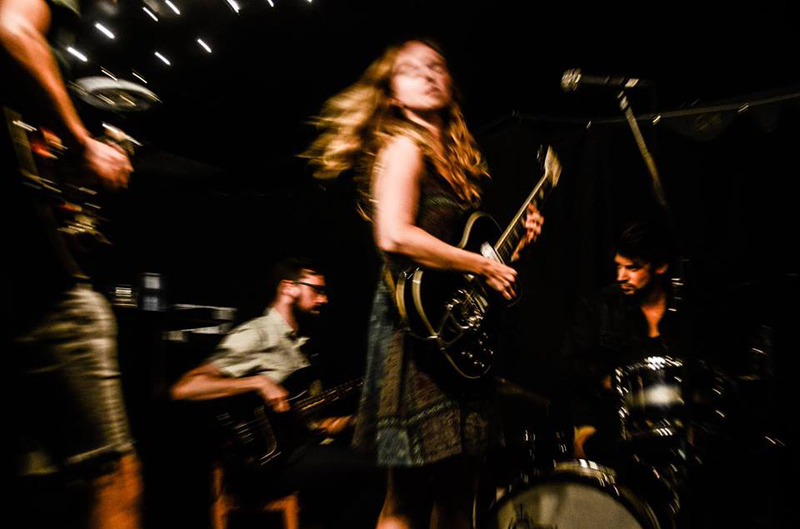 In 2011, at the insistence of a friend, I hauled my guitar to an open mic night in the heart of the city and it was there that I first saw Tamara Sandor perform, in a small intimate setting of songwriters and guitar strummers. I was riveted. Years later, when we formally met while volunteering at Rock Camp for Girls, I could still remember the melody to “Magpie,” the second track on TYNES, Sandor’s sophomore album, launching this week.

It was also at an open mic that Sandor first met Daniel Gélinas, with whom she would go on to record her first album A Bower in the Arsacides.

“We recorded over the course of a year, in different spaces that we had access to at different times,” Sandor says. “It felt like more of a collage of moments as we were piecing together a lot of different things. Like all the way up from percussion to whatever, all these things, messing around. It felt a lot like play.

“At the time of Bower, I was used to playing solo and in a more intimate way,” she continues. “Nowadays it’s not my favourite thing to do. I did it for a long time back in Hamilton, it was my primary way of performing. I find it to be totally different from playing with a band and that’s what I’m exploring more now.”

Sandor considers TYNES a transitional step in terms of a shift from writing individual songs and then arranging them for a band during recording, towards writing songs while considering the final product with a band in mind. The recording of TYNES was a two-part process that involved first recording bed tracks at Breakglass Studios with Dave Smith.

“I kind of thought that after that it was done. I was like, ‘Okay cool, we made an album, that’s how you make an album.’ But after listening to it after a little while objectively and with the feedback of other people, we agreed that it should have more stuff on it. That’s when Greg Burton of Bantam Wing joined in and co-produced the overdubs with me.”

Sandor and Burton are both part of the local collective Oh Hi, one of the promoters behind Sandor’s album launch, along with Passovah. When Sandor first came to Montreal to study English literature, her music community was limited but these days she is an active member of the Montreal-based project aimed at creating a supportive framework for local artists.

“I learned so much from those people,” Sandor says. “Everyone has so much wisdom and knowledge to share and you just pick up on how people do things. There’s a million ways to do everything in music in terms of your approach and how you bring people together and process and so on. With the collective, I get to see up close how some other people do stuff, which is so helpful.”

With TYNES, Sandor delivers a stirring, melancholic, and at times hypnotic folk rock album. “A lot of the songs on TYNES are from a long time ago, but I’ve been obsessing about a lot of the same things for a long time,” she says. “So there is definitely thematic cohesion in it.”

At the time of crafting TYNES, Sandor was inspired by Sharon Van Etten, although she’s not sure it comes across in the sound. Still to be found in TYNES are the Moby Dick and Melville influences that were at the heart of Bower, and the themes of “wild” vs. “civilization” that Sandor delved into. It’s no surprise to find out that Sandor has a background in English Literature and an affection for words from the past. The title of her sophomore work is an indication of the themes that Sandor plays with throughout its seven tracks.

“Tynes is a word that came up in the lyrics during the writing process. I don’t quite know why,” Sandor explains. “The lyrics are ‘…and now I fear that if I turn my mind away from the cradle (with a baby in it) my babe will sprout coarse and vicious tines’. The image refers to us being soft and accessible and in contrast, tines are pointy little things like the tines of a fork or like cat’s claws that can retract or project out.”

“I didn’t think about this at the time of putting a collection of songs together for TYNES,” Sandor continues, “but now upon reflection, the album definitely explores concepts of self-defence, membranes and boundaries. There are questions about how permeable or non-permeable those boundaries should be, how prickly or not. It’s this ambivalence and confusion about something like the defences we have which can sometimes crop up when you don’t want them to. But then sometimes, it’s really important that they do. They are there for a reason.” ■

Tamara Sandor launches TYNES with openers Quaker and StrangerFamiliar at Casa del Popolo (4873 St-Laurent) on Thursday, April 28, 8 p.m. $8/$10 with a digital download/$15 with a CD