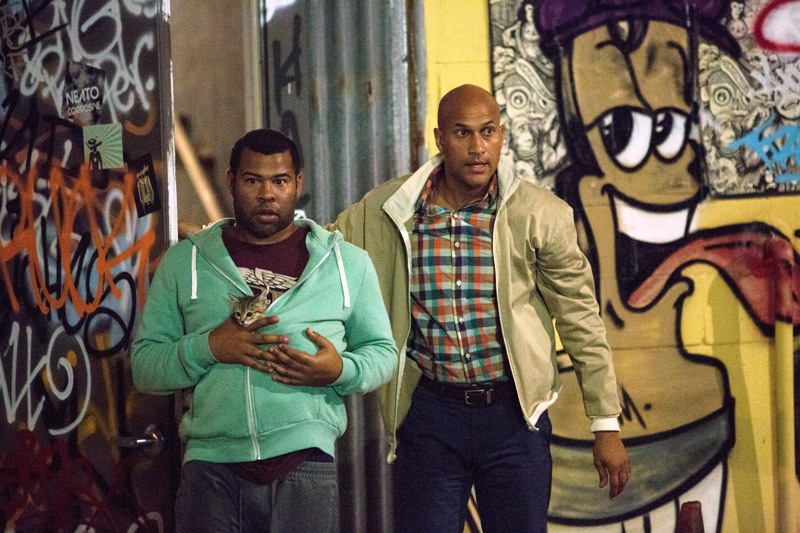 Expanding a sketch premise to a full movie has rarely, if ever, been beneficial to the material. Even the cases that did work (Wayne’s World… others, I’m sure) had to make a significant move away from the core concept. The instinct is always go bigger, gather more resources to play with and flesh out the backstories of characters that often do little more than one or two things per sketch. The downside is that this often ends up spreading things too thin as evidenced by the great majority of films born from Saturday Night Live sketches.

It seemed inevitable that Comedy Central’s Key & Peele would eventually move to the big screen. the already-cinematic eye of director Peter Atencio during the series showed that the move would require minimal upscaling and their love of cinema was made apparent throughout the series. Keanu isn’t really an adaptation of a specific sketch but more like an expanded idea for a sketch. While it’s very much in line with what they did on their TV show, it’s hardly a Run Ronnie Run situation.

After a particularly harsh break-up, Rell (Jordan Peele) is comforted by the appearance at his door of a tiny kitten he adopts and names Keanu. Keanu turns Rell’s life around; he inspires him to start working again and gives him a reason to want to live. When Rell returns from the latest “Liam Neesons movie” with his cousin Clarence (Keegan-Michael Key), he finds to his dismay that his house has been broken into and Keanu has vanished. Rell learns from his drug-dealer neighbour Hulka (Will Forte) that his home may have been accidentally targeted and that a drug dealer named Cheddar (Method Man) may be in possession of Keanu. The buttoned-down, dorky Clarence and Rell (under the highly inauspicious nicknames of Tectonic and Shark Tank) must enter the world of the Blips (“they’re the guys who got kicked out of the Bloods AND the Crips”), a criminal underworld extremely far removed from their own realities in order to bring Keanu back home.

Keanu has been presented in most avenues as a parody of 2014 Keanu Reeves movie John Wick, with which it shares a similar pet-based motive, but in truth it has more to do with “hood” films and various urban action movies of the David Ayer variety. (Apparently, production on Keanu began before John Wick was ever released, though the story doesn’t say if the cat was named Keanu so early on.)

Key and Peele’s overarching concern on their television show was with the performance of blackness. Often, they played characters inhabiting an atypical blackness or having a certain form of blackness applied to them against their will (this movie theatre hecklers sketch is a good example). Keanu is an action movie parody, yes, but it’s also based around the fact that while these dudes may outwardly appear a certain way, it doesn’t come automatically to them to hold their own with some career criminals. Rell’s convinced that dropping his voice an octave and letting the n-bombs fly will make up for his crippling insecurity, while Clarence adopts an unhinged persona that threatens to come crumbling down when his love of George Michael is exposed.

Keanu is smart-stupid comedy, silliness with a point, and the creative team behind it has chosen the perfect vehicle for it. It helps that its action scenes are taken relatively seriously. Most of them wouldn’t be out of place in a regular action movie (albeit with a cute kitten running around) and Atencio’s eye for the action scenes means the film remains ever-so-slightly grounded even when it involves a Mexican standoff with a certain comedic actress playing herself. It used to be that action-comedies either leaned too much on one or the other; Keanu remains firmly planted in the Key & Peele universe, but it’s well-made enough as an action movie and goes deep enough in its humour to feel like more than a sketch with explosions.

Considering that cute cats have cornered a not-insignificant corner of online celebrity and that a handful of Internet cats are straight-up millionaires, their move to Tinseltown has been rather protracted. Keanu the cat features front and centre in Keanu and I must point out that there is some excellent cat-wrangling throughout the film. Considering I can’t even get my own cat to stop stepping on the keyboard as I write these words, the cat direction here is excellent. If the film doesn’t exactly expand the horizons of Key & Peele, it certainly sets the bar ludicrously high for cat-based cinema. ■