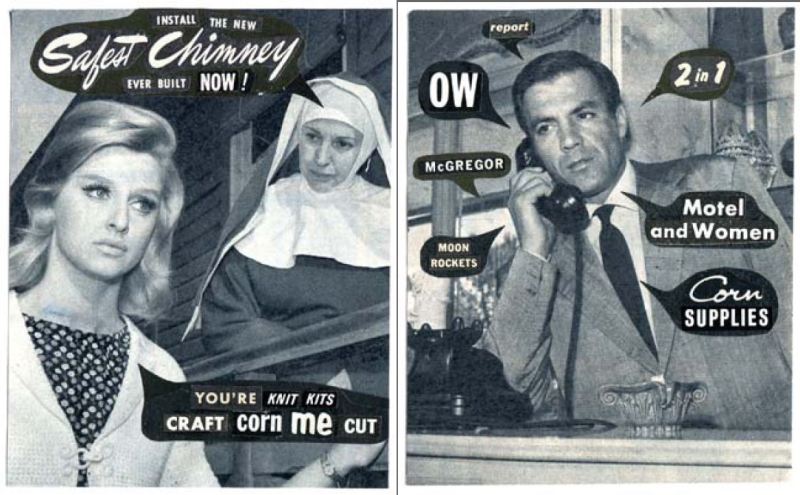 Montreal artist and cartoonist Julie Doucet has been a fixture in the underground comics world for 25 years. She’s perhaps best known for her Dirty Plotte series, which won her the 1991 Harvey Award for Best New Talent. Doucet stopped making comics 10 years ago, venturing into other visual arts including collage and sculpture.

With her newest project, Carpet Sweeper Tales, Doucet returns to her narrative roots. The book combines images from Italian fumetti, or photo novels, with text from old advertisements to create a comic book love story that is laugh-out-loud funny. I spoke to Doucet about Carpet Sweeper Tales and her evolution as an artist.

Adrian Knowler: What’s Carpet Sweeper Tales about?
Julie Doucet: It’s not like I thought about it as a message in that way. The book is more about how I did it. I took leftover cut-out words from projects — a number of very small projects that can be found in bookstores in Montreal — and used it in this one. I got really interested in made-up words and phonetics. I start with the words that I cut out and what I see, so I have no idea where I’m going. I get inspired by the words. It’s very much about the process.

AK: How did you find the fumetti and advertisements?
JD: I found them in a church basement bazaar. They’re 1960s magazines, in French — they were translated from Italian into French. They’re very cheap and cheesy romantic stories, very simple stories. I chose the larger pictures (for reprinting purposes), because the originals are not high quality photos.

The text comes from old women’s magazines, like Good Housekeeping and Better Homes and Gardens, from the 1950s. I chose to use those home magazines because they used many different fonts, and are mostly black and white, which is good for reprinting.

AK: You said in an interview with the Mirror 10 years ago that you had to fight your cartoonist label for your other art to be taken seriously. Are you still facing similar obstacles?
JD: No. Over time I’ve done quite a lot of different things, different visual arts, literature and film also. My reputation is more varied now.

AK: What can we expect from you next?
JD: I’m going back to drawing, which I haven’t done for quite a long time, at least six years. I had a mental block, I just couldn’t do it anymore. But what happened was the Charlie Hebdo killings, you know? That really, really shook me up. The next day I could draw again.

AK: What was the first thing you drew after the Charlie Hebdo attacks?
JD: Some dirty drawings. (laughs) After that I decided, okay, I want to draw again, but I don’t want to draw what I used to draw. I went back to the basics. I borrowed anatomy books and started to teach myself to draw. So I’m working on that. I have no idea what it’s going to become. Really no idea.

AK: You studied fine arts at CEGEP, correct? Did you learn traditional drawing methods there?
JD: No, no. The drawing classes were pretty shitty. I never learned to draw that way. I just don’t want to use the same cartoony style. It’s boring. Of course it’s very comfortable, like being in a pair of slippers for me, but again, it’s not very interesting. I’d like to do something else. I don’t think it’s going to be something that you’ll see in a gallery or anything like that. I’m not sure it will be comics either. But I really don’t know. ■