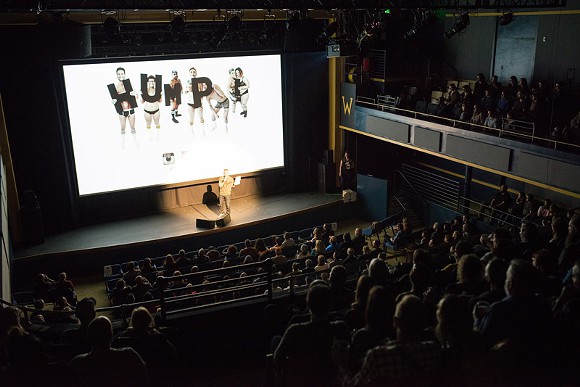 Dan Savage on stage at Hump! in Seattle

Although Savage won’t be in Montreal to host the screenings at Cinéma du Parc this week, we spoke to him in order to get a better idea of what to expect when Hump! comes to town.

Alex Rose: How has the tour been going so far?

Dan Savage: It’s going great! People seem to love it, so hopefully we’ll get some submissions from more cities in future. (…) We hope to get some submissions from Montreal next year, that’d be great. Unlike other film festivals, there’s no charge to enter a movie. There’s $15,000 in cash prizes given to the filmmakers by the audience in Seattle through special balloting, and every film that goes out on tour, the filmmakers get a percentage of each ticket sold. There are incentives to encourage the filmmakers. We’ve had amateur, aspiring filmmakers get into the festival and use the money to finance their next film that isn’t porn!

AR: When you put together the sequence in which the films will play and curate the actual films that will play, is there anything you keep in mind?

AR: I did notice when I was watching the films that the care put into most of them is something that I’m not used to. You don’t often see, say, penetration that’s well-lit — that’s, you know, made to look nice. How many submissions do you get, generally speaking?

And there’s this wonderful thing that happens at every screening. We watch the audience at every screening; for the first third, people are really knocked back in their seat by the things they wouldn’t click on — not my plumbing, not the body types I’m attracted to, and so on. Then about a third of way, no one’s back in their seat anymore. Everybody’s cheering and clapping for every film, even the ones that aren’t their thing. There’s just this point where the audience flips from only being able to perceive the differences to seeing everything that’s the same. Under that thin layer of gender or orientation or desire, there’s a thick layer of crap that’s the same for everybody: humour, desire… that’s the same. ■