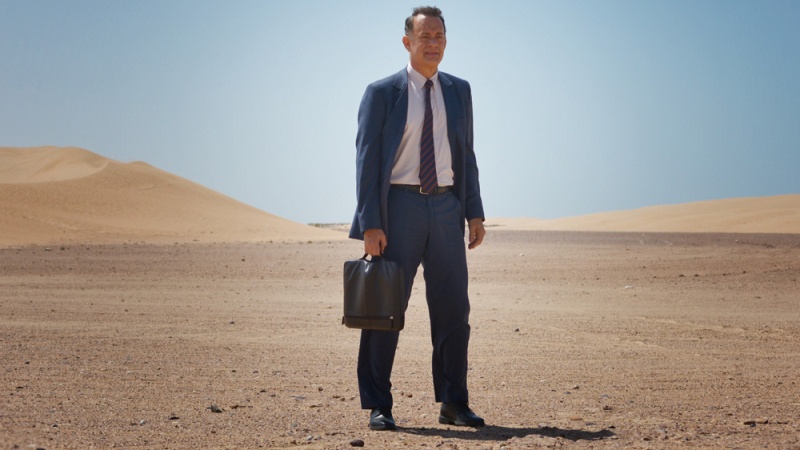 Even 10 or 15 years ago, it seemed inconceivable that a film starring Tom Hanks would slip into theatres almost unnoticed. No A-list star bats 1,000 critically and commercially, but as the best-loved man in Hollywood, Hanks has come the closest; even his most undistinguished projects had some kind of pre-release hype.

Unlike, say, Bruce Willis, Hanks is still trying — this isn’t him playing a bad guy who never gets up from behind a desk in a movie starring Josh Duhamel. A Hologram for the King is based on a well-regarded novel by Dave Eggers and directed by Tom Tykwer, a director with a certain arthouse cachet (Run Lola Run) whose attempts at the mainstream were received more coldly. The problem with A Hologram For The King is not that it sucks and that it’s being buried by the studio; it’s that it’s A Nice Little Movie™  that never aims for anything else.

Alan (Hanks) works as a marketing executive for a Boston-based IT company whose big innovation is a telecommunications system that allows for hologram-based conferencing. He’s tasked with pitching this system to the king of Saudi Arabia, who’s planning to develop an arid stretch of the desert into a bustling, Dubai-esque playground for millionaires. Alan arrives in Jeddah and careens into the archaic ouroboros that is the Saudi business world: meetings are routinely delayed if they’re ever confirmed at all, important people are in the wrong country when you need them, the wi-fi doesn’t work, there’s no food for the rest of Alan’s team and getting anything done requires jumping through innumerable administrative hoops. What’s more: he keeps missing his shuttle to the desert, requiring the intervention of dopey taxi driver Yousef (Alexander Black); there’s no booze in Saudi Arabia, but there is a Danish payroll supervisor (Sidse Babett Knudsen) who’s taken quite a shine to Alan; and, through it all, an unsightly boil grows on his back, requiring periodic visits with a fetching but reserved doctor (Sarita Choudhury) who catches Alan’s eye. 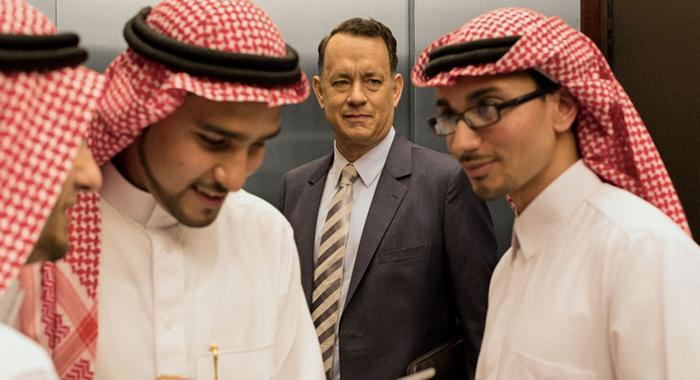 As he’s aged away from his younger, goofier self, it’s become increasingly hard to see Tom Hanks as somehow capable of failure; in his last films he has been benevolent at worst and heroic at best, which made his casting in this film somewhat suspect for me at first. The character of Alan is essentially Will Ferrell in straight-man mode, a fundamentally decent person who nevertheless gets incessantly shit on by life. He’s not the dependable, all-American guy that Hanks plays in Bridge of Spies or Captain Phillips; he’s a guy whose major career achievement was showing the world that American companies could outsource their work to China for cheaper, thus making him both a shrewd salesman and a pariah to the working class.

A Hologram for the King works best as a vehicle for Tom Hanks, chipping away at his wholesome dependability until they find the man inside. Spoiler alert: this movie has Tom Hanks vomiting on top of the blood stain he’s left after attempting to lance his boil with a steak knife. I don’t believe Walt Disney does anything like this in Saving Mr. Banks.

I haven’t read the Eggers novel the film is based on, but it’s easy to see its skeleton in the film, which veers wildly from genteel fish-out-of-water comedy to biting satire to tender romance in its third act. Adaptations of novels like this typically pick one tone or through line and lessen the impact of the others, but here Tykwer has ambitiously attempted to make a film that covers it all — with limited impact.

There’s an absurd exploration of the futility of bureaucracy run amok somewhere in here, but it’s soon upset by the film’s stranger-in-a-strange-land approach to humour, which puts Clay in such situations as having a Saudi villager believe he’s in the CIA or wandering awkwardly through a wild party full of half-naked middle-aged management consultants. It opens with a wild, weird half-animated sequence that has Hanks warbling through the Talking Heads song “Life After Wartime,” only never to utilize that type of energy again. It’s all droll without ever being laugh-out-loud funny; the love story is cute without being all that involving or believable. A Hologram for the King is a movie that has all the ingredients in the recipe but not the quantities; the eyeballed result is alright, but mostly lingers in my mind as A Nice Little Movie™. ■

A Hologram for the King opens in theatres on Friday, April 22. Watch the trailer here: