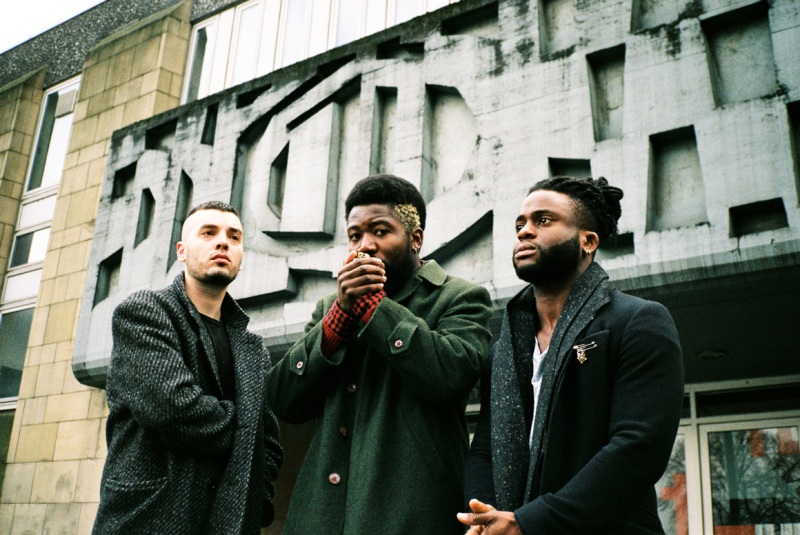 On the first night of last summer’s Osheaga festival, I wandered out to the Valley Stage to catch a group whose buzz had been directly in my eardrums all day. “Are you gonna see Young Fathers?” “You need to see Young Fathers.” “You should make sure to see Young Fathers play the afterparty.” And so on, and so on. So I decided I should check out the band from Edinburgh,  Scotland, sound unheard.  I’d always just sort of assumed they were, like, I dunno, a shoegaze band from Boise, Idaho, or some shit.

As I made my way into the healthy crowd gathered at dusk, pummelling drums swallowed me right in and spat me back out half an hour later when the onslaught of percussion, low end rumbles, and melodic harmonies ranging between rap, soul and rock ‘n’ roll came to it’s staggering conclusion.

Two shoulders over from me, by happenstance, stood Montreal’s Ghostbeard, local scene builder and ambassador for Ninja Tune and its Big Dada imprint, on which the band released their 2015 LP White Men Are Black Men Too.

He saw the look on my face, laughed and simply said, “I’m so glad we signed those guys.”

At a rare loss for words, I started to try to explain how little I had known, and how…

“You thought,” said Ghostbeard, not sparing me a little good natured ribbing.

It’s true — I “thought”. And then I learned, and now,  I know:  don’t miss them this week at the Fairmount Theatre, where they headline a show also featuring G.O.O.D. Music signee HXLT.

I decided to delve further with this new opportunity , so I caught up with one fourth of Young Fathers, arguably the vocal trio’s lead, Alloysious Massaquoi (raised Scottish by way of “Liberia via Ghana,” according to Wikipedia.)

Speaking on the phone from the road on their way to Salt Lake City, Massaquoi, like a good Father, gave me something more to think about. Here is what he had to say about his band and where all that energy comes from.

Darcy MacDonald: So this is your second headlining North Amercian tour. Are the crowds a little bigger, a little more live?

Alloysious Massaquoi: Yeah, well, funny thing is, last year when we did our first tour in America, it was pretty busy, pretty sold out. The majority of them were sold out, and I think at the time we had an album just released and it added to a little bit of PR and stuff. But yeah, it was surprising. And the last few shows we’ve done have been pretty much sold out so yeah, it’s all positive.

DM: I got to see you guys play at the Osheaga festival last year and that was my introduction to you guys. I’ll tell you something honest. I would hear the name Young Fathers all the time. Now I love music but I’m largely a hip hop reporter. For some reason I assumed, they’ve gotta be an indie rock band from like, Akron, or something like that. (laughter)

So I’m kinda embarasing myself by saying that because I’d like to think I don’t typically judge a book by it’s cover. And that would be a huge mistake with a band like yours. There’s no way to label this sound, hip hop or indie or otherwise.

AM: Defintely, yeah, that’s true man. It’s a funny thing ’cause like, what we’ve on done the last album, White Men Are Black Men Too — it sounds like we’re a (full) band. Like the music sounds like we’re a band, somewhere between rap and indie stuff. It’s just weird that we have…how can I say, it’s a weird thing because we don’t go in thinking, like, ‘Oh, we’re gonna make a rap song,’ or ‘We’ve gotta go pop.’ It’s just, you know, ultimately we wanna make pop music but it’s just kinda all the influences of it all, from growin’ up, or from paintings, or wherever, really. It ends up being like how everything gets completed that’s musical.

We see a lot of people come together through a love of one particular genre, or one artist. They all love this person, they all wanna emulate a star. But, you know,  (Young Fathers) all like different stuff, and we come together and in the sense that we love pop music, we love melody, we don’t like to be in boxes and we’ve never been that type. We’ve just been really open about music. So it’s just like, you take what you take from different things and just mix it up. It’s actually kinda hard to talk about. We don’t think about it. You know? We just do it. We just go in, and we’re always just listening to stuff, and we all have that moment when we hear that sound where we all go, ‘Yeah, that’s the bet!’ One person said a word, or the sounds. Or, you know, just things like that, and we’re just pretty much open to just, that…you know, I feel like I’m ramblin’.

DM: No, it makes a lotta sense.

AM: It’s only during like sessions where we have to think about what to see, and what you’re talking about, but all in all, if you were in a session with us, if you were watching us in the studio, you would see that a lot of the way we perform, where it’s kind of spontaneous – everyone is kinda moving and we’re getting into the vibe — it’s kinda like a ritual kinda thing. It is what it is, that’s the best way to explain it. We’re not bothered to hip hop in general, or we’re not bothered to do pop music. We’re not bothered to any genre. It’s kinda like just bein’ magpies, takin’ this or takin’ that.

For me personally, I try and find something in every song I listen to, even if I don’t like the artist or the song, or whatever. I try and take away something. Whether it’s just the simplicity of his or her lyrics, or a little melody that comes up, or the arrangement – something! You’re just stacking up all these things that you’re listening to, conversations that you’re having, places that you’re going, situations…and I dunno how, but it ends up doing that, because sometimes, we make a song, and we’re just reacting, reacting to the circumstances that surround us. To whatever maybe you’ve eaten that day or I dunno, whatever. And you’re reacting to that.

And then it ends up where you’re saying a lotta stuff and you think, ‘What the fuck am I sayin’?’  You don’t know where it’s coming from. And then, you know, you let some out and you go, ‘Let’s not talk about it. Do it.’ You find where you’re going and that’s great. Then there’s other times where you’re telling it how it is, or story telling, or it’s fake — all of that serves the realm of creativity.

DM: That is an interesting idea, to be able to find something to appreciate in a work of art even if generally, we don’t love it.

AM: For me personally, I can’t remember lyrics of other people’s songs. It’s almost like I don’t want to. It kind of feels like if you don’t know it, it’s something you’ll always want to go back to, and maybe make you feel a bit better. I like (music) to be kind of mysterious in that respect. I don’t want to tame it. If I know how it works…I dunno, it’s a weird way of thinkin’. (laughter)

It just keeps it special. I like listening to melodies, I listen to the percusiveness of someone’s voice.

DM: So to flip it another way, can you recall any instance of your own band’s music being misundertood in any significant way?

AM: There are gonna be people who don’t like the music, and that’s fine. You can’t make certain things to please (other) people when ultimately we’re trying to please ourselves and push ourselves to make something that we haven’t heard before. On the one hand you can say that if someone doesn’t get it, they (won’t) like it because they don’t understand it or know where it’s coming from. But then if it’s pitched with our story or our background, it’s a lot easier for people to understand. At the same time I don’t think we should tell the story of how this came about, or where it came from. You know, people don’t have to give a fuck about it. They can either like it or not like it. And fans — I mean, we want as many people as possible to like our music. It’s nice, it’s great when people like, or love it. But even if they don’t, it’s known that this type of creativity exists and makes people aware that there are other ways to think about what music is. There’s other ideas. ■