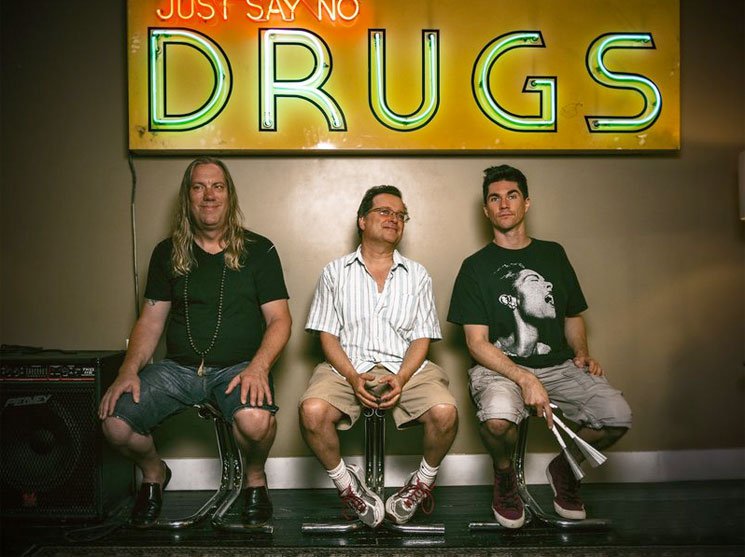 Violent Femmes have steadily performed on the festival circuit and headlined shows since their return in 2013. After a few stints on the road, they decided to have a go at writing and recording new material, resulting in their first album in over 15 years.

“We put out an EP less than a year ago that we felt really good about,” says the band’s bassist and cofounder Brian Ritchie. “The response to that was so positive, we decided to follow it up with a whole album.”

Recorded on the run while on tour with Barenaked Ladies and Colin Hay last summer, We Can Do Anything is a testament to the group’s playing. “The band’s been very tight. It’s always been a tight band, we were well-oiled,” Ritchie explains, “so we went back to a number of different studios. It was recorded in Brooklyn, Nashville, Milwaukee, L.A. and Denver.”

The album has a unique cohesive feel that Ritchie attributes to the group’s recording philosophy “which has to do most of it live, set up in a room together without any baffling or isolation booths and no opportunity to overdub our parts,” he says. “It was just a matter of getting good live takes. That’s what we excel at.”

Anyone who has witnessed Violent Femmes in concert can attest to the power of their energetic live performances. Their set lists are designed for a continuous sonic assault, “with a live show you have the ability to create crazy excitement playing songs people are familiar with.” Having said that the band takes a different approach when sequencing an LP, “on an album theoretically people are not familiar with anything so you have to be even more careful because you have to please them. We tried a few different orders, it’s a matter of trial and error. We’d do a test order and just listen to it and see what flowed the best.”

We Can Do Anything captures the essence of Violent Femmes’ trademark sound while also expanding it with the help of new collaborators including Barenaked Ladies’ Kevin Hearn. “We were on tour with them, that’s why he is on a lot of the record. We were playing with him quite a bit and hanging out,” explains Ritchie. “We said: hey come in to the studio with us. He added a lot of fantastic ideas to the recording and also did the album cover so it was a good feeling you know just a bunch of guys having fun together.”

Longtime fans will enjoy the triple-threat of “Issues,” “Holy Ghost” and “What You Really Mean,” the latter written by folk singer Cynthia Gayneau (frontman Gordon Gano’s sister). The 10-song LP also features vintage song ideas from the trio’s vault, “every time we’ve made an album it’s been a mixture of new material and old material,” says Ritchie, “even the first album some of that stuff was written before the band started so it’s nothing unusual that we would mix it up like that.”

Violent Femmes will embark on an extensive tour beginning in Australia this month. The band have fond memories of the road. “There was a lot of good live music happening like 20-30 years ago when we started,” says Ritchie. “But the music scene is still very strong and there’s as much good music being made today as ever so I’m just happy that we can still fit in.” ■

Violent Femmes’ We Can Do Anything is available now via Pias/Sony.