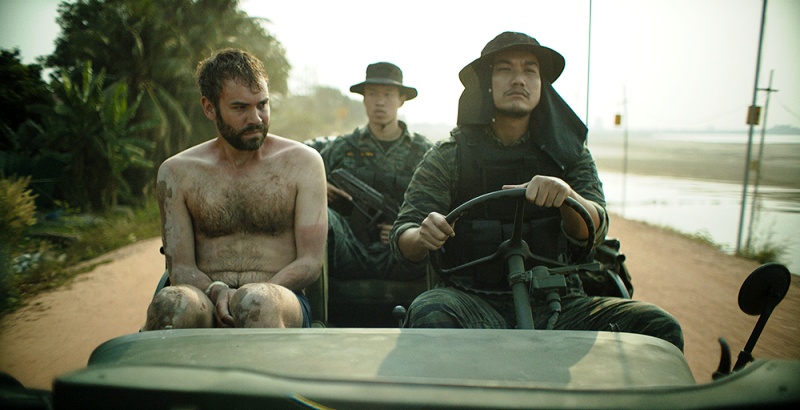 It’s only five days into the Toronto International Film Festival when I return to the hotel suite that Elevation Pictures is using to hold their junkets, but a lot has changed. Thousands of journalists, film crews, filmmakers, actors, publicists and other hobnobbers have passed through here in the last five days, and what originally buzzed with activity now feels like the town square five minutes after high noon.

I’m here to meet Jamie M. Dagg and (a very tired — he’s in no less than three films making their world premiere at TIFF) Rossif Sutherland, respectively writer-director and star of the new film River. Sutherland plays as an American doctor named John Lake who works as a volunteer in Laos. After a particularly drunken evening at a bar, Lake stumbles home to find two tourists raping a local woman. He fends them off and blacks out, only to wake up the next morning to discover that the rapist’s body is being pulled from the river. Unable to recall the events of the evening but certain that he’s the culprit, Lake must find a way to escape the authorities and make his way out of Laos into relative safety.

River is a pared-down thriller in the mode of Blue Ruin or Cop Car, taking the distinctly anti-Hitchcockian position of never calling into question the fact that the main character is very much guilty of what he’s accused of doing.

“That was the more interesting way to go,” says Sutherland.

“There was a point in the script where the guy’s head smashes on a rock and it’s the rock that ends up killing him. We wanted him to take full responsibility. It’s about a good person seeing red, and becoming a killer. From that moment, what does his life become? Who is he? Is he what he’s done, or is he the person he was growing up? He’s all these things.”

Filming on a low budget in a country that doesn’t have much of a film industry, Dagg and his crew found themselves in brand new territory. “It took us a number of months to secure permission from the government. Our local producers acted as our conduit to the multi-headed dragon that runs the state,” laughs Dagg. “It was very much run-and-gun. We had to move incredibly quickly. Having said that, we had two cameras going almost the entire time.”

“It was an environment in which you didn’t have to ask permission to shoot somebody who was just somebody on the street — not an extra,” adds Sutherland. “Not that we were doing things against their wishes — they didn’t seem to mind once they figured out what was happening — but they were incredibly indifferent as to what was going on. (…) It’s a bunch of adults that seem to be playing this absurd game of chasing an actor with a camera.

“It was an extraordinary place to shoot because we were all out of our element, telling a story about a guy who ends up completely out of his element. Not just because of geography, but because of what he’s done. We all got on this ride together with the design of making a good film. It’s one thing to talk about that stuff back home and dream and say you’ll do this and do that, but it was a learning experience for all of us.

“It became very much about making the most of every single day and finishing our days. It was about managing change constantly and not trying to just stay stuck on that idea that was so perfect in your head and instead just embracing the constant changing environment around you, and it’s made the film what it is.”

Sutherland looks at Dagg, who appears lost in thought. “Oh, no, I’m just listening to what you’re saying and recounting to myself… not trauma, exactly… but…” he laughs.

“Oh, no, it was traumatic for a lot of people, including myself!” Sutherland says. “The heat, the anxiety, the stress…”

I add that this seems particularly appropriate in Sutherland’s case; as the true lead of this film, he’s on-screen for nearly every moment of it. “Oh, you could’ve turned the camera on any crew member and seen the same thing. It was one of those strange films, and I may never get an opportunity to do something like this again. It was a challenge, it was a dare.” ■