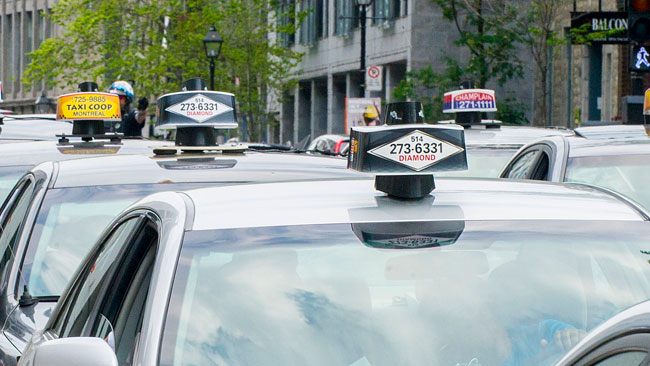 Uber sells itself as a brash pioneer in the so-called sharing economy, providing a cheap and efficient cab service through the use of a brilliant app it developed, which is really neat (if you’re not a taxi driver).

But while Uber’s technology is cutting edge, its centuries-old business philosophy of laissez-faire capitalism has resulted in “surge pricing” — this past New Year’s Eve, a Laval resident who accepted the higher fare was charged $600 — and complaints from its own drivers in other markets about earning a decent living.

Even scarier, Uber doesn’t play nice. Like robber barons of old, Uber has become an intimidating financial juggernaut valued at more than $60-billion (rivaling GM, Ford and Honda, according to Forbes) running roughshod over legal and democratic institutions, bullying not just taxi drivers, but all opponents including politicians.

And while it portrays itself as a consumer saviour, breaking the rules to break local taxi monopolies, Uber seems intent on becoming one huge global taxi monopoly answerable to no one but its price-gouging algorithms and profit-hungry investors.

The stakes are higher than cheap cab rides. If the highly-touted Uber business model spreads, the economy could become a wasteland of poorly paid, disenfranchised contract workers devoid of the most basic rights and protections with no one to turn to, including governments running for cover from aggressive lobbying by Uber-like giants with bottomless pockets.

But if the government, the last sole arbiter of the public good, doesn’t stand up to aggressive giants, who will?

Those are the stakes currently being played out at public hearings on the future of taxi industry at the National Assembly.

How Uber does it

First, a little transparency on my part: I used to be a taxi driver; family and friends are taxi drivers and owners. I have been religiously renewing my taxi licence (known as a pocket number), for more than 35 years. While I highly respect taxi drivers (it’s a hard honest living), I don’t speak for the taxi industry and have always resented some of the governmental regulations I’m about to defend.

Here are some of those taxi rules. To own a taxi, you need a government taxi permit that now costs roughly $160,000, down from a pre-Uber high of about $220,000 — those numbers vary depending on who you talk to. To drive a Montreal taxi, you must take a 150-hour course costing $1,200 in order to obtain a taxi licence (pocket number). Every two years, you must renew it for $117, pass a criminal check for $105 and take two six-hour courses costing $50. If you own a taxi, you need a meter, a dome, a car that is inspected every six months and expensive insurance. By law, you must charge the price on the meter. You are not allowed to discount or increase the fare. You must do a pre-trip inspection of your car. The newest rules obliges drivers to wear black pants, a white shirt and open the door for customers. And Bureau de Taxi inspectors enforce those rules.

Here are the known requirements for Uber X: you need a car and a smart phone.

When Uber first came to Montreal, they played by the rules. They recruited licensed taxi drivers to provide their service until they received a loyal following of customers. While they still offer the legal taxi service, Uber then decided to blatantly break the law by offering its cut-rate Uber X service, provided by people using private vehicles.

Uber calls this black market taxi service “ride sharing.” I have non-cabbie friends who love Uber and I am envious of the technology they use, probably the best taxi dispatch system in the world. And I also think the taxi industry needed a good kick in the ass, which the legal Uber service provided.

But how can a taxi driver, either paying off a loan on his permit or renting a taxi at more than $500 a week, forbidden to discount or increase fares, handcuffed by governmental rules, possibly compete with a black market service by a company brazenly breaking the law and having the chutzpah to say the law should be changed?

Uber’s organized bullying has resulted in politicians world-wide (some reluctantly) throwing law-abiding taxi drivers under the wheels of the runaway rule-breaking Uber bus.

Washington Post journalist Rosalind S. Helderman writes: “Uber’s approach is brash and, so far, highly effective: It launches in local markets regardless of existing laws or regulations. It aims to build a large customer base as quickly as possible. When challenged, Uber rallies its users to pressure government officials while unleashing its well-connected lobbyists to influence lawmakers.”

Those loyal customers Uber recruited with the help of legal taxis can be mobilized at the press of a button. According to Gazette reporter Caroline Plante, Uber Quebec general manager Jean-Nicolas Guillemette bragged at the public hearings that “8,000 drivers gave 450,000 rides to Quebecers in recent months.” That equals a lot of Uber supporters.

In the United States, Uber has spent millions on its campaigns and hired lobbyists in all 50 states.

In Portland, Oregon, city council passed a so-called ride-sharing law by a 3-2 vote last year, but the experience left a sour taste for politicians.

Commissioner Steve Novick voted in favour of the bylaw. Journalist Joseph Rose of The Oregonian wrote: “I don’t like Uber,” Novick said, noting that one of the company’s executives recently advocated hiring investigators to dig up dirt on journalists who scrutinize the company. “But we’re not voting today on whether we like Uber. We’re voting on whether we’re going to allow a different business model to operate.”

Montreal Mayor Denis Coderre has been unequivocal, saying Uber is illegal and declaring at the Quebec hearings that taxi owners should be compensated if the government decides to deregulate the industry.

Quebec government has given mixed signals regarding Uber, implying the service is here to stay but must operate within a legal framework. According to The Gazette, Transport Minister Jacques Daoust ordered the company to stop its illegal activities and open its books to Revenue Quebec at the recent public hearings. Uber refused.

What should the government do?

It should level the playing field to ensure fair competition, applying the same rules for all. Either force Uber to use legal taxis or if the government wants to deregulate the industry, than it must buy back taxi permits at pre-Uber prices. Uber should  pay for the permit buy-back as a penalty for months of law-breaking.  The government should also compensate all taxi drivers for lost revenue due to unfair competition by a law breaker. Meanwhile, everyone must pays taxes, have adequate insurance, and have their vehicles subjected to same mechanical inspections every six months.  The rate system should be the same for all too. If Uber can vary it fares, so should taxis.

The government should protect consumers by outlawing price gouging. When users need a taxi most, during a storm, crisis (in some U.S. states Uber reportedly has a price surge cap during a crisis) or even Christmas, it is immoral to increase fares by 300 to 800 per cent.  Those increases are exaggerated under any supply and demand circumstance. Should supermarkets increase the price of goods during storms?

The government should also ensure that all taxi drivers, including Uber drivers, are treated fairly and protected under labour laws. In other markets, Uber drivers have been reportedly “deactivated” when they protested Uber rate drops. Also in other markets, reports indicate Uber’s financial partners leased cars to drivers who found themselves saddled with debt and trapped with payments they could hardly meet.

Why I am concerned with the plight of Uber drivers?  Because, despite the semantics, they are taxi drivers and I know how hard it is to make a living as a cabbie, working long, sometimes dangerous hours for a meagre return.  I remember how hard my father worked, and the expense and effort it took to keep his cab going. But he was owing to no one.

Uber drivers are owing to Uber. And Uber is unapologetically driven by profit, with no moral sense of responsibility to its drivers or the communities it serves. Consumers benefit now, but let those 800 per cent price surges be a warning. Should Uber replace the legions of small taxi-monopolies with a global monopoly of its own, how high will computer generated prices rise then?

(In all fairness to Uber, it faces competition of its own from other so-called “ride sharing” companies, like Lyft, offering free rides to new clients and for referrals. They also compete for drivers. But Lyft’s reported estimated valuation of $4-billion pales to Uber’s $60-billion plus.  And Lyft operates mostly  in North America versus Uber’s global presence. )

According to Forbes magazine, “It only took Uber five and a half years to surpass the valuation of 107-year-old General Motors.” At that rate, in a few years it will rival Quebec’s annual $100-billion budget.

That growth, combined that with Uber’s blatant disrespect for local laws and politicians makes it one scary giant on the road to global market domination in my books. Someone must stand up to them, before it’s too late.

According to The Gazette, Quebec Transport Minister Jacques Daoust told an Uber representative at the public hearings in the National Assembly: “You’re in the house where we make laws and what you’re saying is: ‘Until I like the laws I won’t respect them,’ and for me, sir, that’s unacceptable. We will be the ones to impose a model on you.”

Maybe someone just did.

The Journal de Montréal reported that Daoust is expected to table legislation regarding the taxis issue at the end of the month and a vote is expected in June. ■

Charles Abramovici is a Montreal playwright and freelance writer.