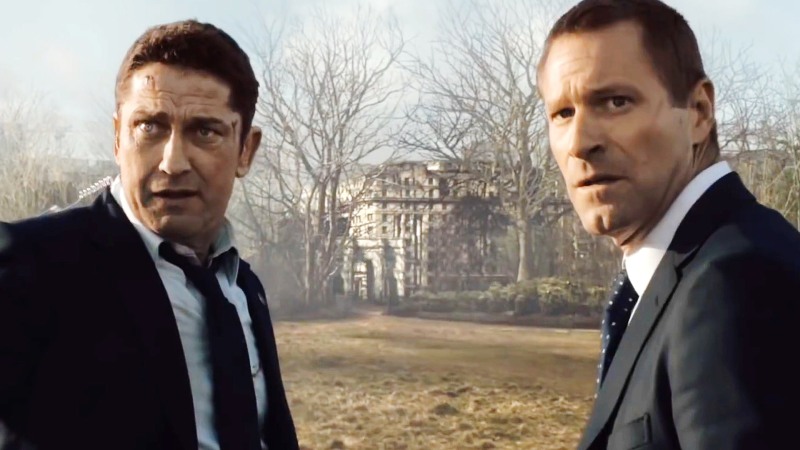 Gerard Butler and Aaron Eckhart in London Has Fallen

In the interest of full transparency, let me be honest here: I watched London Has Fallen having not seen its predecessor, Olympus Has Fallen. Usually, I would not walk so brazenly into a sequel without the necessary preparations, but there are a few factors that aided in my decision:

1. I did see White House Down, possibly the last great boneheaded action movie of the decade, and seeing Olympus Has Fallen (which has the exact same premise but was originally released first) would only serve to temper my love of Roland Emmerich’s masterstroke:

2. The original Olympus Has Fallen is a full two hours long, which is roughly 20 minutes more than I’m willing to give any movie starring Gerard Butler as a purely leisure-based viewing option;

3. I’m pretty sure I can deduce everything that happened in Olympus Has Fallen using context clues and a side-by-side comparison of both films’ casts.

The concept is there in the title: Olympus (the USA, of course) fell the first time around, now London is falling. Aaron Eckhart, Gerard Butler and the combined power of their chins are there to make sure that this is a temporary state for them to be in. As it turns out, even this minimal state of preparedness is way more than is necessary to understand the downright embarrassing London Has Fallen.

Badass president Benjamin Asher (Aaron Eckhart) and his even-more-badass Secret Service man bff Mike (Gerard Butler) have to travel to London to attend the funeral of the British Prime Minister, who has died in his sleep in completely normal and in no way suspect circumstances. Mike doesn’t really want to travel; his wife (Radha Mitchell) is expecting a baby, and he’s promised himself that despite his love for his country and for machine-gunning bad guys with his best friend, he’s going to hang it all up.

It’s with the vague promise of “one last job” that Asher and Mike find themselves in the middle of an orchestrated series of terrorist attacks that kill a handful of world leaders and paralyzes London entirely. Amir Barkawi (Alon Moni Aboutboul), a terrorist mastermind of vague ethnic and religious background, has masterminded this whole thing from the inside as payback for a drone strike that resulted in some tragic deaths. Asher and Mike have to fight their way out of London into safety before the president is captured by the terrorists and executed “live on the Internet” for everyone to see. 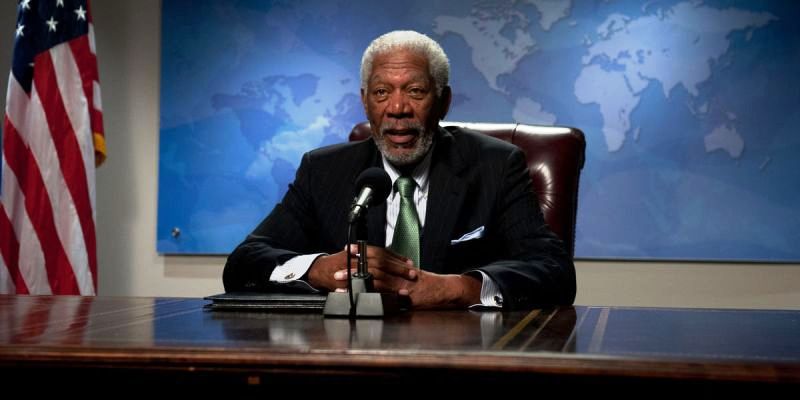 Morgan Freeman in London Has Fallen

Despite having a budget of $105-million and getting a wide release in damn near every multiplex in North America, London Has Fallen feels cheap. It feels like any number of tired, defeated Jean-Claude van Damme or Steven Seagal vehicles haphazardly assembled on a soundstage in Romania or Bulgaria (perhaps not coincidentally where parts of London Has Fallen were shot) and crapped onto video store shelves in the early 2000s.

Dimly shot and mostly visually incomprehensible, it quickly moves past its disaster movie opening to become two aging A-list action stars stalking around in slate-grey tunnels and saying things like “You should’ve stayed in Fuckheadistan” while a gallery of overqualified character actors (Melissa Leo, Jackie Earle Haley, Robert Forster and the ever-present Morgan Freeman) sit around the war room looking consterned. More than anything, London Has Fallen seems like a film no one ever thought they’d have to be in: an improbable sequel to a slightly embarrassing cash-grab that has turned into a regrettable obligation.

Director Babak Najafi (who presumably landed the gig based on his work in the popular Swedish Snabba Cash film series starring Joel Kinnaman) brings little visual panache and a very limited sense of control to the proceedings. While most dumb action movies are, at some level, an excuse for directors to blow up their toys, London Has Fallen feels even more pointlessly chaotic. Shit explodes all the time, but the effects are terrible; action scenes seem to have been conceived with a specific concept in mind but ultimately willed into being from three or four establishing shots and an insert of a machine gun. It’s a lazy, boring, confusing and generally worthless 100-minute slog, but I can’t say that anyone is really going to stand up for it. Everyone seems to know that they have no choice in the matter — it’s the shovelling-the-walk of action movies. ■

London Has Fallen opens in theatres on Friday, March 4. Watch the trailer here: