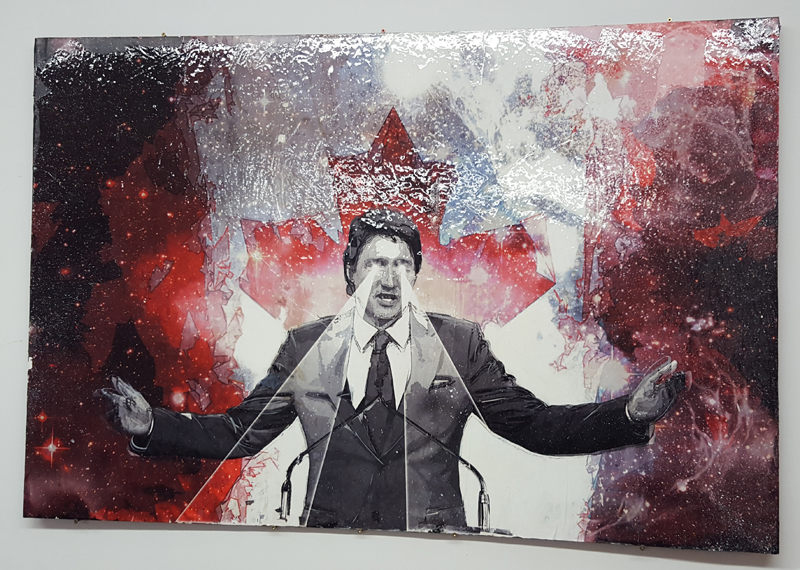 With an over-abundance of beautifully generic women and cute animals flooding the mural/gallery circuit nowadays, it’s refreshing when an artist steps away from the basic mass appeal. Going through Canada’s recent transition of Trudeau and the Liberal party, along with the current state of U.S. politics, we sat down with Futur Lasor Now for a quick Q&A about his politically themed show Futur Politics Now on display at Fresh Paint Gallery until March 27. 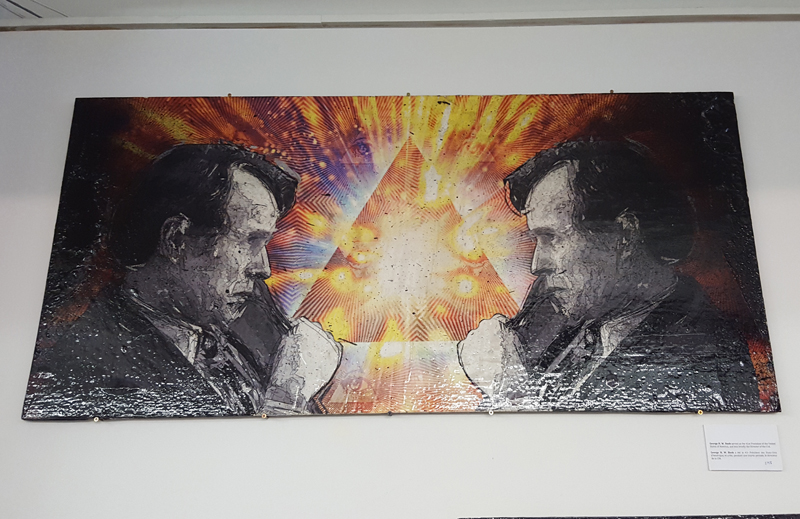 TurtleCaps: This is your most insightful body of work thus far. What was the inspiration behind it and the message you’re trying to convey with this collection?

Futur Lasor Now: Futur Politics Now is a collective body of work that’s an extension of my street art into the gallery. I wanted to use this opportunity to its fullest potential and shed light on the numerous characters that make up the political world that we live in, as well as a nod to ones of the past. This show does not have a specific, overall message; it’s more of a reflection of the times we are living through, which in my opinion are extremely intriguing and important. Not only important in the political world, but also in the broader spectrum of the world as a whole. So many things are happening, especially in the technology world, and the laws being created to govern these advances are being put into place by political entities. Eventually these policies affect everyday people and slowly control the direction of where we advance to next.

TC: In the 1950s, the American art movement flourished with exceedingly publicized associative references to Cold War politics. Would you say your pieces are an expression of the tumultuous times facing Canadian politics?

FLN: These pieces reflect on the past and present. The clear option is for the public to make decisions based on this knowledge and try to create a better future. I chose to portray these specific players from the political world to inform people. I tried to be as ambiguous and unbiased in how I presented them, although I found that difficult, as my own political beliefs leaked through. Hopefully people will form their own opinions and by putting these pieces out to the world, maybe it sparks debate, discussion or at least curiosity, which is the exact thing I am trying to do.

TC: Outside of this particular show, does the social and political climate in North America impact your overall artistic expression?

FLN: I was very apathetic for many years, but once I started to follow current events and news, I could not close my eyes to the world that I was seeing. It made me realize that I had no control over what was happening all around me. It’s an overwhelming and stressful feeling. It’s probably a big reason why a lot of people don’t follow the news or read about the “ACTUAL WORLD” we live in. For me as an artist, but mostly as a human residing on planet earth, I made these art pieces as my contribution—to do my part in an effort to create change or in a way, take control.

TC: With the circus sideshow that’s currently developing in the U.S. presidential race, what’s your stance on U.S. politics?

FLN: I follow American politics and find it fascinating. Even though I’m Canadian, I know we’re affected by what happens to the south of us and we should pay attention. The events happening right now are especially intriguing so I made a few pieces for the show that are about the current election race in the states. The options available to Americans in their political system are really unbelievable but yet, there they are. Not to say our Canadian system is better or worse, I just think it’s important to know about it. Especially when one of the front runners is a character like Trump. We all need to be observant and not just ignore the things we don’t like to see, or else the future could be something out of a Hollywood disaster movie.

TC: What’s up next for Futur Lasor Now?

FLN: I am currently working on a batch of new pieces for the Spring that I will display in my favorite gallery: The streets of Montreal. ■