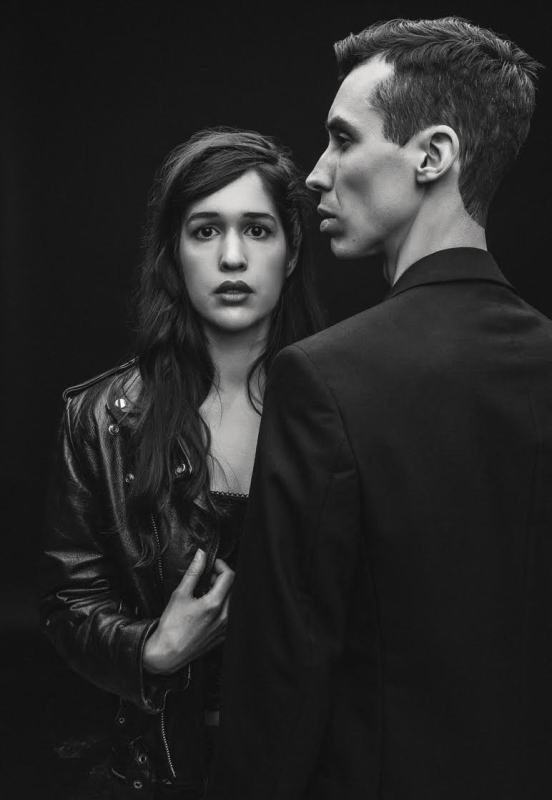 After being courted by the label for over a year, Essaie Pas announced in January that they’d been signed to New York City’s DFA Records, co-founded by James Murphy (LCD Soundsystem) and home to dozens of progressive electronic acts. Marie Davidson and Pierre Guerineau began releasing music independently or on small labels in 2011, working at now-shuttered Mile End show space and studio la Brique, where they first met a decade ago.

“At first we were just acquaintances, then friends. We started making music in 2009, and after a while we ended up having a love story,” says Davidson. “There was more than just a musical connection,” adds Guerineau. The couple was married in 2013, and like their personal relationship, that musical connection took a while to fall into place.

“There was maybe two years of experimentation,” Guerineau explains. “The band changed — at one point we were three, and we changed our name. We were finding our style, trying different instrumentation. I was playing drums, Marie was playing guitar, flute, whatever, doing some crazy jams. It was a bit all over the place.

“I guess the way we got into more electronic music was because I was a really bad drummer — I’m better at guitar. But we needed a rhythm section so we started using Marie’s drum machine, and Marie was already playing synth with les Momies de Palerme,” Guerineau says, referring to Davidson’s other duo project with Xarah Dion, which is now defunct. (Davidson also has a lively solo project — she’s releasing a new album this month. Guerineau is working towards a solo project of his own, as well as producing records for artists, Davidson included.)

The earlier incarnation of Essaie Pas was blues-rock with an electronic streak (imagine a more experimental version of the Kills), but Guerineau eventually traded his guitar for a synth, Davidson got into sequencers and the duo introduced Ableton software into the hardware mix. The final stage of Essaie Pas’s sonic transition to the deep, dancey, retro-Euro synthscapes of Demain est une autre nuit was the change of studio in 2014 from la Brique to a nearby office space occupied by day by les Filles Electriques, the production company behind the multidisciplinary Phenomena Festival.

“They offered to rent the space to us really cheap, and since they work during business hours, we have nights and weekends,” Davidson says. “The song that gave the direction for the new record was ‘Retox,’” Guerineau says. “It was the first track recorded in this new place, and the sound of the sequences, the more dance-oriented beats and the nocturnal theme of the song — it’s about nighttime and obsessions and disorientation, because we were travelling a lot and didn’t have a stable place. We were touring and clubbing and walking at night with our music — it was a special space and time that gave a real identity to this record.”

Before embarking on a tour that will cover a lot of new ground — Essaie Pas have toured Europe, but only played two North American shows outside of Montreal (Toronto and NYC)— they’ll be launching their record at their biggest hometown show to date, at la Sala Rossa.

“The launch will be a really great night,” Guerineau says. “We’re super-excited.” Opening act GRKZGL is a personal friend, and the other opener, Hamilton duo Orphx, are longtime heroes for Essaie Pas — Davidson calls them “one of the best live acts I’ve seen in my life.”

Sounds like something worth getting in early for, and getting in can’t be more highly recommended. Essaie Pas is a powerful force on stage, too, and given their projected ascent worldwide as well as here at home (their next local gig is at the prestigious Mutek festival in June), seeing such an exciting Montreal act as they lift-off should be a priority for all fans of dark dance music. ■