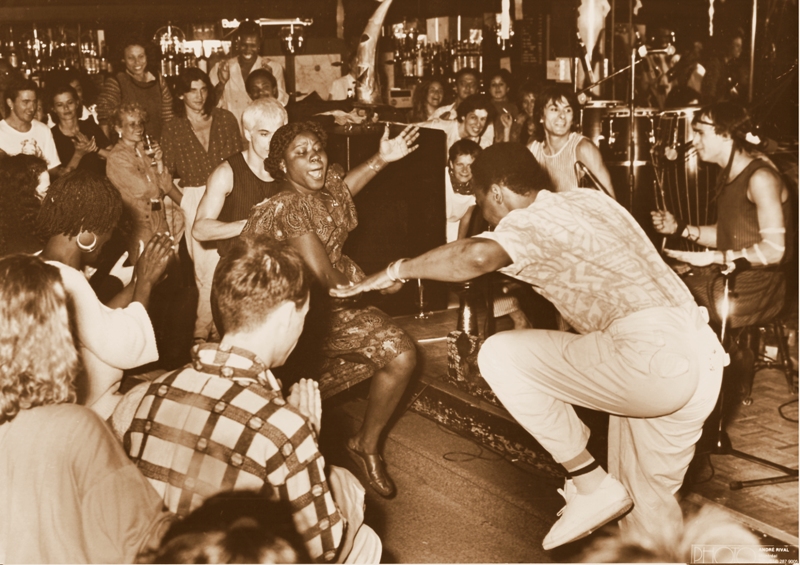 For three decades, Club Balattou on St-Laurent Boulevard has been a lively party spot, a showbar repping the varied sounds of Africa and a first stage for local acts making all permutation of Afro-centric sounds, from traditional music to pop, rock and electronic hybrids.

When Balattou opened its doors on Aug. 8, 1985, the terms “world music” and “world beat” hadn’t yet been coined, and African music had very niche appeal, almost exclusively within cultural communities. It was the club and the festival that sprang from it two years later — Festival Nuits d’Afrique — that popularized African music in this city and created an internationally recognized local market for the music and the artists who make it. The venue also fostered a loyal clientele of Quebecers and ex-pats alike, creating an appreciation of African styles that would have a significant impact on Montreal’s music scene and the festival landscape — Nuits d’Afrique is now a two-week summertime event with a large outdoor component in the Quartier des Spectacles.

“At the beginning, the local [world music] scene was small but we were open seven nights and we managed to book artists regularly, including international names,” says Balattou and director co-founder Suzanne Rousseau.

“I was so impressed by the variety of people, and that — from the beginning — it was full on the weekends. It was a special team that was there: the DJ, the doorman and the experience of Mr. Touré, which I understood years later was why it was a success from the start.”

Balattou/Nuits d’Afrique founder Lamine Touré moved to Montreal from Guinea, in West Africa, in 1974. He organized events in the city for years prior to opening his own space, notably at the Café Creole, which closed in the early ’80s, creating a vacuum that needed to be filled. With a background as a dancer in Guinea’s Ballet National, Touré has always had an affinity for artists and their work, which helped him to connect with musicians locally and internationally. But he’s also known among musicians for pulling no punches as a critic.

“The artists, after the show, he tells them what was good and what wasn’t good,” says Rousseau with a chuckle. “He’s there to really give them some good advice, some constructive criticism.”

Touré — who also operated Kola Note on Parc for a decade, between the venue’s incarnations as Club Soda and Cabaret du Mile End — is revered in this city and beyond for his kindness and generosity; anyone who’s been to Balattou has probably shaken his hand, as he receives clientele nightly to this day. But he’s also opened the club’s doors as a welcome centre of sorts, providing guidance for countless African immigrants and refugees.

“I remember the years where there was significant migration from Africa,” Rousseau recalls. “One year you felt the Ethiopian migration, one year Somalian, one year Ghana, the Congo, Mali — whenever there was a crisis, you felt the migration coming through Balattou.

“Sometimes we were the first people to welcome them and show them how it’s done here, and provide a place where they wouldn’t feel lost in the city. Sometimes taxi drivers would bring people who just arrived at [the airport] to Balattou, bring them straight to Mr. Touré and he would help them — give them money for one night in a hotel and tell them where to go the next day, the Y or places like that. This would help them find their way in a new country. So this kind of interaction makes Balattou very rich, not just musically but culturally and socially.”

To celebrate Club Balattou’s 30th anniversary, three nights of events representing three generations and myriad permutations of world music have been planned, beginning this week. As usual, everyone is invited — “bal à tous” roughly translates to “party for all.”

“During festivals and parties, it’s the tambourine that traditionally announces a celebration in the African villages,” Rousseau explains. “Professional tambourine players make their instrument talk, it’s like ‘Come, we’re having a party on Saturday night!’ People understand the announcement, so we found that to be a good way to start the celebration. It’s a call to action, and to a diverse range of artists.”

“Jab Jab started at Balattou, they’re from Grenada, they play soca, reggae and calypso — they were Lorraine Klassen’s band. They’re so sweet and so professional and open to playing different kinds of music. They will be accompanying different generations of artists; they’re rehearsing all the songs now.

“Rookie Rook is French reggae; Élété from Chad is one of the brothers from K’Lana; Kali from Kali & Dub is from the older generation in Montreal. From the new generation, there’s Veeby, she does R&B and soul, African style; and Takeyce-Ti; she’s a new artist from England, originally from Jamaica, and she’s got talent. She sang regularly with Kalmunity.”

This event doubles as the launch the 24th edition of the Festival de Musique du Maghreb.

“North African artists who came to Montreal also have a special place at Balattou because it was often the first place they played on a professional stage — they would play mostly in restaurants. So this night is to celebrate them, to pay homage to Nazir Bouchareb [the late Moroccan gnawa musician] and to open an event that began at Balattou.” ■

Club Balattou is located at 4372 St-Laurent. For more information and programming details, see the venue’s website.

For more information about the Maghreb music festival and Nuits d’Afrique, click here.