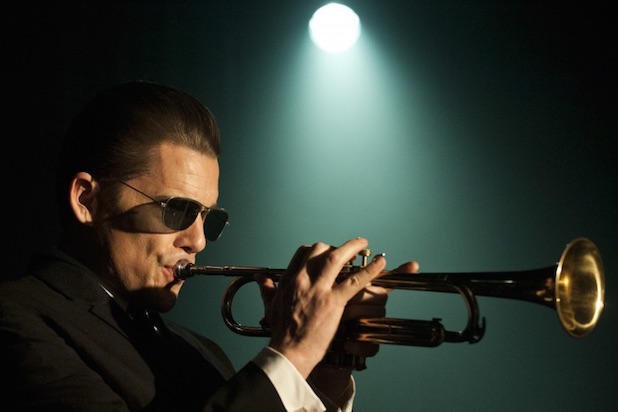 Ethan Hawke in Born to Be Blue

Chet Baker occupies a very particular space in the cultural landscape. Unlike other junkie icons like Cobain or Morrison, he lived well into his 50s and burned out quietly. Unlike other jazz superstars of the era like Miles Davis or John Coltrane, his music (basically straightforward, sometimes vocal takes on standards) has not necessarily been accepted as part of the canon.

The fact that Chet Baker is still cool in 2016 has little to do with his covers of Cole Porter songs and a lot to do with his good looks. His image may be iconic, but his work, less so. The risk with making a film about him is that his life hits none of the standard points of the musician biopic but all of the junkie ones, and we’ve seen more than enough soulful heroin addicts on screen. The actual period of Baker’s life depicted in Robert Budreau’s Born to Be Blue did result in a comeback and Baker did have to re-learn to play the trumpet after getting his ass kicked, but the most sensible thing it does in telling Baker’s story is avoiding telling the real thing.

When we first meet Chet Baker (Ethan Hawke), he’s going through withdrawal on an Italian jail floor, imagining a spider crawling out of his trumpet. No longer the baby-faced prodigal son of the West Coast cool jazz scene, Baker is a two-bit junkie in and out of exotic jail cells across the world. Miraculously, he’s bailed from jail by an American movie director who wants Baker to star in his own biopic alongside Jane (Carmen Ejogo), the spitting image of his ex-wife. Trying desperately to stay clean and avoid more jail time, Baker begins courting Jane only to have his face smashed in by some dealers he’s in too deep with. Eventually fitted with some new dentures that completely retool his embouchure and force him to painfully work through a whole new method of playing the trumpet, Baker tries desperately to get his career moving again with the help of Jane, whose own career as an actress has stalled since the cancellation of the Baker project.

Born to Be Blue unfolds not as a series of musician plateaus (there is no montage of Baker accidentally and effortlessly writing a classic song, no visual crawl up the Billboard charts) but as a fairly intimate portrait of a recovering addict who happens to be Chet Baker. It’s less a film about genius and more about the precarious balance that has to be established in order to give someone the tools to access their genius.

The fudging and omission of certain aspects of Baker’s life is a gamble by Budreau that could very well not have paid off. Fictionalized biopics of musicians have been made before, and too often they feel like a simple cop-out owing to rights issues and sensationalistic tabloid urges. I’ll be willing to admit that Born to Be Blue’s gambles paid off with me to the extent that I don’t really have that much knowledge about Baker, but nevertheless it allows Budreau to explore more than just the point form of the man’s life.

Hawke plays Baker more vulnerable and needy than you could imagine; even his bouts of Hawke-esque cockiness crumble under the weight of the disappointment he has foisted upon the world since the beginning of his career. This is the jazz musician as a high school sports star who peaked early but stuck around to see exactly to what extent the world is disappointed in him.

The figures of Miles Davis and Dizzy Gillespie loom large in his world, a constant reminder of what he isn’t — and who he needs to rely on if he can’t trust himself to get a leg up. The role of the supportive partner who stands by the tortured genius is an unenviable one for most actresses, but Ejogo manages to transcend the role’s more pragmatic angles. No one thinks Jane is a saviour except for Chet; no one expects Jane to have the answer to everything, least of all Jane herself.

Born to Be Blue certainly isn’t perfect. For all of its ducking of clichés, it wallows in them shamelessly during a sequence where Chet visits his folks’ farm in Oklahoma. Stephen McHattie portrays his disapproving father with such a heaping serving of wrong-kid-died that it threatens to send the whole thing into a tailspin. Nevertheless, Budreau makes a strong case for artist biopics to focus on the artist rather than the art — it’s the biopic as a character sketch rather than a biographical rundown… which is really what it should’ve been all along, don’t you think? ■