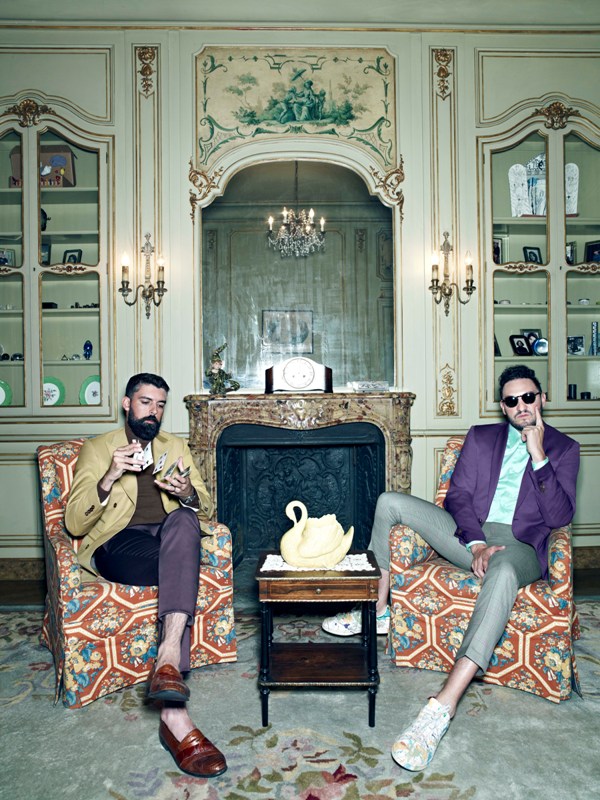 This week Canadian hip hop/electro duo Radio Radio are set to release Light the Sky, their first album written entirely in English, rather than the Acadian Chiac rap they’ve become known for. On this fifth record, Gabriel Malenfant and Jacques Doucet worked with DJ Champion, Alex McMahon, Shash’U and J.u.D to create a set of catchy tracks that are also thought-provoking.

Ahead of their album launch next week, we chatted with Malenfant about language, schtick and multi-layered lyrics.

Franca Mignacca: What inspired the album’s title, Light the Sky?

Gabriel Malenfant: Usually we don’t really figure out a title beforehand. It comes at the end of the process when we have a theme that encapsulates it all; we have a driving idea but not necessarily an album title. For this one basically, it was out of all the songs, this one stuck out. It’s very open to interpretation, pretty poetic and life is kind of like that sometimes — you don’t find it, it finds you and the more we talk about it, think about it or ask questions about it, then the more it makes sense.

On a different level, light is anything that we create, or that emanates from us or from outside. It can be our art, it can be perceived as something positive or negative, and it could be bombs, it could be fireworks or something that we create in the sky, just like the canvas where we project whatever we’re doing, whether it’s your life, your work, your relationship or whatever. I think it’s just the encapsulating theme that we’re participating in the creation of life as we know it.

FM: Why did you choose to make an album entirely in English?

GM: Well, I’m from Moncton and Jacques is from Nova Scotia, it’s all surrounded by English people. He’s dated English girls, I’ve lived, worked, laughed with English people. Moncton is the only officially bilingual city in Canada, in the only officially bilingual province in Canada, so it’s super bilingual, super coexisting and so it’s just a natural thing. Something was buzzing inside. We were raised on and loved English and American culture, music and hip hop, and so that was just the buzzing need to do it.

Also within that, it was just the challenge of mixing it up and not being pigeonholed as an Acadian novelty. You know, getting rid of all that, “Oh, these guys work cause they have their shtick, they have their Acadian shtick,” so we wanted that variable to be kind of annulled so that we could be judged on a different scale. For us, I know it’s not that but for people who thought it was that, [it’s] kind of a bonus. And last but not least, just wanting to share what we do, what we believe in, to more people and spread the love on a different scale. I think it’s like you’re a chef that just cooks gluten-free recipes and eventually you want to use flour and stuff, and just do it, ’cause then your doors can open up to a great amount of characters, people, ideas and exchanges.

FM: Do you feel this album has a theme?

FM: Why did you choose to write a song about (home improvement TV personality) Mike Holmes?

GM: I’m a big fan of HGTV, of Russell Brand questioning politics and spirituality, and Russell Simmons. My grandparents always had the radio on in the background when I went there [as a kid], and for me it’s HGTV. So [the song] pokes fun, but at the same time pays homage to the channel and to the fact that it’s part of our lives. Just in Montreal in the past eight years, I’ve probably stayed in about 10 apartments. Now, instead of moving every six months, we’re more settled. And radio has been good to raise cultural totem poles and symbols that are part of our life, like deck shoes [in “Dekshoo”]. And once you have a symbol in front of you, you can reflect upon it, you can laugh at it, you can laugh at yourself and you can question it. It’s just there. Same thing with “Jacuzzi” — it’s a party song, but if you look into it there’s many layers to peel off. It’s also questioning consumption, and who are our new super heroes. The idea is to take things that are more serious with a grain of salt. So, that’s kind of our shtick. That’s how we navigate the waters of symbols, ideals and themes, and that’s why some people think of us as a party band, and some characters come to us like, “Wow, you changed my life about certain levels of Chakra. ” And we accept all those ’cause our band is part of that.

FM: I read that you learned a dance routine for the music video of “My Dance Floor.” Is dance becoming an important element of your show?

GM: Our shows are pretty all over the place that it’s fun to have that contrast. “Guess What?” and “Gong Hotel” also, we had a dance routine that we invented ourselves. [For] this one, we wanted to have an outside eye, so [a choreographer] showed us some stuff, and we showed her some stuff and we came up with this dance. But for the launch, now for this tour, we have a routine, so it’s fun. When we start off our show, we’re going to have like a buttoned-up, uptight marriage, but every good marriage falls apart. You have the uncle that’s flirting with the aunts, and flirting with everybody, so we end up sweaty and dancing, so it’s kind of a bit of both worlds. We have a bit more choreographed, and the rest of the show is more like punk.

FM: Did you have any new musical inspirations for this album?

GM: This year, my big coup-de-coeur was J. Cole and obviously Kendrick Lamar. I saw J. Cole’s performance on David Letterman and that just blew me away. It was a live performance and it was just him and it was intense — like his flow, and he sings great.

FM: Is there anything else you’d like people to keep in mind when listening to Light the Sky?

GM: Sit down and read the album, read the lyrics. We always put the lyrics in the CD cover and I think we’re in an MP3/streaming/Spotify [age], where you don’t have the lyrics in front of you and we’re artists that sit down and take the time to write, and to put stuff on paper and for me, I stand by every single word I put in there. There’s different layers of the onion to peel off, and even if you don’t like onions, if you put it in the pan long enough, there’s lots of sugar in the middle that’s really sweet so there’s other layers to discover. So basically, just sit down and try to maybe listen to the lyrics, and if not, party on Wayne, and let’s do it. ■