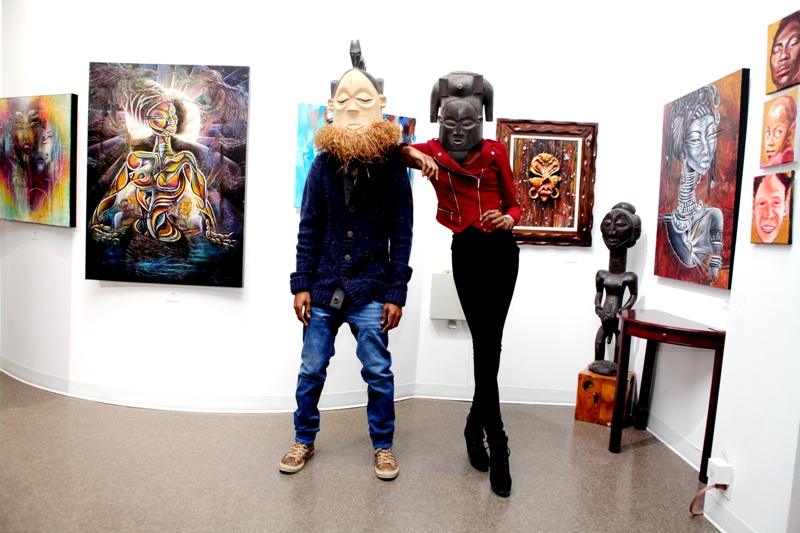 Many of us who follow Montreal’s street art and graff scene will remember the first time we were stopped in our tracks by the bold, eye-catching work of a young, Montreal born and raised artist named Maliciouz. Her murals and canvases portray elegant, proud black women, often sporting jewellery, headgear and body make-up in tribal styles drawn from African and Afro-Caribbean cultures, and often portrayed in ways that give them a graceful and authoritative air of stewardship towards their surroundings — the city, the earth and their family of humankind. For me, it was during last year’s FRO Festival, where Maliciouz livepainted from the stage.

Now, a year later, I caught up with Maliciouz to learn more about her work as she launches an exhibition alongside fellow artist Kandolo called Afropop.

(Note that this interview was conducted via email in French, and translated into English by Alex Rose.)

Lisa Sproull: Can you please tell us a bit about yourself and how you became an artist?

Maliciouz: I’ve always drawn. In school, my notebooks all became sketchbooks eventually. Around Grade 10, I started personalizing my clothing to renew my wardrobe without spending too much more or dressing like everyone else. That’s where it all started, which led me to take business and graphic design classes. Even though I took those classes in order to be able to work on my own projects, I felt like if I continued, I would lose my essence. Everything we learned was with the ultimate goal of commercialization and client satisfaction. To be confined to where I had to stifle my own creative voice while watching art students let themselves go and push themselves further was a real turning point. That’s when I decided that I should simply study arts. At some point, people told me they were buying my customized airbrushed t-shirts in order to frame them. It inspired me to airbrush directly on canvas instead of clothing and I started painting images that represented my values with more freedom.

LS: Your works often portray strong, proud women. Why is it important for you to depict women in this way?

M: At the beginning, I was very much inspired by my surroundings and represented them as is — a little more “street” and not necessarily putting forth positive values. With time and probably a little more wisdom, I started to ask myself what I really wanted to leave as an impression. What values did I want people to associate with my art? I started adding the things I thought were lacking, the things I wanted to see as images. That’s when I decided to paint proud, black, positive images to counterbalance the degrading and negative images that I think are much more commonplace.

LS: Do the styles of jewellery, headwear and body paint you choose for your paintings represent a particular tribe or regional culture that is significant for you?

M: My inspirations are drawn from the cultural elements of various nations, primarily African and West Indian ones. In most of my work, I am not seeking to represent the culture of a particular region or country — my goal is to make portraits that represent the culture of the black diaspora as a whole. People of different nations who have something in common can see themselves in the same images since many elements such as jewellery, headwraps or body paint are found in similar variations from one culture to another. 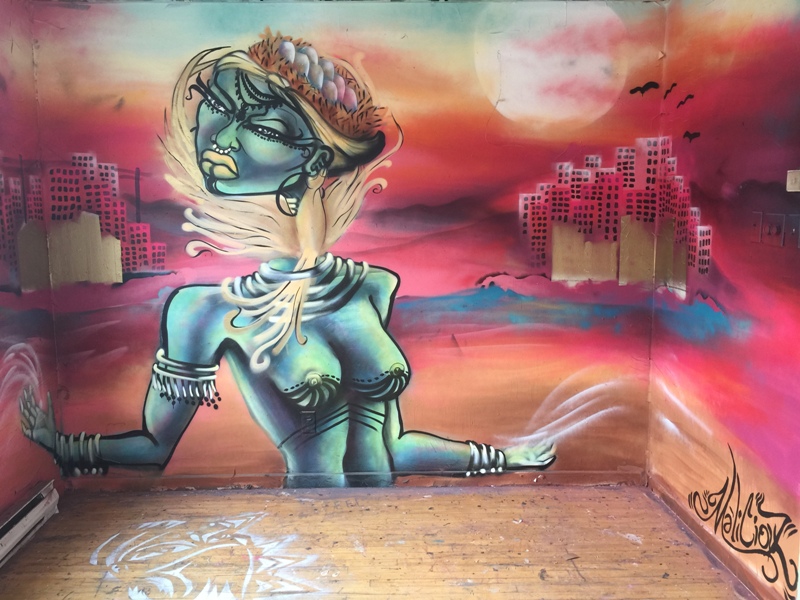 LS: Please tell us a little about the works you chose to display for the new exhibition.

M: Kandolo and I chose pieces that represent popular Afro culture. For my part, I chose the ones that represent my vibe the best. I chose the most colourful pieces, including many portraits. I’m also presenting a sculpture made of a head carved out of wood, set on a base composed of used cans and paint containers — it’s my first time showing this piece in a gallery setting. I also have more graphic paintings and a few pieces that I made using spray paint that draw on my work in murals and graffiti.

LS: During February, we are celebrating Black History Month and the achievements and creativity of black cultural creators and their contributions to our shared cultural atmosphere. Are there some artists who are particularly inspiring to you whose work you follow closely?

M: Musically, I recently discovered the duo Oshun which has been in heavy rotation. They sound sort of like Erykah Badu or Lauryn Hill but are younger. I also love Travis Little and his album Gate Keeper. His vibe is spiritual hip hop. There’s Jenny Salgado, aka J.Kyll, who’s an enormous inspiration. Her blunt talk and the fact that she’s a pioneer as a woman on the local hip hop scene has really encouraged me to fully embrace who I am and express myself without compromise. There’s activist and documentary filmmaker Will Prosper, who’s fully invested in his convictions, and painter Kosisochukwu Nnebe, who’s active on the black feminism front. Also the Kevin Calixte, a contemporary photographer, and Séadé, a painter with whom we collaborated on the Les Héritiers project last year.

LS: How do you think we as individuals and together as a society can best address our ongoing problems with inequality and injustice, which affect black women to an even greater degree due to their position at the intersection of racism and sexism?

M: I think the best way for black women to be equal is to accept who we are without compromise! To take and claim what is rightfully yours. When there’s a subtle or flagrant injustice or a micro-aggression, do not let them past you, and be in control of your own defenses. There are so many frustrating situations where your first reaction is to be closed off, but those are also the perfect moments to face uncomfortable truths or confront the concerned parties directly. Collectively, we must be more open to differences in order to foster the kind of respect that will abolish inequality. Recognizing through our actions the inherent value of every individual without feeling threatened is, in my opinion, the key for great positive change. ■

Afropop, featuring work by Maliciouz and Kandolo, is on at Espace Mushagalusa (533 Ontario E.) through Feb. 14.

Positive vibes all around.

The Prime Minister was disappointed about the pipeline but praised the new President’s other acts.