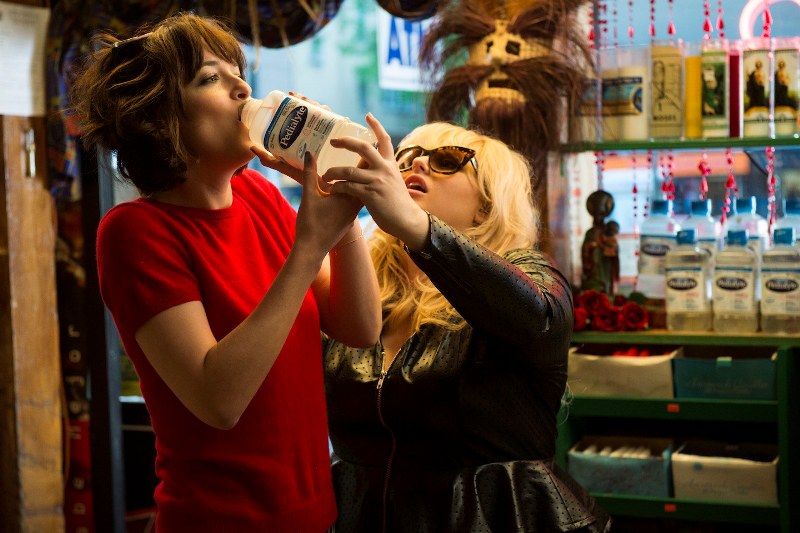 Dakota Johnson and Rebel Wilson in How to Be Single

I recognize the necessity of Hollywood studios pumping out romantic comedies on the regular. They’re pretty financially fool-proof and even great actors seem to have no qualms taking roles in them. They’re the least objectionable form of mercenary paycheque-cashing, and sometimes they can actually be pretty good.

Still, I question the need to trot out the “this is what dating is like these days” multi-character rom-com every other year. How to Be Single comes to us courtesy of a writing team that’s already been responsible for Valentine’s Day, He’s Just Not That Into You, What Happens in Vegas and Couples Retreat. Their body of work represents a truly forgettable cross-section of movies that I have seen but remember very little about due to their deep commitment to being interchangeable. How to Be Single isn’t particularly different in that respect — note the timely, pre-Valentine’s Day release date.

Alice (Dakota Johnson) takes “a break” from her longtime boyfriend Ken (Nicholas Braun) after she graduates college in order to open up her horizons. She moves to New York City, gets a job as a paralegal and discovers the wonderful world of dating thanks to her hard-partying new BFF and co-worker Robin (Rebel Wilson). Her first dalliance is with Tom (Anders Holm), a perpetual bachelor/bartender who secretly holds a flame for high-strung, online-dating-addicted Lucy (Alison Brie), who’s convinced that true love is found through an algorithm. Her second is with a wealthy developer, David (Damon Wayans Jr.), who’s still reeling from the death of the mother of his daughter. Meanwhile, her OBGYN sister Meg (Leslie Mann) decides to have a baby by herself after years and years of resisting the crushing responsibility of giving life, only to have that complicate her dalliance with a sweet, younger man (Jake Lacy).

Even if How to Be Single originally takes the form of an intertwining, multiple-character fresco, it pretty much settles for making Alice the main character. This results in an overstuffed movie (110 minutes!) where plot strands are left to fizzle out when they don’t feel like they intrude on the main story. Brie’s subplot is particularly wonky in that respect; she’s all but removed from the film right after a love interest played by Jason Mantzoukas is introduced. It feels like one of those bloated Garry Marshall sapfests has somehow been haphazardly edited for TV, leaving dead ends everywhere.

How to Be Single’s biggest problem, however, is way more fundamental than that: it’s that it’s barely got a concept to hang a movie on. About 99 per cent of romantic comedies are about people who are single at some point in the film; that’s the natural resting state of a romantic comedy, but it also seems to be the sole angle taken by the movie. The chief difference between this movie and pretty much any other single-girl-in-the-big-city release of the last 10 years is that the advice-giving characters are also single and not simply a married couple living in the suburbs with their whirling-dervish children. Frankly, almost everything about How to Be Single has been explored in more-than-satisfactory fashion by Sex and the City, Something Borrowed, Girls, He’s Just Not That Into You, Definitely Maybe, Obvious Child or just about any other “grounded” romantic comedy of the last 10 years.

So what does that leave us, the viewer? A game cast, even if some are wasted. Johnson proves to be a pretty likeable and organic screen presence when not saddled with the slick, soulless material of a 50 Shades of Grey. The script might not have much to say, but it does manage to avoid some of the more obvious pitfalls of the genre; it’s nice that the film doesn’t lead to the inevitable climax where she has to pick between the hot-but-rude and nice-but-plain options, but all of it adds up to not much in the long run.

Last year, a movie called Sleeping With Other People starring Alison Brie and Jason Sudeikis was released to not much fanfare and piddly box office returns. It embodies much the same clichés as How to Be Single (in fact, it could almost pass as a straight remake of When Harry Met Sally…) but has an honesty and an introspection to its characters that place it in the upper echelons of the genre — I’d watch that one instead. Or both, I suppose. They’re not going to stop making them either way. ■

How to Be Single opens in theatres on Friday, Feb. 12. Watch the trailer here: