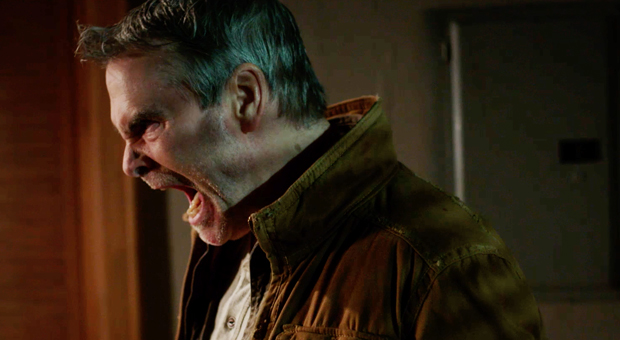 Henry Rollins in He Never Died

Most people know Henry Rollins as the third (and longest-running) vocalist of the seminal hardcore punk band Black Flag. Almost as many people have seen him act in projects as diverse as Bad Boys 2, Sons of Anarchy, Adventure Time and Heat. A workaholic since the Black Flag days, Rollins also writes books, hosts a radio show, writes a weekly column for L.A. Weekly and tours constantly with what he calls “talking shows,” a mixture of stand-up comedy, storytelling, sermon and spoken-word that sees Rollins expounding at length on a variety of topics for up to three hours without as much as a sip of water. Rollins has all but abandoned music since the dissolution of Rollins Band about 10 years ago.

I’ll be perfectly honest: I’ve never interviewed someone whose work I was so intimately familiar with as Rollins. From my angst-ridden teenage years listening to Black Flag to taking in several live shows, reading many of his books, listening to his podcast (Henry & Heidi, which he co-hosts with his assistant Heidi, is currently on hiatus), reading his column and plumbing the archives of his radio show every so often, I have been and remain a Rollins fan. The problem with being a fan of someone whose life is such an open book is that it’s hard not to ask them a question you already know the answer to.

Rollins is in Montreal to present his newest film He Never Died, a Toronto-shot horror-comedy in which Rollins — in his first leading role — plays Jack, a mysterious loner whose routine involves self-preservation through cannibalism and not a whole lot else. His careful routine is flipped upside down when the daughter he never knew he had (Jordan Todosey) drops by. The screening of the film at the Phi Centre will be preceded by a live conversation between Rollins and journalist Michael-Oliver Harding. The live conversation is sold out, but tickets remain for the film screening, which will also be preceded by a live stream of the conversation. What follows is my attempt to ask Rollins questions that I thought I did not already have the answer to.

Alex Rose: I know you’re an avid consumer of books and music but I’ve rarely heard you talk about movies. What’s your relationship to cinema like?

Henry Rollins: The older I get, the less I can sit through films without wanting to get up and do something. I feel lazy for watching instead of doing. It has been the same way with reading. If I read for too long, I feel that I should be writing. I do much of my viewing and reading on long flights. From doing a few films, I have a much better understanding of how hard every single aspect of making a film is. It has made me very much appreciate good acting because it is so hard a thing to do. When you see someone who can really do it, it’s impressive to the point of being freakish.

AR: I’ve heard you speak of your own acting talent dismissively in some of your talking shows. How was the experience of being the lead for the first time?

HR: I approached He Never Died the same way I approach any other film. I just go for it as hard as I can. The only thing different about He Never Died was how much I identified with the part. The situation of being in almost every shot was secondary. I neutralized that pressure by months of preparation. By the time we started shooting, I was all there. The only drag was that it came to an end. I didn’t want to stop showing up every day and getting into the story.

AR: Is there anything you haven’t had the opportunity to do, career-wise, that you would like to try?

HR: No. I am not an artist and I am not looking for a career. I am no one from nowhere, so anything that comes my way, I am grateful for. I am in a state of constant disbelief at what I get to do. I don’t understand why I have an audience, get asked back to do something again like acting, or anything else. I am grateful for the opportunity to work at something as hard as I can but have no understanding as to what anyone sees in me. So, there is nothing on my to-do list besides geographic locations I want to go to or go back to. There are a few people I want to kill and a few I would like to maim but I highly doubt that will happen. I never wanted to be anything after I got out of high school. I thought my life would be one boring job after another.

AR: I was at one of the New York Dinosaur Jr. shows in December (the one where you did “Don’t” at the encore). I know you’ve said you may never do music again, but that certainly didn’t come across in your performance that night. How does it feel to be back on stage in situations like that one? Does it ever stir the desire back up?

HR: I did the song with Dinosaur Jr. because they asked me to. It wasn’t my idea. I told them I would do it at soundcheck and if they still wanted to do it, I would do it on the encore that night. I told them to be very honest, that if it wasn’t any good, to tell me because I would be the last one to be surprised. They said it sounded good and later that night, you saw what happened. That was just me committing to the moment. That’s how I do everything. When you hit stage, you’re either all in or you’re faking it. That’s how I see it, anyway. I am not a musician, so for me, it was all a time/place/age thing. I don’t want to go backwards. For me, it would be pathetic. Some old man onstage bleating away. I do the occasional guest moments like with Dinosaur Jr. if I think I can be effective but it’s not anything I think about a minute after it’s finished. ■

In Conversation With Henry Rollins is happening at the Phi Centre (407 St-Pierre) on Saturday, Feb. 20, 5 p.m. (SOLD OUT). Remaining tickets for the screening / live stream can be purchased here.