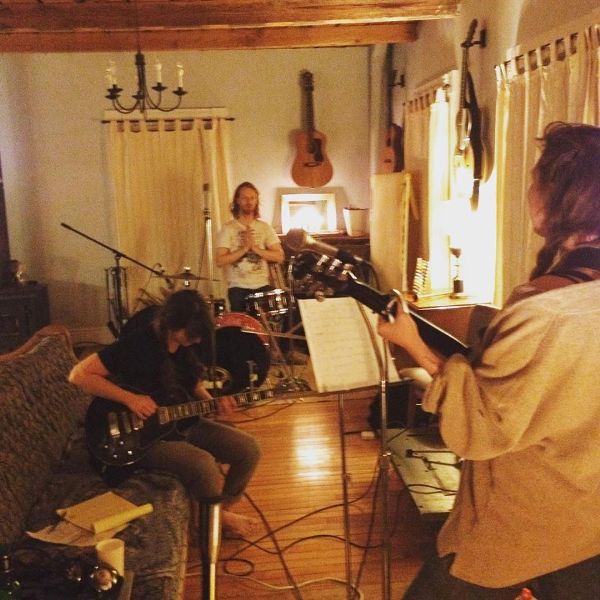 Peter Rowan has made a career out of launching projects that share East Coast rock music with the rest of Canada and beyond, from his early days running punk label DTK Records out of his downtown Fredericton apartment to managing the acts that gave Halifax the nickname Seattle of the North in the 1990’s — like Sloan, the Hardship Post and Moncton’s Eric’s Trip — to founding the annual music festival Halifax Pop Explosion in 1993.

A few years later, while taking the train from Montreal to Toronto, a young Daniel K. Seligman struck up a conversation with seatmate Rowan over a milk crate of records between his feet. Seven months later, the new friends launched the first edition of POP Montreal, where Eric’s Trip breakout solo star Julie Doiron performed in a line-up that also included Stars, the Walkmen, Blonde Redhead, the Dears and Broken Social Scene, among others. Rowan later played smaller supporting roles in other East Coast start-up festivals like Sackville, New Brunswick’s Sappyfest (launched by Doiron in 2006) and Fredericton’s four-year-old Shifty Bits Circus.

Having recently relocated to New Brunswick after spending many years living in Montreal, Toronto and most recently Ottawa, Rowan took in his new surroundings of open fields on rolling hills, waterfowl parks, the nearby Atlantic coastline, and the local bowling alley / show venue called Thunder & Lightning, and said to himself, “It’s about time I started a new project!”

With that, the Greville Tapes Music Club was born. The idea behind the project is set up a blind date for two musical acts to record a four-song cassette in Greville, NS (where salty ocean water from the Bay of Fundy creates tides 30 feet high as it flows into the Minas Basin) followed up by a mini-tour in Eastern and Central Canada. The project’s first pairing was Fredericton’s Motherhood (also the driving force behind the Shifty Bits Circus music fest) and Ottawa’s Catriona Sturton of Plumtree. Their tape came out in December.

The second was Montreal power pop trio Nancy Pants and Rowan’s old friend Julie Doiron, who since her days in Eric’s Trip has put out ten albums, won a Juno Award (for her 2000 collaboration with The Wooden Stars) and was shortlisted for the Polaris Prize for her 2007 album Woke Myself Up.

Since recording together from Jan. 25–28, they’ve four East Coast cities, and will be wrapping their tour in Montreal at Bar le Ritz PDB this weekend.

I connected with Greville Tapes orchestrator Peter Rowan for a phone interview, conducted from the merch table during sound checks for Thursday night’s Greville Tapes show at Toronto’s Lee’s Palace.

Peter Rowan: I moved back to New Brunswick, to Sackville in September, and during the summer I’d been going to Dave and Colleen’s [from the band Construction & Destruction] beautiful studio and this amazing space in Port Greville, which is a dot on the map beside a slightly larger dot on the map in Nova Scotia. I loved going down there, it was a place where I just felt so content and so happy. It’s an amazing place and really inspirational. When I moved back, I asked myself, “How can I make it so that I can go to Port Greville more often?”

I had some ideas like this kicking around in my head. I always loved the CBC Fuse show where they get people together, so I just started thinking about bands that I thought would be cool. The idea was to make it like a blind date and see what happens. The first one was fantastic, it worked so wonderfully well, and the second one is amazing, too. The artists love it. The recording atmosphere in this place is so magical and everybody really bonds. Generally speaking I’d say [the participating artists] are going to be friends for life, so that’s really gratifying.

LS: So everyone lives together in the house for a few days?

PR: Yeah, it’s a big house with cottages around it and a big communal kitchen, a big old farmhouse. Basically we arrived there Sunday night, everybody plays the music that they’re going to record — Julie played her two songs and Nancy Pants played their two songs, and everybody sleeps on it and gets up Monday morning and starts going at it. The sessions are really chill; everyone is working together and we have meals together and walk down to the beach and hang out. It’s totally a bonding experience. 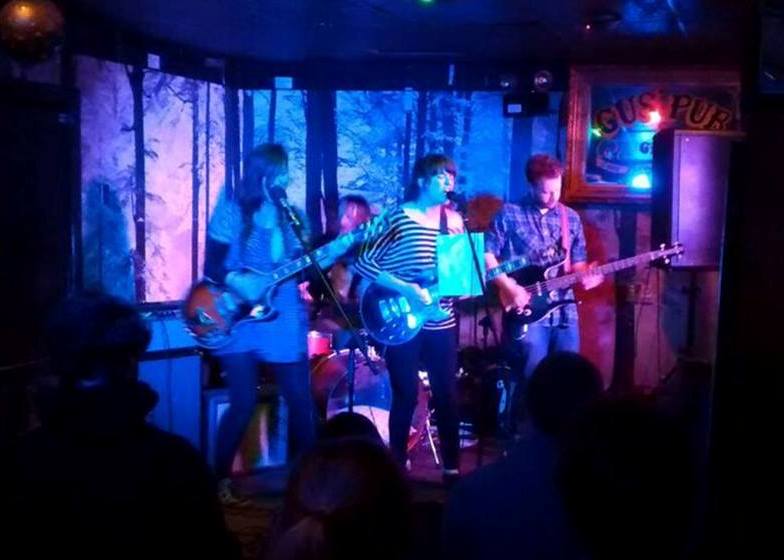 LS: What’s the response been like from audiences at the shows you’ve already done in Sackville, Halifax, Fredericton and Moncton?

PR: We drove into Halifax last Friday in the middle of a raging Nor’wester, it was one of the top 10 winter drives I’ve ever had. I thought we were going to get there and there’d be nobody. Things were being cancelled all over the place. But Gus’s is a great pub with a great local community around it, so we had over 100 people, which was phenomenal! So the shows have been going really well. Julie has a bit of a following so we knew we were going to be able to do decent shows.

LS: How did you decide to pair these two particular bands together?

PR: I was trying to think of people that I know — I know a lot of people, so I was trying to think of people who are not intimidated by something like this but who would embrace this collective initiative, and they have to have a certain personality for that. I have some parameters that I’m working with: I’m trying to have someone from the East Coast paired with someone from elsewhere, and I’m trying to have a younger band paired with a more established band. I’d seen Nancy Pants and I just thought they were so exciting and felt that they would be good fit for Julie to kind of step outside of her comfort zone.

LS: There’s also some involvement from Penelope Stevens from Motherhood and Fredericton’s Shifty Bits Circus, right? Tell me about how she got connected to the project.

PR: I got to know Penelope through Motherhood and the Shifty Bits Cult, which is this organization that she’s involved with in Fredericton, this amazing collective doing all these interesting sort of initiatives and festivals that are bringing artists in and stuff like that. Penelope’s just so awesomely organized and passionate, it was really exciting and very quickly I recognized that I can only do so much myself, so I asked her if she would continue working with me on the idea. She’s a great partner. I’m also hooked up with this label called Monopolized Records, based in Saint John, New Brunswick. To me it’s pretty important that we build up our local community through this thing, right? Do as much as we can locally and use it as a building block for everybody.

PR: There are so many amazing bands and so much good music going on there, so part of it was wanting to showcase some of that, to take these bands that don’t yet have much of a national profile and pair them up with some that are a little bit better known. At the same time, some of these more established bands can get inspiration from these younger bands. For this project, the bands work together as equals despite what their backgrounds are — they’re working as peers. And I just know so many people in the business, it’s pretty easy to just go ‘left coast, right coast,’ and figure out who fits.

LS: Who are you planning to showcase in future editions of Greville Tapes?

PR: The next session will happen during the last weekend of March and will be Little You Little Me from Saint John and a fellow named Eamon McGrath, who’s a bit of a punk rock legend guy, from Alberta originally. He’s played with Julie and the Wrong Guys. They’re already emailing back and forth talking about their crazy ideas. The fourth one is booked but I can’t really talk about it yet.

LS: Since these sessions are taking place at the home and studio of Construction & Destruction’s Colleen Collins and Dave Trenaman, will we see a future Greville Tapes collaboration that they’ll be featured in?

PR: I’m trying to cook up something special for them, but it would probably not happen in Port Greville. We’re working on a couple of ideas. Right now we’ve got a list of about 12 or 15 artists that we’re thinking about for future series.

LS: I know you’ve been working with Julie Doiron for a long time — what has that working relationship meant to you over the years?

PR: I’ve known Julie since she was 17 and started working with her while she was in Eric’s Trip. We’ve always stayed close as friends, and this was good timing for her. She was looking for something to give her a bit of inspiration — a little kick in the “nancy pants.” It’s great for me to see her having such a good time.

LS:How did you first get connected with Nancy Pants?

PR: They were playing a POP Montreal show in Ottawa and I went to check it out. I knew Adam so I went over and we hung out for a bit. I’d never heard Nancy Pants. When they started playing, within 15 seconds I was going, “WHAT? This is AMAZING!”

LS: I can imagine Julie and Ohara must be some kind of kindred spirits.

PR: Definitely! She and Julie have bonded like crazy. Everything has far and away exceeded my expectations. We’re now starting to get solicitations from bands who want to do sessions.

LS: What do you hear coming out of the combination of these artists?

PR: Each side of the tape is distinctly the artist who’s doing their own songs, but it has a different flavour. One of the Nancy Pants songs basically sounds like the best Stereolab song you’ve never heard. It’s amazing. On one of the songs, they do these harmonies and Ohara is singing in Japanese and Julie’s singing in French. It sounds like people I really like having a good time together. It doesn’t sound forced, it sounds fresh and you can tell they’re really into it.

As the shows go on, you can totally see them getting tighter and tighter. The Montreal show is a hometown show for both Nancy Pants and Julie — she lived there for five or six years. There will be plenty of friends. It’ll be fun; we’re going to have a good time! I’ve been doing stuff for a long time, and by a country mile this is the most satisfying thing I’ve ever done. ■