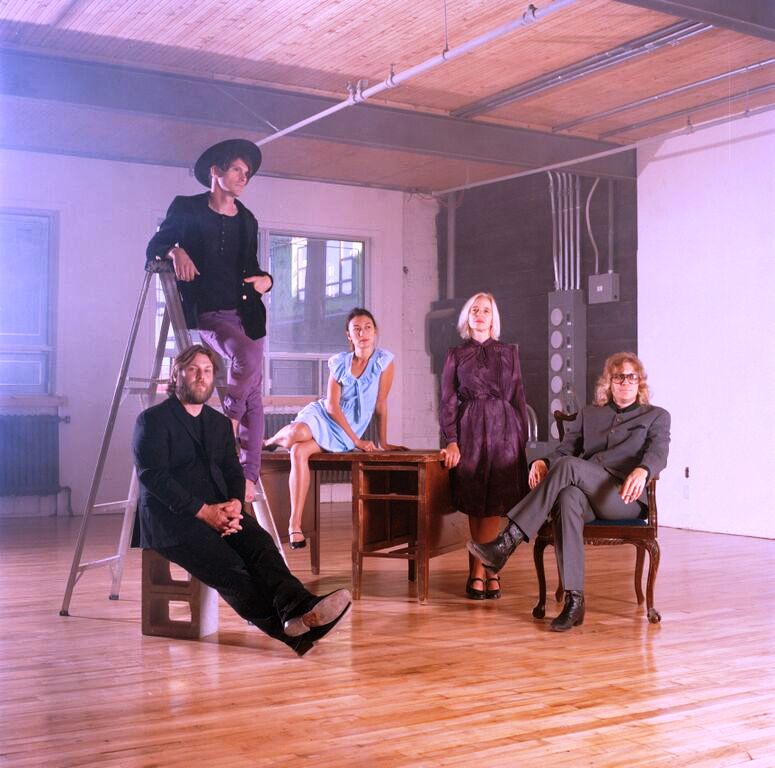 “Jesus, what a son of a bitch to pull off. Holy crap!”

Jace Lasek, frontman for Besnard Lakes, isn’t talking about their new album, A Coliseum Complex Museum (more about that magical beast in a bit), but the most recent show they played in Montreal. It happened back in September as part of POP Montreal, at the Rialto’s upstairs space, and what made it so special (and a such a nerve-wracking endeavour behind the scenes) was the band’s expansion to a 17-piece, with very little lead-time for rehearsals.

“My stomach went into knots, but we had such amazing people playing with us,” Lasek says, referring to the long list of music scenesters  who joined them, including Katie Moore and members of Stars and Thus Owls. “It set my heart aflutter to see everybody so excited and helpful and enthusiastic. When we finally got up on stage and played the first two songs, I was like, ‘Holy fuck! This is amazing! We actually did it!'”

The show was filmed and recorded, and the band plans to make it into a live album and perhaps release the full-length video online. (Footage from the gig has already been used in the music video for “Golden Lion” — check it out here.) And Besnard Lakes will be reassembling as a 17-piece in April for a show in London, with a new crew of musicians, including Swervedriver’s Adam Franklin, Wolf People singer Jack Sharp and a string section.

In the meantime, the band — that is, the core line-up of Lasek, Olga Goreas, Kevin Laing, Sheenah Ko and Robbie MacArthur — is gearing up for another big hometown gig, to launch their new record A Coliseum Complex Museum. While it was a challenge to wrangle and write parts for a dozen extra musicians, producing a mammoth psych-rock/dream-pop sound is something Besnard Lakes have mastered on stage as well as in the studio — most indie rock quintets would buckle under such sonic weight, which feels as heavy as it does light. That’s where magic comes in.

A Coliseum Complex Museum is the fifth Besnard Lakes album, and as far as studio wizardry goes, it helps that the band is experienced, particularly Lasek, who’s a full-time producer at renowned Montreal recording space Breakglass Studios. The other key to their musical alchemy is thinking big — album-size.

“All of our records are trying to achieve this idea of album immersion,” Lasek explains. “When I was growing up, me and my friends, that’s what we did: listen to the whole album. I always knew that if I heard a good album, the band was good; if I heard a song that was good and the album sucked, I probably would never go back to that band again. That was ingrained in me.

“Coliseum Complex Museum is the conceptual place that you go to (chuckles) and it’s what you hear when you’re walking through this conceptual world of Bray Road Beasts and golden lions guiding you through this, like, Steppenwolf‘s madmen room where you enter into this sort of psychedelic otherworld. The hope is that you get lost in it for 40, 45 minutes.

“[Having a concept] also helps us visualize what we want the place to be. It helps me write lyrics because I can visualize a situation that the album is sitting in and I can write lyrics based on that.”

Previous Besnard Lakes records …Are the Roaring Night and Until in Excess, Imperceptible UFO were largely written in the studio, but this time around, Lasek & co. chose to do as much work as possible outside the studio, to alleviate pressure.

“UFO was tough. I hardly ever have downtime from the studio, but whenever I did we booked time at our own studio, which would be a luxury to most people. But some days we couldn’t get anything done. We were really trying to eke shit out of us that we just didn’t have in us, and it really bummed us out on occasion.

“For this record we didn’t even step foot into the studio until I had everything figured out. When we finally went in, we had a lot of fun because the template was there — we just had to add the spice.” ■

Jace Lasek was one of over a dozen local musicians who contributed to Cult MTL’s tribute to David Bowie. See and hear his favourite Bowie track and read his thoughts about the late music legend here.

The 21-year-old has a total of seven Olympic medals.

Phoenix has undergone another physical transformation for the Ari Aster horror film currently shooting in the city.