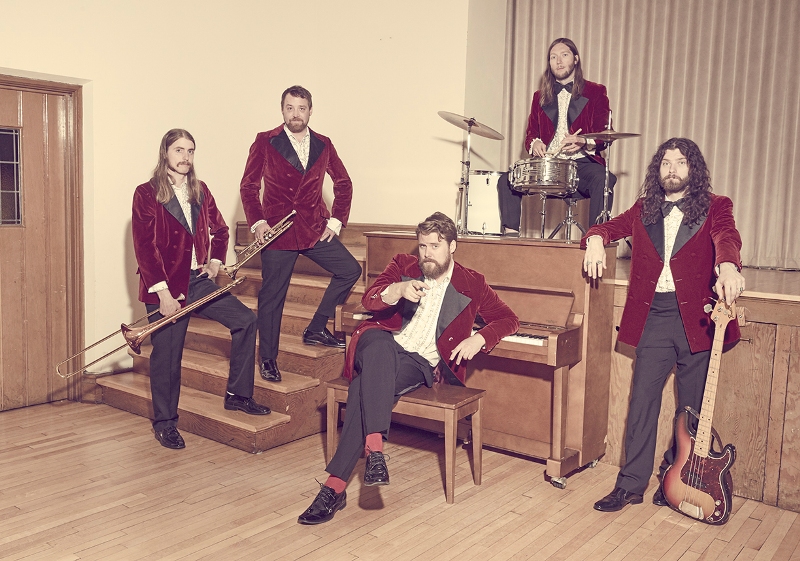 The Sheepdogs went from being a small-town Saskatchewan rock band to winning Juno awards, touring with Jon Fogerty and gracing the cover of Rolling Stone magazine. Now nearly 12 years after the band’s inception, they’re launching their latest album, Future Nostalgia, with a tour across Canada and the U.K.

Recorded in an isolated house in Ontario, Future Nostalgia goes back to the roots of rock ‘n’ roll in more than just its recording process. It’s a display of the band’s signature retro flare, raw sound and groovy riffs, reminiscent of the 1970s.

Ahead of their Montreal show at Corona at the end of this month, we had the chance talk to frontman Ewan Currie to discuss brotherhood, old-time music and the pleasures of touring.

Franca Mignacca: How did you come up with the title of your latest album, Future Nostalgia?

Ewan Currie: Well, it’s actually from a TV show, from the 1990s, called Mr. Show, [starring] David Cross and Bob Odenkirk. It was a comedy show from the ’90s, a kind of cult hit. There’s a line from one of its sketches that says “here’s the future nostalgia,” and I just thought that it’s kind of an interesting phrase, and I’m a fan of wordplay. Music for me, as with a lot of people, really ties into the concept of memory and nostalgia, and so we used it for the album.

FM: Why did you choose to record it in a house, as opposed to in a studio?

EC: Well, I think we’re fans of old rock ‘n’ roll and there’s a lot of great examples of bands [who did]. It’s a crazy hectic life sometimes, with touring and shows, hopping from one city to the next and so we see these bands kind of go off and hide away to make a record, as opposed to doing it in the city. You know the Rolling Stones made Exile On Main St. in some house in France. Led Zeppelin made Led Zeppelin IV in Jimmy Page’s country mansion. The Band made Music From the Pink in some house in the rural part of New York, I think. So we thought that we’d kind of roam that route so we forced everybody to get together, eat together and live side by side, and I think maybe some of that brotherly vibe kind of comes through in the music.

FM: This happened a while ago, but how did it feel to make the cover of Rolling Stone?

EC: That was pretty wild. I definitely read Rolling Stone around 97-98, when I was starting to really think about music more than just listening to it, starting to think about who these people were and the culture surrounding it — Rolling Stone was definitely a part of that. It was never exclusively my goal to be on the cover of the magazine, but of course, if I had the chance I’d take it. It made for a wild year in 2011 and it was kind of nice to just ride through it and it gave us a really good launching point for our career. We’ve been doing our best to keep things going ever since.

FM: After so many years of touring, does playing music still give you the same feeling it did when you started out?

EC: Yeah, it definitely does. We were rehearsing this week and we’re flying to England tonight for a couple of weeks, and then we come back for our Montreal show, and then the rest of our Canadian tour. We’re really excited man. I mean we love to play music. And playing new songs, adding new songs to our set list, really kind of gets the juices flowing, and it’s kind of fun knowing that you get tired of old songs and then you write the new ones. Of course we still play a lot of the old ones that people want to hear. We’ve been a band for what’s going to be 12 years this summer and we just love rock & roll music. We love to listen to it, we love to talk about it, and we love to play it, and I don’t see a time in the near future where we won’t. That’s just who we are.

FM: From your new album, are there any songs in particular you really look forward to playing this tour? Or any specific places you’re looking forward to?

EC: There’s a bunch. There’s a song called “Take a Trip” that I really enjoy playing, cause it’s got some cool guitar harmonies. We try to have a bunch of different styles of songs. We have a little bit of different grooves, and some are more rock songs, some [have a little more] of a country vibe sometimes. There’s a bunch of new songs that we love playing. Even just last week, we added a bunch of stuff to our set. This Montreal show, we are going to be debuting a few new tricks, like I think we’re going to have some instrument changes ‘cause some of the guys in the group can play different instruments so we’re going to have some cool things and new secrets in store.

Certainly, a city like Montreal is always one to look forward to because, I mean, everyone knows it. But, I’m pretty open-minded ‘cause you’ll head to some small little town in Europe and nearly the whole city turns out so there’s some memorable events there. Every day can bring something new but obviously cities like Montreal, San Francisco, London and Amsterdam, the cool sexy cities, we rely on those places. Experience has definitely shown me that you can have a great experience no matter where you are.

FM: If you could choose any band to tour with, whether dead or alive, who would you choose?

EC: Maybe, My Morning Jacket. I really like the way they approach their shows. They’ve got kind of a similar rock ‘n’ roll ethos and I think it’d be really cool to watch a band like that play every night and learn a few things, and absorb a few things. It’s always fun to be an opening band ‘cause you can go out there and play for the headliner’s crowd and try to steal their thunder a bit, and then sit back and watch them play.

FM: Why do you continue to make music?

EC: It’s part job, it’s part lifestyle. I grew up loving rock ‘n’ roll and listening to it, and for all the bands that I liked, their lives involve performing and creating, writing and recording, travel and meeting new people, and I mean everybody who loves rock ‘n’ roll is pretty excited about those things. It seemed like a pretty amazing way to make a career, and it’s been all those things. I don’t know if there’s necessarily a mission I’m trying to do but I like to think that we’re purveyors of high-quality, old-style, rock ‘n’ roll. If you look at other non-creative endeavours, something like wood workers, or leather workers, or even restaurants sometimes, that will specialize in old techniques, they’re not concerned with new technology and more interested in doing things in old ways. I think that’s kind of what we’re like with music. We know who we are and what we do and we try to be the best version of that each time we make a record. I think that there’s people out there that really like our kind of music, and you know rock ‘n’ roll doesn’t carry the weight that it used to. It’s a pop world and there’s a market out there for this kind of music. As young artists, if we want to be right there with the old blues bands, we’ve got to do the same thing.

FM: Your brother joined the band relatively recently. How has your experience changed touring with a sibling?

EC: It’s fun. Shamus and I get along really well so it’s not an issue. We’ve always had a really good relationship — I’m four years older than him so we’ve always had a natural brother dynamic that was never too competitive. He’s a great musician and a great guy so he fits in really well. Our band is really just a group of bothers, related or not, ‘cause we’ve spent so much time together and gone through so much. I know that when most people think of brothers, they think of the Gallagher brothers from Oasis that are always fighting. I think more often than not it’s probably a good thing. I mean if you get along with your sibling, then it only makes sense to play in a band with them.

FM: What can fans look forward to from you in the coming year?

EC: Well, we’ve really worked hard on our live shows. We have a new guitar player and he just joined up with us in the last part of last year. We’ve just heard him in rehearsals, and I think we definitely sound better than we ever have, more dynamic, and our set is better than ever. If you come see us live, you will be seeing the best show we’ve ever put on. In the little cracks of time that we have between doing all this touring, we’re already trying to demo new songs and work on a new album so that we can have that out sooner than later. That’s just it; we try to be good live and we try to make good records and that’s what we’re going to keep doing for the next bunch of years.” ■