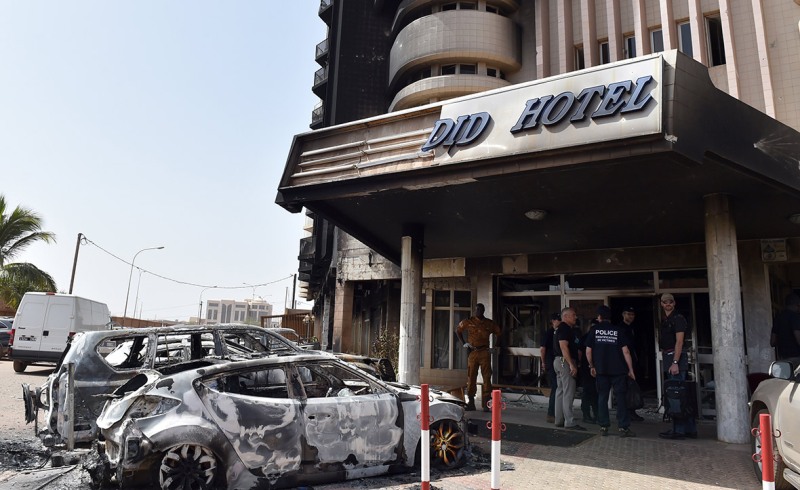 The aftermath of last week’s attack in Burkina Faso

A grieving mother has long been a powerful symbol of tragedy, and there have been no shortages of grieving mothers this past week after terror attacks in Burkina Faso, Indonesia and Pakistan. Here at home, Camille Carrier has been vocal in her anguish this week over the death of her daughter Maude, killed along with Camille Carrier’s ex-husband, Yves, his second wife, their son and two family friends by militants affiliated with Al-Qaida in the Islamic Maghreb (AQIM).

Carrier’s response, however, went way beyond grief as she stood in the media spotlight and demanded Canadian Prime Minister Justin Trudeau respond to the Al-Qaida attack in Africa that killed her daughter by ensuring Canada continues to bomb Islamic State positions in the Middle East.

Interim Conservative leader Rona Ambrose was quick to exploit the deaths for partisan purposes, echoing Carrier’s call for Trudeau to abandon his pledge to withdraw Canadian CF-18s from the bombing campaign. “These ongoing attacks are proof that decisive action is required to confront this threat, including fully supporting our coalition allies and keeping our CF-18s in the fight in Iraq and Syria,” Ambrose said in a prepared statement.

Carrier went farther, making the rounds of media outlets to personally attack Trudeau. “I’m revolted … he walks around with his nice hair spouting his empty theories, he’s on television condemning things but he’s not capable of joining in with the others who are supporting the French,” she said, referring to the bombing campaign.

Maude Carrier’s death gave her mother a major platform to voice opinions she had held prior to the attack. “Even before that I was ashamed (of Canada) that we weren’t participating in battle … he should go shoot those people,” Camille Carrier told Radio-Canada.

In many ways, Camille Carrier’s grief is no different than an angry call for revenge from the mother of a Palestinian child killed by Israeli missiles in Gaza or a Kurdish widow burying her family following the U.S. bombing campaign that forced ISIS out of Kobani. The desire for retribution is driven by emotion, not logic, and is the driving force behind such monumental mistakes as the U.S. invasion of Iraq (which as much as 70 per cent of Americans believed was involved in the 9/11 terror attacks, even though there has never been any evidence to support the theory).

There is certainly no connection between the AQIM attack in Burkina Faso and the war on ISIS, no reason to believe that one bomb or a billion bombs would have prevented what happened to the Carrier family or to Laval resident Tahar Amer-Ouali, who was among four people killed in an attack by ISIS-affiliated militants outside a Jakarta Starbucks last Thursday.

What IS certain is that bombing in Syria and Iraq by both the U.S.-French coalition and the Russian and Assad governments has produced millions of freshly grieving mothers, fathers, sons and daughters. Like the Carrier family, most of these victims are guilty of nothing more than being in the wrong place, casualties of a war in which they wanted no part. It’s a war whose roots are deeply tangled in past attempts by the West to impose its will and its geography on diverse populations it doesn’t — or doesn’t want to — understand.

As former U.S. State Department official Peter van Buren wrote this week in an essay outlining his advice for resolving the problem, “the war with ISIS is, in fact, a struggle of ideas, anti-western and anti-imperialist, suffused with religious feeling. You can’t bomb an idea or a religion away.”

It’s as ludicrous as thinking that the way to combat Front de Libération du Québec terrorism in Montreal in 1970 would be to bomb the Saguenay. Terrorism has never and will never be defeated by bombs; all bombing does is create a new generation of people who hate the bombers, a new pool of recruits for the next suicide attack.

Yet terrorism aimed at civilian populations in the West is being used as justification for massively disproportional responses, both in terms of attacks on civil liberties at home and bombing campaigns abroad. While we shrug at the deaths of more than 1,300 Syrian civilians in December alone, the deaths of seven Quebecers is being used to justify continuing a bombing mission that has already cost Canadians more than $500-million. That’s more than Ottawa spend on biomedical research in 2014. And although there are no definitive numbers for how many Canadian lives that research will save, it’s certainly much, much higher than seven.

Given that Maude and Yves Carrier were working as part of a humanitarian aid effort to build schools in Burkina Faso, it seems doubly strange to see their deaths used as justification to continue a bombing campaign that has killed and wounded uncounted thousands of Iraqi and Syrian civilians unlucky enough to live anywhere near an ISIS target. Given reports of their kindness and generosity, it’s hard to imagine that they would approve of efforts by Camille Carrier or Rona Ambrose to seek retribution by bombing communities rather than trying, as they did, to build them.

We will never wipe away the tears of grieving mothers by killing more sons and daughters. The Trudeau government has made the right moral choice and it shouldn’t let a mother’s angry tears cause it to shift course. ■