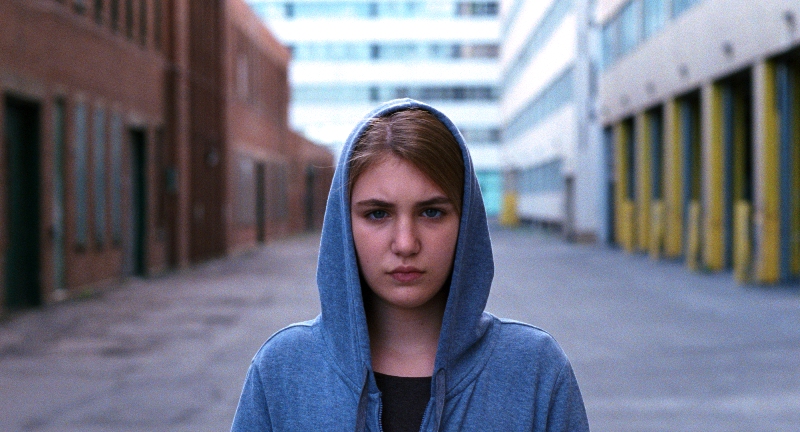 For most actors, junket interviews can be a taxing affair: they’re plopped before an anonymous journalist every 15 or 20 minutes and asked (presumably) variations on the same questions each time to which they (presumably) give the same answers each time. Sometimes the routine is broken up by a photographer or television journalist, but for 15-year-old actress Sophie Nélisse, the junket is nothing compared to the major menace in her life: high school.

“We started at 12:30 p.m. today, but I’ve been up since 6 a.m. studying,” explains Nélisse. “Honestly, I’d rather be just at school,” she laughs. “People tell me, ‘Oh, you’re so lucky, you get to miss school,’ but then when I have an exam…  Especially in Grade 10 because it’s so important on your CEGEP entrance exams, it’s pretty tough. Honestly, I pass but I’m barely above the class average!”

Nélisse has had to miss a lot of school the last few years. Since her breakthrough performance as Alice in Philippe Falardeau’s Monsieur Lazhar, Nélisse has appeared in Edward Zwick’s Pawn Sacrifice, Luc Picard’s Ésimésac and as the lead in The Book Thief. That’s only what’s been released so far – Nélisse has a whopping five films in the can awaiting release.

Today, our attention turns towards Endorphine, a time-bending psychological drama directed by André Turpin in which Nélisse plays one of three Simones, a young woman who struggles with the brutal and unexplained murder of her mother. (See our interview with Mylène Mackay, who plays Simone 2, here.) Turpin plays with the notions of time, space and character, doubling the film back onto itself  and constantly putting new questions in the viewer’s mind and playing with narrative through quantum physics. Nélisse has the most straightforward segment in the film, if you can call it, even though it plays with the dreamlike qualities of déjà-vu and often doubles back onto itself, forcing Nélisse’s character to come to terms with trauma she’s completely internalized.

It’s pretty heady stuff, but Nélisse says that the complexity of the script had little to no bearing on the on-set atmosphere. “I thought maybe the set would be super quiet, and everyone would be in their own heads, but that’s not at all how it happened,” she explains. “André is an extraordinary filmmaker. I also thought maybe since we were filming in the summer, you know, that can be a drag, too… We did have to wake up at 6 a.m., but it didn’t feel like getting up at 6 a.m. to go to work! André and I have a great rapport, and we tell each other off all the time. That’s just the way we talk; I’d walk in one morning and go, ‘Wow, your sweater is so ugly, where’d you get that?!’ and he’d go, ‘Have you seen your face? You look like you haven’t showered in a week!’ It was that kind of dynamic, so it made it light and fun. I had a lot of fun.”

I point out that Nélisse has mostly been in films that could be considered arthouse, a sphere in which most 15-year-olds don’t tend to find themselves. “I think the range of what I watch and enjoy has really developed with the projects I’ve worked on,” she explains. “When I watch movies with my friends, they tend to watch clichéd American films with happy endings. On the other hand, I’ve really begun to pick up on who’s a great actor as opposed to someone who’s on a cheesy TV show – I can tell the difference between, say, Johnny Depp and a guy on Teen Wolf  but, uh, if any of the actors on Teen Wolf are reading this, I’m not judging you. You’re great actors! Anyway, on my own I tend to watch things that are maybe a little weirder, a little creepier, a little stranger, that my friends usually find boring.”

“In my career I’ve tended to work with older people and come to consider them friends,” she continues. “I consider André to be one of my closest friends and he’s, like, 50 years old! But it’s hard sometimes to return to high school and be with young kids who judge each other and start all this drama. Acting is a profession that brings in a really vast variety of people and, yeah, there’s some judgment there, but it’s nothing like high school where everyone will pile on someone who’s dressed different, who doesn’t smoke or doesn’t listen to the same music. It’s honestly pretty immature, and that’s when I find it the hardest to go back to high school.”

Like Saoirse Ronan, Nélisse fits the mould of a child actor who’s never really been in a movie for children. “I don’t think being 15 necessarily limits my career,” says Nélisse. “It’s true that sometimes age is a huge factor. Often they’ll take older people to play younger roles, but what really bothers me is I’ll be up for a role and they’ll cast, say, a 16-year-old girl because she can work more hours or they’ll pick an adult that can play younger. In those situations I’d rather be older so I could play younger roles more easily. Then again, in older roles you move into rougher territory – things that have, say, rape scenes – and there are a lot of roles in that direction that I don’t really find myself going towards. After doing The Great Gilly Hopkins (a film aimed at a tween audience in which she plays a 12-year-old), playing little girls isn’t that interesting to me all the time, but I don’t really want to go into things that are too rough. Not necessarily adult roles, but not necessarily 12-year-olds, either.” ■

Endorphine opens in theatres on Jan. 22. Watch the trailer here: