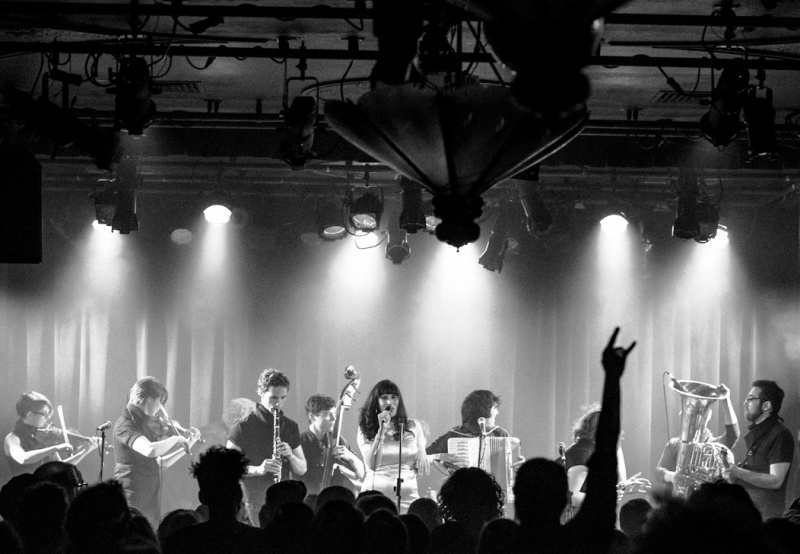 Montreal old-world gangster band Orkestar Kriminal have already won an award for their 2015 album Tummel — a GAMIQ for Best Roots Album— but they’ve been waiting ever since its release last March for shipments of the record on vinyl.

It’s become a familiar story for bands everywhere: as the popularity of vinyl in North America increases (2015 sales were up 40 per cent from 2014), pressing plants are being overwhelmed with orders. It’s been suggested that major-label albums by artists like Adele are routinely prioritized, leaving independent acts waiting for their merchandise for months and months. Whether or not that’s been the case at Toronto’s Cascade Record Pressing, Orkestar Kriminal’s plant of choice, it’s pretty obvious that this continent needs more vinyl manufacturers.

“It’s like we’re in a Communist country or something,” says singer and band leader Giselle Webber. “Why can’t they produce what the market wants?”

“But it’s nice — good quality vinyl,” she says of their album, which has arrived just in time for their Montreal show this week, and the tour to follow.

The Orkestar will be in full effect for their hometown show, with all 12 members, including some new faces and new sounds.

“We got this great, crazy-pro clarinet player, he’s Ukrainian from Israel, and it’s a completely different style. We had a  jazz clarinet player whereas now we have one who’s super klezmer,” Webber explains, noting that their drummer is now playing a hand drum, they’ve traded in a tuba for a sousaphone and they have a new steel-string guitarist, too.

“We also have a back-up singer, Anna from les Deuxluxes — she’s frickin’ amazing at harmonies. The double girl singer thing makes me feel like I’m in Heart or ABBA.

“I think the band’s just gonna get bigger, really.”

Webber says their next record will expand on the old-school international sounds of Tummel (read about that here), representing more of Montreal’s ethnic groups. “We can’t have a criminal underworld band without a couple of Italian songs — come on! Some Arabic stuff, too — there’s a whole slew of sketchy tunes in other languages out there.”

Prior to the next record, and even before Orkestar Kriminal embark on their tour, the band is working on a project that could get them into trouble with the STM.

“We’re about to shoot a music video where we’re gonna run into the metro and play in the cars,” Webber explains, “but we don’t have a permit from the transit people to do this, so we’re just gonna go with a camera crew and we have a budget for the fines we’re going to get. If we can get away with it, it’ll look pretty cool. We’re going to have a fake metro cop chasing after us and stuff; it may be kind of slapstick. It’ll be fun, and it’ll be worth it.” ■