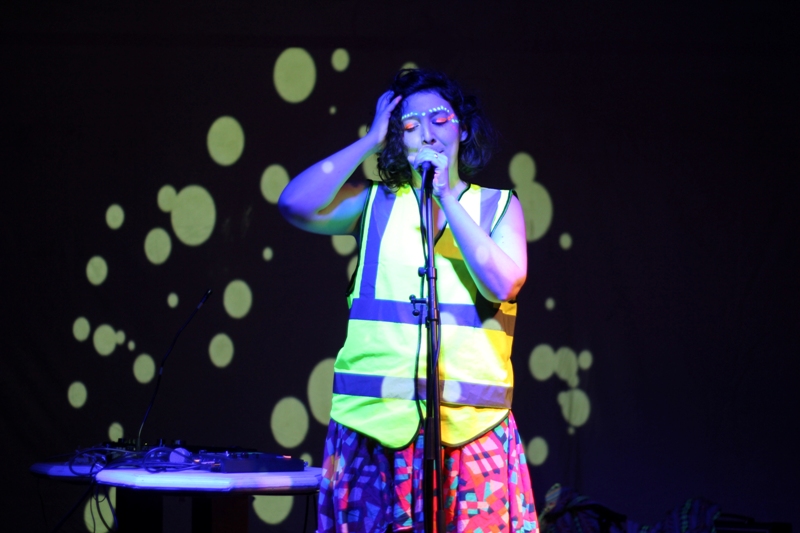 Far too many rappers rhyme about unimaginable excess. Few devote lyrics to describing debt and penny pinching. Xania Keane has no qualms about telling such tales of frugality and misfortune in her latest video, aptly titled “I’m Broke,” which is also a single from her latest album, All Alone Together. In the video she mops floors, attempts to buy pastries with spare change and defies the dollar bill, slinging clichés of typical rap videos in numerous other ways.

But of course the Montreal bred MC has always been unconventional. She doesn’t breakdance — she tap dances. She doesn’t rely on premixed samples in concert, instead looping those musical snippets herself into Kaleidoscopic synth arrangements that blend and blur like soothing hues.

And while many of her artistic decisions exude her offbeat creativity and boundless sense of humour, she is by no means irreverent or flippant. In fact, she began playing music at the age of 13, picking up the fiddle that she had literally inherited from her recently deceased father, fervently drawing a bow across those strings in dedication to him. After three years of fiddle lessons she began busking at the age of 16 as a summer job. From there she mastered tap dancing, performed with synth enthusiast Stephen Paul Taylor as a duo called Trike, busking on the streets of Vancouver, touring across Canada and Europe and even winning a Canadian talent contest called The Gong Show (not to be confused with the American TV show). During those gigs, Xania honed her stage presence, furthering Trike’s highly theatrical shows on her more recent solo tours by tap dancing in diamond encrusted shoes, aiming a bubble gun at the spectators in the front row and dousing them — much to their delight — before coating the entire audience with confetti.

Below the colourful, exuberant and ever unpredictable Keane tells us more about her dynamic performances, recording  All Alone Together, and more. 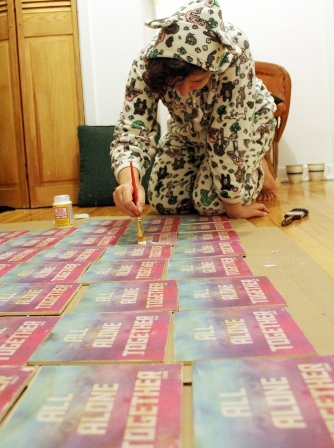 Kyle Mullin: What inspired the album title All Alone Together?

Xania: The phrase “all alone together” is a recurring theme in my life that holds lots of different meanings and I thought it could be meaningful to other people too.

“All alone together” could symbolize lonely thoughts like “We’re born alone, we die alone.  With these things in common, we’re together.”

Or existential thoughts like, “We do things so as not to feel alone, like fall in love, have sex, make art, listen to music…” Or lovey dovey thoughts like, “I love being all alone with you and just you, my soul-mate.”

KM: How has working on this album pushed you and helped you to grow as an artist?

X: Each album I’ve worked on has become more and more difficult because I’ve taken on more and more responsibilities. The first four albums I worked on as part of a duo (in Europe), so I only took on half the pressure. My first solo album had guest musicians performing on almost every song, who helped out a lot creatively. The music, the lyrics, the beats; this latest album was made almost entirely by myself.  I had to work harder than ever before, but it’s also been the most fun and fulfilling project I’ve done.  I’ve learned and grown so much by delving into each step of the process.

My live show is solo, I tap-dance, rap and loop by myself.  So this album is a lot more electronic than my last one, which was pretty folky.  It represents what my live show is like.

KM: What was the biggest challenge you faced while working on this album, and how did you rise to the occasion?

X: The most trying part was when all the writing and recording was finished and it was time to shape the songs.  Bobby (my partner) and I spent two whole months editing, re-recording, re-thinking the album.

You know the phrase “You can’t polish a turd?”  It kept going through my mind while making this album.  Sometimes it’s better to just re-record or remove something than to keep trying to fix it digitally.

I remember recording the last album and mentally telling my future-self, “This is hard! But don’t give up, just push through it!” So when the list of details, clean-ups and re-takes shrank and I was finally able to hear the songs as they were supposed to sound, it was such a relief.

The highlight of the process was getting my mixes back from Philippe Lachance (from the band Couteau Papillon).  He worked so hard on them and really went above and beyond anything I could’ve expected.  He added his own creative flavour to the mixes and really brought everything to life.

It was a hefty task to hand-make over 100 album covers out of wood. It was important for me to design a personal and unique cover for this album. So I thought I “wood” (get it!?) make a cover that doubled as a piece of art. I printed an image on pieces of wood with a pocket on the back that houses the CD and lyric booklet, so you can hang the album on your wall. (It took a lot longer than expected.)

KM: How did your experience touring Europe with Jonah Haché inform or inspire this album?

X: Jonah Haché is inspiring to be around because he’s always thinking about his music in one way or another and trying to better himself artistically. So when we toured together, we just turned into a cloud of ideas and thoughts on music, promotion, tech and how to keep surviving as an independent artist. (East-Coasters have been so kind to me!)

Jonah Haché gave Bobby a crash course in VJing. Now I have live projections during every show. I want to keep my live shows as entertaining as possible so projections are just a wonderful addition to the other elements in my shows.

KM: Tell me about the sequencing of tracks 10 and 11, “You Don’t Want To,” and “Put Your Arm Around Me.” It’s an interesting arc. What inspired it?

X: I haven’t noticed the arc between the two songs, but you’re right, it is there.  It’s nice that you caught that.  Now that I think about it, the two songs are similar thematically. “You Don’t Want To,” is about falling in love with someone in an unhealthy way, just wanting to suck them into you and become one entity.  They resist, they’re emotionless and cold towards you. But you think they’re just hiding their feelings for you, so you keep trying to pull them in.

“Put Your Arm Around Me” is about those moments after you’ve slept with a friend, but you’re both unaffectionate when in public (I’m sure lots of people have gone through this).  When you see them in public, your body is aching for them to just put their arm around you, or show you a bit of affection. Internally, you’re screaming, “Put you arm around me, like a lover should!” But they don’t, they resist and act like you haven’t just shared the most intimate thing any two people can do.

KM: Is there anything else you’d like to add?

X: I want to thank everyone who helped me with this album. (DIY for me has become do-it-yourself-with-lots-of-help.)  Currently working on two more music videos for the album. Look out for them soon! ■

Xania‘s latest album, All Alone Together is available in hand-made and digital versions here.