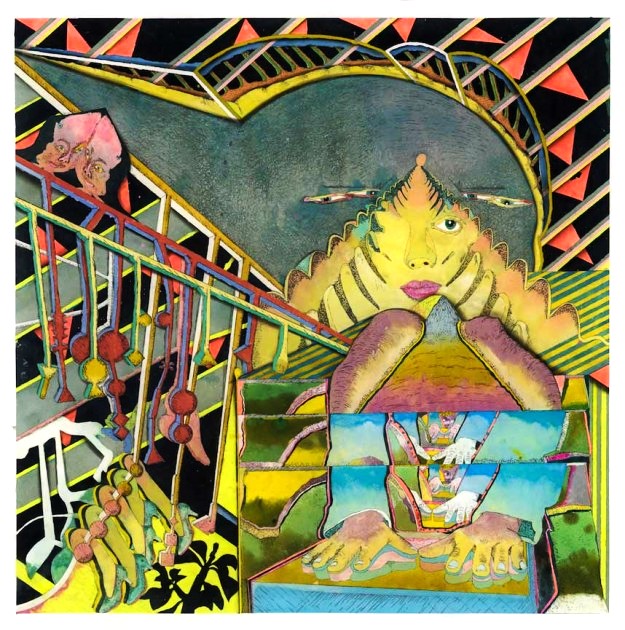 “I don’t want to be too romantic about it because they were just parties after all,” says Montreal painter Max Wyse about his days as a DJ in Vancouver’s mid-’90s afterhours scene, centred in that city’s Yaletown neighbourhood — then a transitioning post industrial grey zone not unlike the Mile Ex of mid-2010s Montreal — filled with warehouses and obsolete brick factories along a CP rail line. “But it was interesting and I was lucky to be involved in that stuff at that particular time.”

Wyse’s paintings, on display until Dec. 19 at Galerie Yves Laroche in an exhibition called Midnight Fondue, are not particularly romantic, but they do capture something essential about the sensory experience of crossing into the parallel dimension of the dancefloor. Kinetic and kaleidoscopic, the works—brightly coloured, highly detailed and humorous to the brink of absurdity—are painted directly onto plexiglass plates from behind, so that the layers are applied in reverse order from the foreground to the background in a technique that Wyse describes as the result of years of experimentation and exploration of folk traditions of reverse-glass painting across several Central and Eastern European and Asian and South Asian regions.

Though the 40-ish-year-old Wyse came of age in the ’90s house music loft party scene, much of his aesthetic is inspired by the style and colour palettes of the glammed up, mirrorball festooned discos of the 1970s. 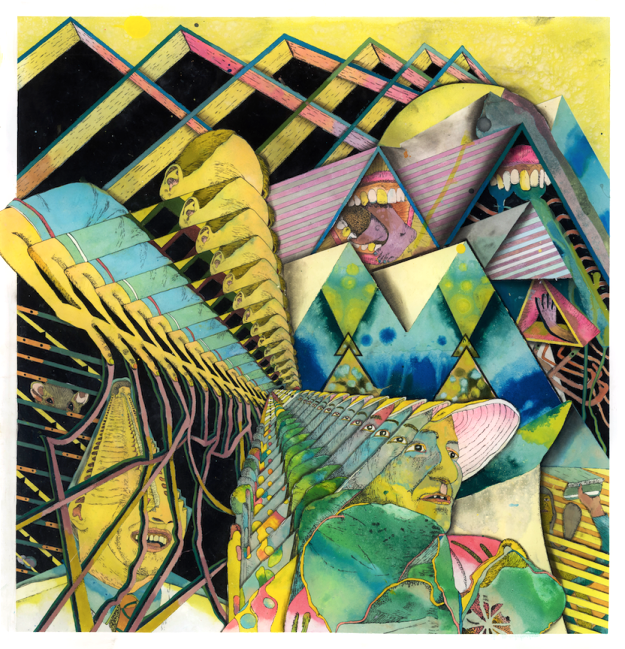 “It’s not nostalgia because I was too young to really be conscious of what was going on,” Wyse explains, “but the psychedelic poster art was probably the first thing that I encountered that I would have recognized as being art. Those kind of things tend to leave an impression.

“There is also something you get from horror movies,” Wyse continues. “The pleasure of being disturbed in the realm of fiction. Coming across an image where you don’t really know what’s going on, and it kind of shakes you a little bit but also has the potential to be really funny. It’s somewhere between horror and comedy. [My work] has a grotesque quality to it for sure.”

This grotesque quality is seen in the details of the works — look closely and you’ll find nipples, eyeballs, teeth, arms and legs and other body parts excised from their usual forms and remixed with other organic elements such as plants, animals and food in bizarre and surreal arrangements, juxtaposed with sharp edged geometric shapes in compositions that communicate a fluidity of movement, like watching dancing bodies whose movements can be seen only in strobe-lit flashes.

“I can’t just do a non-figurative work,” Wyse tells me when I mention the prominence of people, plants and animals in his pieces. “There has to be something that’s the object of some kind of event. I find with abstract or nonrepresentational painting you don’t get that, and I’m not interested in that. I always had to have some kind of life form, whether it’s a plant or an animal or an insect or a person. The paintings on display at Galerie Yves Laroche are also the last ones Wyse will produce as a resident of Montreal, as he prepares to pack up his studio and move with his wife to Perpignan, France, on the Spanish border, not so far from Barcelona. I ask if living in Montreal has influenced his work.

“There’s a certain amount of mourning as well when you pick up and leave, but I’m looking forward to a change. Montreal is a great place, but it has its limitations as well. What I find most interesting about how a place can influence me is just the stuff that I find. I’ve got a whole lot of cut out imagery that I’ve collected from old magazines and books and shit like that that I’ve found in second hand stores. Those are the kinds of things that have always been really important. I guess now I’ve probably turned a little bit more to the Internet to find images — you don’t get dust on your fingers for one thing — but there’s still something that you get from old books and magazines that will never ever find their way onto the Internet.

“I consider myself really a collagist in some ways,” Wyse says, “where you’re taking disparate images and just finding the right ones to fit together, and the right way to fit them together. As a DJ that was the most fun aspect: finding the two songs that go together that were inseparable in a certain sense, with a coherent composition. I probably learned that by doing music.

“I was always doing visual art and it ended up happening where I was leaving the music behind. Making images was always more satisfying. It’s less fleeting somehow.” ■