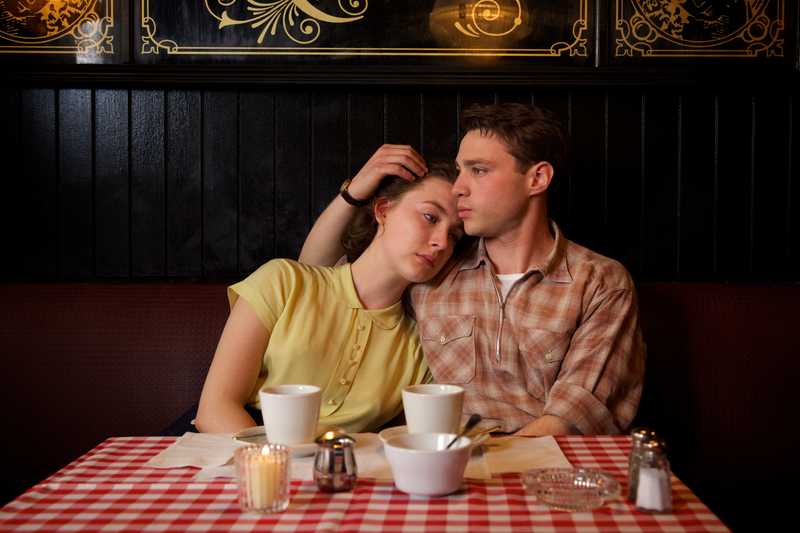 The current generation of young actors has mostly managed to bypass the rough transition from child actor to young adult. In Saoirse Ronan’s case, the transition appeared more or less seamless. Revealed to most audiences when she was 13 in Joe Wright’s Atonement, the 21-year-old Ronan has been headlining films (Hanna, The Host, The Lovely Bones) for nearly a decade.

In John Crowley’s Brooklyn (adapted from the novel of the same name by Colm Tóibín and shot partly in Montreal), Ronan plays Eilis Lacey, a young Irish woman who moves from her village to Brooklyn in search of a better life. Living in a rooming house under the sternly watchful eye of Miss Kelly, she meets a charming Italian plumber who’d be perfect husband material if the folks at home didn’t really have it in mind that she’s going to marry safe bet Jim (Domnhall Gleeson). Though it would be kind of a stretch to call Brooklyn Ronan’s first mature role — it’s a film about gaining maturity, after all — it does point to a significant change of direction in Ronan’s career.

“I’ve never played kid roles and I’ve never been in kid films so I never thought about it as an actor,” she explains. “Until maybe 18 or 19, up until now, really, it was tricky to showcase that you’re ready to move on to that next step and take on roles that are a little more mature. Brooklyn came along at the right time for me. I don’t know if it happens more with female actors or not, but definitely from 18 to now, a lot of people would’ve known me from something that I did when I was, like, 15. I didn’t want to rely on something I’d done so long ago, and I always want to do the work that I’m passionate about, but… I definitely needed another film for this stage that I’m in now.”

“(The experience of being in a film) becomes a lot more involved as you grow older,” says Ronan. “You’re more aware of how the machine works. I feel like my approach towards the actual work hasn’t changed that much – it’s still kind of based on instinct. I don’t work in any kind of Method way or anything like that. That’s never something I’ve done, but I am starting to understand that you change the way you work for different roles. Your life experience, you know — there’s more of it! It does come into play when you play a character — it did with Brooklyn.”

Raised in Ireland (but actually born in America) and currently living in New York, Ronan has more than a little in common with the transcontinental struggle that Eilis goes through. “Ireland… that’s where I’ll raise my kids.That’s where I’ll settle down, I reckon, and New York is a huge part of who I am. It’s where I was born – I lived there until I was three – and it very much made my parents into the people that they are. My mom, who I’m basically a clone of, is a fiercely independent woman, is very hard-working, and that really came out of her when she went to New York.

“Now I get to come over here,” she says. “It’s funny because my mom, she was very adamant about having me over here because they had been illegal. They didn’t have a visa for a few years until they got married and she said that if they were ever to come back to America, they wouldn’t want me to have to go through this. (…) The fact that I come to it as someone who comes from both places is a real gift that they gave me. They’re both home, in different ways.

“I think over here (Toronto) and in the States, like what Eilis goes through, the Irish are kind of celebrated, and it’s great. We love coming here because, you know, people like us, or whatever,” she laughs. “I’m terrible, by the way. You wouldn’t want to get to know me. But North Americans are really kind of welcoming and they love us, so I’m really enjoying being “the Irish one” here. There have been stages where I’ve been at home — not as much now because I think as you get older you just go “Okay, this is the way I am” and people either accept it or they don’t — but definitely when I was a kid, I was the outsider. Not only was I not from Ireland originally, but I wasn’t from the county that I grew up in. I always had a Dublin accent. I was sort of the black sheep.”

Brooklyn is only the second time that Ronan gets to use her natural Dublin accent and the first time her character is actually Irish, but working with Irish directors like Crowley and Neil Jordan has become a more frequent occurrence. “When Irish people get together, whether we know each other or not, we’re very familiar with each other,” she explains. “I just did a job in New York and at the end of my shoot, me and a mate went to one of the U2 gigs at Madison Square Garden. We were hanging out with everyone afterwards and their whole crew was Irish. I’d never met these people before, I’d never met Bono… and it was like we had known each other our whole lives. I don’t know if it’s because we’re a small country or we’ve all kind of had to stick together a little bit. I have found that with my directors — with Neil and John — that we’re just very straightforward with each other. It’s like your cousin or your uncle is directing you!” ■

Brooklyn comes out in theatres on Friday, Dec. 18. Watch the trailer here: