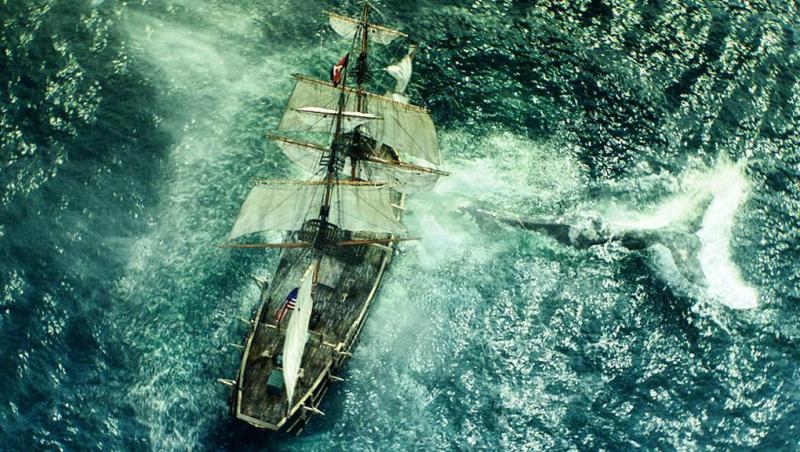 Ron Howard is old-fashioned. That doesn’t necessarily mean that Howard is a bad filmmaker, but his films are safe and, with few exceptions, could have been released at any time within the last 30 years and essentially played out the same. This beefy, middlebrow aesthetic has led to some of Howard’s best films (Apollo 13, Frost/Nixon) but has also put him in a category apart from the currents of today.

I didn’t really notice it until the film was over, but I haven’t seen a movie like In the Heart of the Sea in a long time. It’s a rousing, unpretentious and thematically unadventurous adventure movie in the conventional sense, full of spectacle and pizzazz but dangerously low on character development and narrative depth.

In the early 1820s, Nantucket-based whaler Owen Chase (Chris Hemsworth) accepts a post as the first mate aboard the Essex, a whaling ship piloted by the inexperienced child of privilege George Pollard Jr. (Benjamin Walker). Expecting to be made captain, Chase nevertheless accepts the second banana role with the promise of a gig heading up his own expedition the next time around. Joining him on the trip is his lifelong best friend Matthew (Cillian Murphy), teenage cabin boy Thomas Nickerson (Tom Holland) and a gaggle of poorly defined other beardos.

Already rather perilous due to Pollard’s lack of experience, the trip takes a turn for the worse when the ship is destroyed by an enormous, vindictive white whale, stranding the man on the ocean for over three months with little to no provisions, means of communication or hope. As the men slowly waste away on three separate boats, they experience hallucinations and eventually resort to cannibalism as their prospects of being rescued become increasingly dim.

Framed around an interview between the older version of Nickerson (played by Brendan Gleeson) and writer Herman Melville (Ben Whishaw), In the Heart of the Sea effectively functions as a sort of Moby Dick origin story. As Melville repeatedly points out, the book he’s working on is merely inspired by Nickerson’s story, as if to reassure the viewer that none of the pesky themes, narrative depth or poetry of the book will be found in the film, since those were added by Melville.

The framing story is heavy-handed and frequently corny as Nickerson downs whiskey and indulges in seafaring clichés, the worst of which is his admitting to a heinous act and claiming his wife would shudder at the thought only to reveal his wife crying in the doorway. Same thing goes for the sappy score by Roque Baños, perpetually used to underline even the most banal moments with Rousing Emotion™.

Even Hemsworth’s character is barely fleshed out beyond being blond and dashing. It’s as if any and all notes for the character simply said “SEE: PETER O’TOOLE.” Despite all the hardships that Chase and the other characters endure, it’s sort of hard to relate to the plight of such thinly drawn characters, for whom being marooned at sea mostly means a sharp downturn of roguish rapscallionery. The way the film distances itself from Moby Dick also robs it of much of its subtext; the whale is moved from metaphorical to pure plot device, which further clouds the motivations of any of the characters. When Chase becomes obsessed with killing the whale that has altered the course of his life in such a dramatic way, it’s for a purely pragmatic purpose. Of course, as mentioned previously, he was only inspired by this story, but it’s kind of like making an old-timey version of Superbad and calling it the origin story of The Great Gatsby. 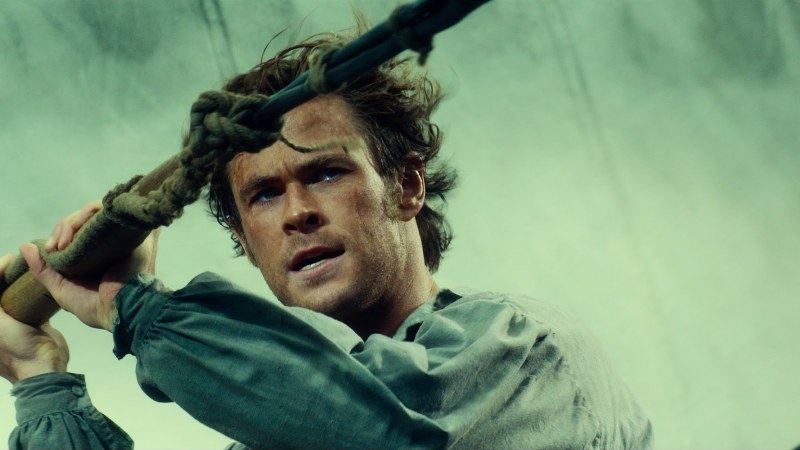 What In the Heart of the Sea lacks in substance and subtext it makes up for with sheer spectacle. Never what I’d call a flashy visual stylist, Howard and cinematographer Anthony Dod Mantle nevertheless pull out all the stops here. It’s one of the rare films I’ve seen that actually exploits 3D as a narrative tool rather than a showy gimmick (come to think of it, one of the others was Dredd, also shot by Mantle). While the film does its fair share of strapping cameras to sails and oars and whipping them around or having blood and water splash onto the lens, it also uses 3D to heighten the hallucinatory and hopeless nature of the second half of the film. As the men become increasingly beaten down by sun and starvation, the film becomes blurry and disorienting, using depth of field trickery and slightly-off backgrounds to heighten the despair of the situation. It’s rare that 3D increases the verisimilitude of a film — usually it just means some shit comes flying at you with some regularity — but In the Heart of the Sea actually pulls it off.

In the Heart of the Sea is a decent time at the movies in the most old-fashioned way: a paper-thin script all about the enormity of its sets, the intensity of its setpieces and the glint in the eye of its impossibly handsome blond star as he jumps down from the ship’s mast commandingly. It’s extremely unmemorable, certainly, but it’s fun while it lasts. ■

In the Heart of the Sea opens in theatres on Friday, Dec. 11. Watch the trailer here: