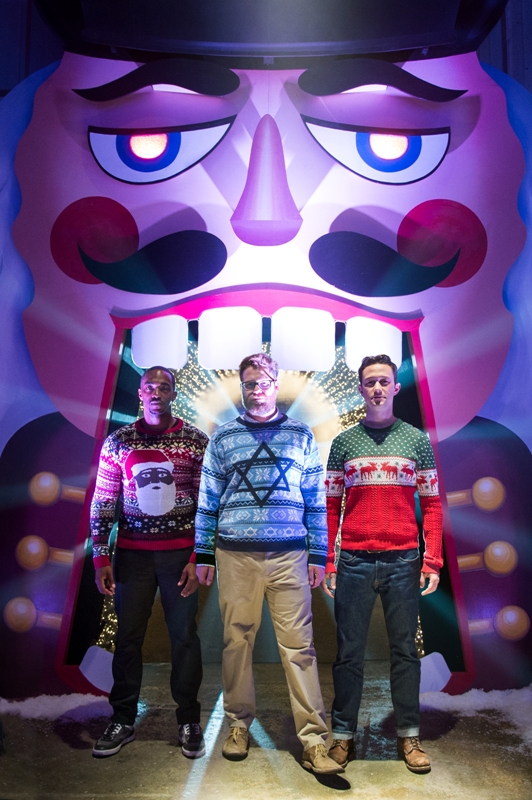 As someone who was born on Dec. 25, I have a vested interest in exorcising the grinch that lives inside of me. Birthdays are infinitely better if you enjoy them, which goes against the general mania that surrounds the holiday season. Movies are pretty much the number one delivery system of Christmas cheer and merriment in most homes, so it helps if they’re not completely terrible. Even though I am entirely of the opinion that there could probably never be another Christmas movie released as long as I live and we’d still do okay as a species, I have to admit that a non-terrible-sounding Christmas movie excites me more than most things. This may be what I’m stuck watching every year until I die as I’m reminded that I’m a year closer to death. Who wouldn’t root for that movie?

Add to that the fact that I have a love for Seth Rogen and his buds that somewhat transcends critical perspective — I even liked The Green Hornet, for fuck’s sake. I may not be fully impartial when I say that The Night Before would have had to have been extremely terrible for me to not be excited about it. And sure enough, it delivers a ton of the raunchy, shroom-fuelled hijinx, old-school hip hop references and dick jokes that you’ve come to expect from this crew (which, to be clear, really only refers to Rogen and producing partner Evan Goldberg — the rest of the usual suspects are nowhere to be found) while still more-or-less adhering to the credo of mirth-delivering that one expects from Rogen and co. It’s even, dare I say, a slightly more mature film than I expected: if it is essentially centered around manchildren, it does also purport the idea that 33-year-old manchildren should really hang it up.

Ever since his parents died on Christmas Eve, slacker musician Ethan (Joseph Gordon-Levitt) has relied on his friends Isaac (Rogen) and Chris (Anthony Mackie) to celebrate Christmas. Their booze-soaked tradition has been the same for 14 years, but life has begun to take over: Isaac, a lawyer, is awaiting his first child with his wife Betsy (Jillian Bell) and Chris has found fame and fortune as a late-blooming football superstar. The three friends decide that, with the impending birth of Isaac’s child, this Christmas will be their last blow-out — a decision that proves worthwhile when Ethan lands tickets to their white whale, the mysterious Nutcracker Ball.

What ensues is a rollicking into-the-night comedy that sees the three pals crossing paths with a saintly drug dealer (Michael Shannon), a grinchy would-be supervillain (Ilana Glazer), Ethan’s ex-girlfriend Diana (Lizzy Caplan), a couple of drunk Santas and some surprises I wouldn’t dare spoil. Rogen’s character spends the entirety of the movie getting progressively higher and out of control thanks to a gift basket of drugs handed to him by his wife as one last hurrah, but Mackie and Gordon-Levitt spend the film under much less impaired circumstances.

The Night Before isn’t exactly a mature film (I struggle to think of any conceivable movie narrated by Tracy Morgan that would ever qualify as such) but it does show some incremental maturity compared with even the film that Rogen, Gordon-Levitt and director Jonathan Levine made together, 50/50. Like nearly everything in Rogen’s body of work, The Night Before is about leaving childish things behind and stepping up to the adult plate; unlike many previous films, however, The Night Before makes no qualms about how overdue this change in.

If I were perfectly honest, I’d say that the Rogen-centric bromance genre is getting long in the tooth. There’s almost nowhere they haven’t stuck their dicks, nothing they haven’t jammed up their noses and no ironic pop cultural celebrity they haven’t had a chance encounter with at this point, but The Night Before seems to suggest that it, too, functions as a sort of final chapter. It’s a hilarious movie, to be sure — I enjoyed it tremendously, but there’s definitely a feeling of déjà-vu to the proceedings.

But if I’m going to be semi-stuck watching something on my birthday until the end of time, I’m glad it’s this. Twelve years of watching Bad Santa has taken its toll. ■

The Night Before opens in theatres on Friday, Nov. 20. Watch the trailer here: