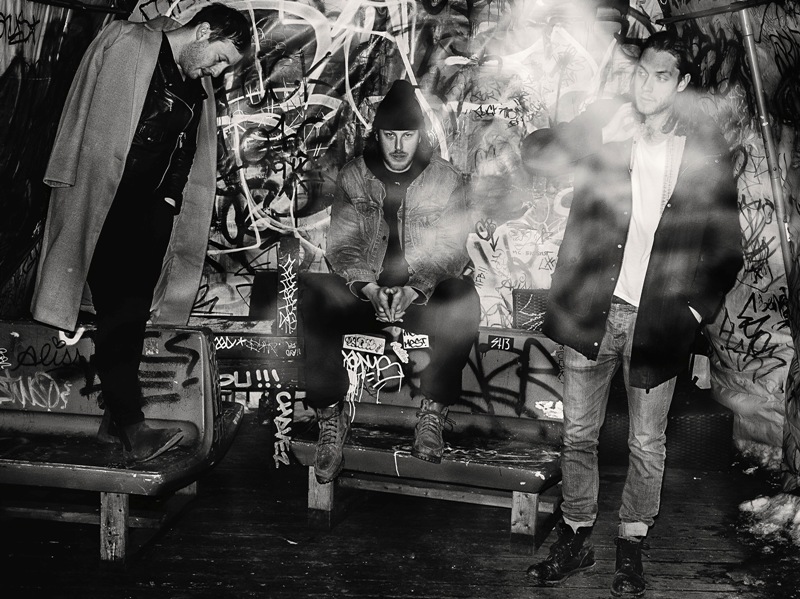 Whatever your mother tongue, in the language of skilled, stylistic hip hop, Loud Lary Ajust are a group any rap fan should be able to understand and appreciate at a aesthetic level. When their 2012 debut Gullywood dropped inauspiciously in spring of that year, franglais rap had yet to become a “thing”, and the band (MCs Loud and Lary and producer/DJ Ajust) were simply doing what they felt.

Three years later, and on the heels of unpredicted success in Quebec with their subsequent Ô Mon Dieu EP and a proper label release in the form of 2014’s critically adored Blue Volvo, that’s still the LLA MO, and it’s only getting bigger and badder. A brand new track, “Jour 1” is a good indicator.

The band culminate a year of touring and sell-out shows (including a triumphant hometown stop at Club Soda last April) with the final chapter in the Blue Volvo promo run, a headlining Metropolis show in tandem with M for Montreal, matching the grandeur of their success thus far.

We spoke to Simon “Loud” Cliche for some perspective on the group’s growth, in Cult MTL‘s first formal interview with Loud Lary Ajust.

The best part is the shows. The tours really became much bigger than what it was before Blue Volvo. Our fanbase really changed, and expanded. Younger people, sold out venues in towns where we had no support before. We thought we really had something with Gullywood and O Mon Dieu, that came after, and sometimes we didn’t know…like, we thought we peaked, because franglais (would) never reach the whole province.

But with Blue Volvo, and (the strength) of a few songs, we really expanded in terms of what we can do at the shows. It really became our job this year, that’s for sure. None of us have side jobs now, we all quit our day jobs. But it’s a risk. We’re not made. If it doesn’t work another year, like, we gotta go back to work.

We were definitly surprised when (Gullywood) worked that well. Of course, we tried to make it like that, we had a huge plan. At the same time there was no point of reference for whether or not it would work. So relatively, it blew up, and for us at the time it was a major change. We weren’t prepared for that, but we rode with it.

What I heard (when we first met) in his beats was what I was trying to do with my verses. He had, clearly, that ’90s touch, all these elements from the classics. It didn’t sound how it sounds right now, but he was building different samples, different sounds and making something new. He had the perfect balance (between) a classic sound and a new style, with new influences.

ON THE RAP KEB MOVEMENT

I don’t think we realized at first that there was this movement. For us at first, it was only Alaclair Ensemble that we really looked up to that came from here. So when we had our breakthrough I don’t think we really felt that there was something happening that was bigger than our thing. But many people were starting to blow up at the same time. It took about a year to realize it was happening (beyond) us, at a larger scale.

I think us, and defintely Dead Obies and Alaclair, we all try to market things in a very different way than the rest of the industry. That was a very big deal when we signed our record deal (with Audiogram). The label was interested in working with artists like us, working in non-traditional ways. I’m not sure how much the industry is learning from us — but it should be!

In the record industry, things just take a long time. Maybe they absorb things (from the bands), but also, there are probably things they know that we don’t. So we try to do things our way, and they do things in the traditional way, and we try to max it all out.

Being able to quit my job has been better for the creative process, because if we were able to do (what we did) while we did hold jobs, imagine what it can be when we are entirely devoted to the music.

When trends die, we don’t die with them. The whole piu piu thing was hot for a minute, and now nobody ever talks about it, or claims to be a piu piu artist. If you go all in with a title, you can die with the trend.

We don’t really listen that much to what people do here — not to the point that we are influenced by them. We see what works, and what doesn’t, but it will always be unique, and people respond to that. Even though we’re part of the movement, we are not part of a wave, stylistically.

We’re doing a much longer show, and we’re doing a few new songs, because we’re working on a new EP right now that’s gonna come out in early 2016. So we’re gonna do three or four new songs. And production-wise, (the live show) for Metropolis, everything is bigger. It’s a whole different step. ■

Loud Lary Ajust play as part of the M for Montreal with opening acts Jazz Cartier, Eman & VLooper and Bizarh at Metropolis (59 Ste-Catherine E.) on Friday, Nov.20, 7 p.m. Tickets start at $23 plus tax and service, with VIP packages available