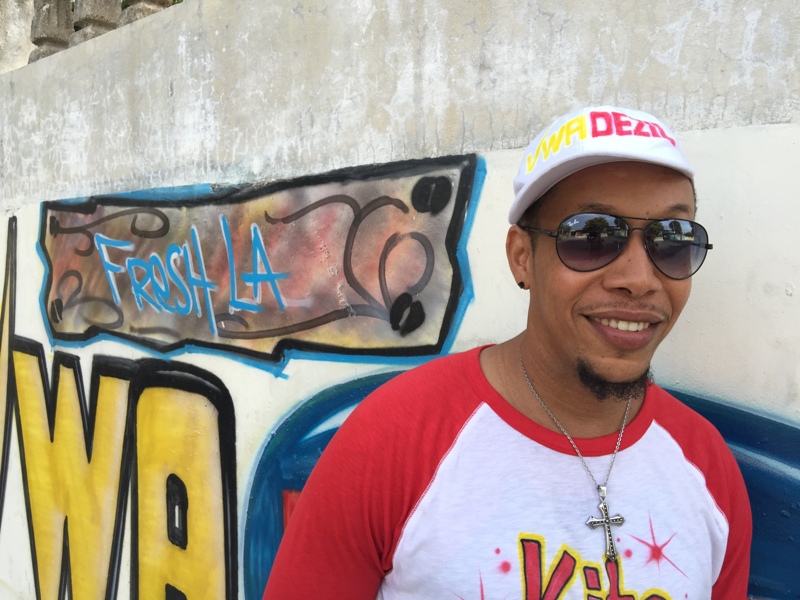 Interrupt This Program is a series of half-hour documentaries dedicated to showcasing underground culture in troubled parts of the world. As the CBC show’s tagline reads, “Cities under pressure. Artists fighting back.”

Montrealer Nabil Mehchi, who co-created the series with Frank Fiorito, explains that the idea for the show came from the kind of questions that friends would ask every time he went to visit his family in Beirut.

“‘What’s it like there? It must be crazy!’ They have such a clear stereotypical vision of Beirut being this war-torn no man’s land, but every time I go back I learn more about the underground art scene. They have a thriving nightlife, a great music scene, theatre, dance, everything. So we started thinking that there must be other cities like this around the world.”

Logically the duo launched the series with an episode about Beirut, later travelling to Kiev and Port au Prince, profiling a few artists in tight, half-hour segments that feel (Mehchi admits) a little Vice-ey. The latest episode, focusing on Haitian artists Fresh LA, Princess Eud and Josué, airs on CBC tonight, and the team is waiting for the green light from the network to continue production in the new year. Among the cities on their shortlist are Tehran, Caracas and Athens.

“Our mandate is to cover cities that have gone through some serious trauma, either long-term war, social and economic upheaval, an economic crash, but they have to be a bit on the mend, like Kiev. There’s still war in Ukraine but the Maidan revolution happened two years ago, and that was a game-changer for them.

“They also have to be cities where artists are playing a very important role in bringing up issues that nobody wants to talk about, whether it’s women’s rights, LGBT rights or just basic human rights, as well as freedom of speech and freedom of expression. So the art had to be a form of protest, an agent of change and a means of survival.”

Danger, Mehchi says, is inherent in these productions, and while obtaining insurance is a requirement for their team to even consider travelling to the city in question, it provides no real protection. Apart from putting themselves and their crew at risk, Fiorito and Mehchi also have to consider the safety of their subjects

“For us as Canadians it’s not dangerous ’cause if anything happens we can go to our embassy, but these artists are putting themselves in danger all the time just by speaking their minds.

“Port au Prince was one of the most dangerous cities we’ve been to. When we get to these cities, the danger is more palpable for us than it is for the people living there because it’s become part of their everyday reality, so they tend to play it down. By the second day you start to feel like them, you’re more willing to take risks. You’re kind of motivated by their courage.”

As in previous episodes, one of the subjects is a Canadian who has settled in the city, in this case freelance journalist Étienne Côté-Paluck.

“The idea behind this was to try to find some way for Canadians to relate,” Mehchi explains, “but we didn’t want people who were expats or tourists in that place, we wanted people who are totally immersed in the culture.”

Côté-Paluck is a sound choice, having worked in Haiti on and off since 2004 and become fluent in Creole in 2008, two years before he moved to the town of Jacmel. Montrealers may remember him as a music writer for Voir and La Presse, as well as a cultural correspondent for Radio-Canada — it was via that gig that he wound up being part of the first TV crew on the ground in Haiti after the devastating earthquake in 2010.

Having immersed himself in the culture, Côté-Paluck sees himself as an intermediary between Haitians and newly arrived volunteers and ex-pats who typically segregate themselves from the locals. Having had a Haitian connection prior to the earthquake, in the form of old family friends and mentors (two of whom died during the disaster), there was a sentimental reason for becoming part of the recovery process.

“I wanted to be there to see what was going to happen, and I wanted to stay there to make sure that the way the media was portraying Haiti was okay. It was a mission I gave myself.”

As a music lover and occasional radio DJ, the vibrancy of Haitian culture is also a major part of Côté-Paluck’s decision to stay.

“Culture is at the centre of society there, and music is everywhere! In every context, you will hear music. And you’re always surprised by something, which is really fun. There’s never a dull day.”

As Mehchi explains, inserting Canadians into every episode of Interrupt This Program not only bridges a culture gap for viewers, but opens up the possibility of living the experience.

“It’s a way to say we’re much closer to these cultures than we think we are. In the Beirut episode, you have this 23-year-old woman from Vancouver living in the middle of Beirut running around helping Syrian refugees. You feel like, ‘Wow, what an incredible person,’ but also, ‘I could do that, too.'” ■

Interrupt This Program airs tonight on CBC at 8:30 p.m.

Watch the Beirut and Kiev episodes on the show’s website, here.