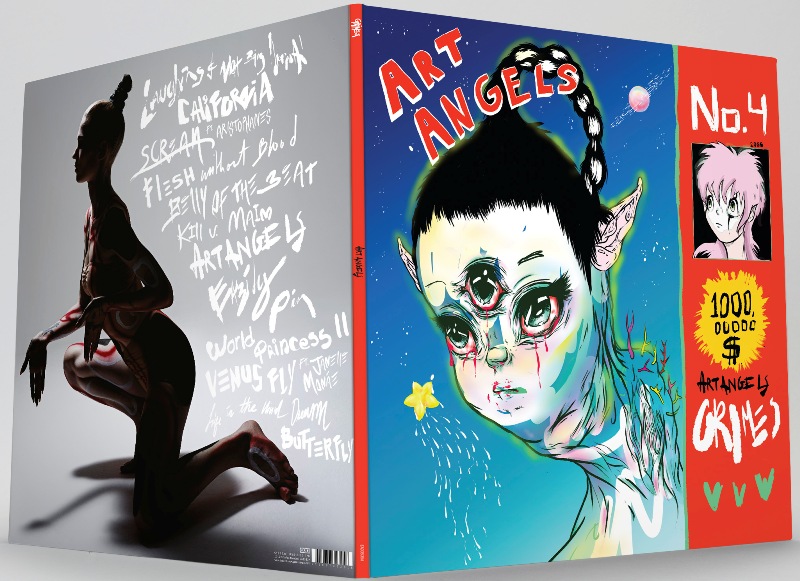 On the second track of Art Angels, Grimes sings “California, you only like me when you think I’m looking sad.” It’s safe to assume at this point we’re not at Lab Synthèse anymore.

The indie pop star’s previous releases, including breakthrough album Visions, were made here. As the story goes, Claire Boucher’s landmark 2012 release was the product of being holed up solo in her Parc Avenue apartment with a bevy of stimulants. Her early works reflected the ramshackle times of her and the Arbutus label, only things moved at lightning speeds post-Vanessa: out of the Lab and onto legendary imprint 4AD in no time flat.

That same, frigid apartment where she worked on music eventually contributed to her relocating to sunny Los Angeles, where there’s no risk of getting frostbite indoors, and Art Angels is her first album to reflect her former Montrealer status. (It’s her first to not be released on Arbutus in Canada.) There’s a certain simplicity to her laptop productions on Visions that barely registers on the scattershot and ambitious Art Angels, a would-be perfect pop album if Grimes had let it go down that path. She still has a little loft space in her yet, so Art Angels, which uses live instrumentation and seemingly took a couple of years to finish, is maybe a little too weird to appeal to the broadest of pop audiences. (The opening track is actually called “Laughing and Not Being Normal.”)

Really, the only missteps — the chintzy Interpol guitar on single “Flesh Without Blood” and the aimless/harmless experiment “Scream” — were bits we’ve heard already. There’s a lot of conventional pop here, like the aforementioned “California,” Janelle Monae duet “Venus Fly” and closer “Butterfly.” In that realm, Grimes sounds natural: her vocals have never sounded clearer (I’ll jokingly suggest she’s singing LARP love songs) and there’s an effervescence that never goes flat. She still knows how to build from the beat outwards, and Art Angels keeps a furious pace that anchors the chaos surrounding the rest of her compositions. The Tinkerbell-meets-New Jack Swing vocal hooks — intelligible or otherwise — remain effortlessly infectious. These skills were readily apparent on Visions, and they’ve been given an injection of nitrous oxide on Art Angels. The overloaded Anime melee that is “Kill v. Maim” is the song on the album with the most immediate pull.

It might be an issue of consternation for the fans who convinced her to put it on the record in the first place, but the new version “Realiti” found here, with crisper vocals and a more elaborate outro, is a better fit with the other songs compared to the charming demo. Either way you slice it, it’s one of her best songs, and perhaps the most quintessentially Grimes tune to date. As glossed up as Art Angels sounds, Grimes seems to be sticking to a DIY ethos, if the self-directed Flesh Without Blood video is any indication. Pop stars tend to delegate, so she hasn’t quite joined those ranks just yet. Maybe she will at some point, or perhaps she’ll continue to operate somewhere in-between untethered lone wolf and full-Roc Nation. It’s a tricky balance.

Artists leaving Canada for the U.S. is nothing new — as Radio Free Canuckistan’s Michael Barclay observed Grimes is following in the footsteps of Joni Mitchell and Neil Young — so while it’s sad that Grimes has moved beyond the local afterparty circuit, it’s no surprise she has found a much larger audience beyond Mile End’s borders. It was another erstwhile Montrealer and afterparty dweller, Eubene Sa, who told me Grimes’ music is largely just K-Pop for the West. It’s true, and it suggests her music was always destined to travel. Although hearing Grimes sing about the time-honoured love-hate relationship that comes with living in the Golden State might be bittersweet for those from her former base of operations, it’s equally reassuring that Art Angels isn’t a total departure. ■