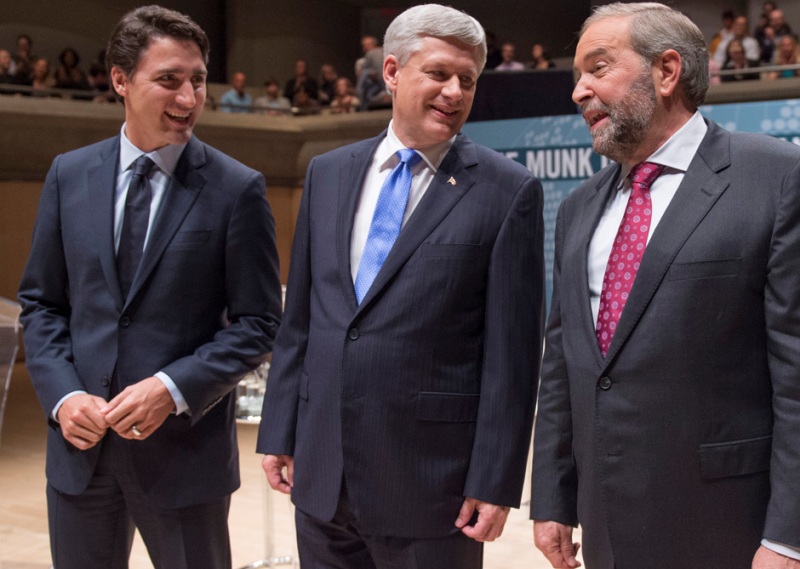 It’s pretty ironic that while Justin Trudeau was accusing NDP leader Thomas Mulcair of speaking out of both sides of his mouth on the Energy East pipeline issue, one of Trudeau’s closest advisors was secretly writing to the pipeline promoter, providing inside information about the likely size of a Liberal cabinet and which key ministers they should target for lobbying.

Poll after poll has show Canadians desperately want to see change in Ottawa, but one leaked email has shown that, under Trudeau’s Liberals, it would be business as usual if they win the most seats on Monday.

While Canadians were lined up for the last day of advanced polling Monday, Daniel Gagnier, co-chair of the Liberal campaign, was sending an email to TransCanada Corp. offering his advice on how to get their priorities — including the controversial Energy East pipeline — onto the agenda of a new government.

When the news leaked, Liberal officials initially backed Gagnier, a man who has slipped in and out of the backrooms of politics and boardrooms of businesses for more than four decades, including stints as chief of staff for former Ontario premier David Peterson as well as former Quebec premier Jean Charest, not to mention advising Jean Chrétien, Paul Martin, Brian Mulroney and, yes, Stephen Harper.

Hours later, though, Gagnier resigned as co-chair, saying he didn’t want to “distract” from the Trudeau campaign.

Gagnier was a Quebec organizer in Trudeau’s bid to lead the Liberal Party and has acted as a lobbyist for the Energy Policy Institute of Canada. Although he is not currently registered as a lobbyist, while working in the Liberal war room, Gagnier wrote TransCanada to suggest, among other things, that they gear up for an imminent lobby campaign  “as federal leadership and a discussion with premiers will take place early. This is where we can play and help them get things right.”

Gagnier was no doubt on the short list for a key job in a Trudeau government — chief of staff wouldn’t be surprising — so he was in essence advising a major energy player how to best influence a government in which he would likely play a critical role. It’s not unlike the quarterback coach of the Alouettes telling the coach of the Lions how to best penetrate the Als’ offensive line.

Gagnier is a symptom of a political system in which both the Liberals and Conservatives have turned the Nation’s Business into the Businesses’ Nation.

“He represents the same old Liberal Party that brought you the sponsorship scandal …. A party run by elite insiders who sell their influence to the highest bidder to the detriment of taxpayers.”

As if the Tories haven’t sold the nation’s soul to big business through massive tax reductions that were supposed to boost employment but ended up sitting unspent in corporate accounts and offshore tax havens. These cash reserves, or “dead money,” represented just 10 per cent of Canada’s Gross Domestic Product in the 1990s, but had jumped to more than $630-billion in 2013 — 30 per cent of GDP — under the Harper government. In that same period, under both governing parties, corporate tax rates shrank from 42 to 26 per cent, placing a rapidly ballooning share of federal expenses on the shoulders of individual taxpayers.

That’s you and me. And unlike corporations, we haven’t had any tax windfalls to stuff our mattresses with. Instead, we are borrowing more than ever — household debt-to-income ratios have risen to a record high of 165 per cent. We now spend, on average, a whopping 14 per cent of our income — that’s the first five hours of a 35-hour week — simply servicing that debt. That’s despite a drop in interest rates since 1990 from 14 per cent to less than one per cent.

Tom Mulcair’s NDP hasn’t done much to distinguish itself from the Tories when it comes to issues of taxation. In an attempt to break away from the stereotype of spendthrift, high-taxation social-democratic governments, Mulcair has even promised a balanced budget. Meanwhile, Trudeau champions a more traditional Keynesian approach, boosting infrastructure spending to kickstart the employment that Harper’s corporate buddies failed miserably to deliver despite their lavish tax breaks.

Former prime minister W.L. Mackenzie King once said that social democrats were “liberals in a hurry,” but today’s NDP, hoping to climb to power by moving closer to the middle, are seemingly being lapped by Trudeau on issues from spending to marijuana reform. While the small-c conservative strategy initially seemed to be paying off for Mulcair, like the fable of the tortoise and the hare, the long 78-day election race has seen the Liberals reverse positions with the formerly front-running NDP.

For those of us who want Harper out at all costs, the concept of strategic voting may have its attractions. In fact, there are at least five groups out there actively working to identify ridings where they can shift anti-Harper votes to a leading Liberal or NDP candidate to help ensure the local Tory loses.

But the Tories are so far behind in Montreal ridings that strategic voting is virtually pointless here. In theory, that means there’s no reason not to vote with your heart, whether that’s the NDP, Liberals, Greens, the Bloc or none of the above.

In reality, however, Montrealers will play a critical role in helping determine the balance of power in what will almost certainly be a minority government. So while the choice of which government we DON’T want may be clear, the choice of which party we want to lead the post-Harper era, for many voters, is not.

Do you vote for a seemingly left-leaning Liberal Party that, behind the scenes, is courting big business just as hard as the Tories ever did? Or do you support an NDP that sounds more like Hillary Clinton than Bernie Sanders?

Actions, they say, speak louder than words. We’ve seen the Liberals in action many times. If we’re going to elect a minority government, let’s pass the baton to the party that’s least likely to pass it right back to the energy giants and the banks.

Trudeau Liberals have run this country for way too many years, and incidents like the Gagnier email show they haven’t changed much under Trudeau fils.

It’s time to give the NDP a chance to lead the way, and a minority government scenario is the ideal opportunity to do so. ■

Please note that the opinions expressed in this column are that of the columnist and not of Cult MTL. Cult MTL Media Inc. does not endorse political parties.