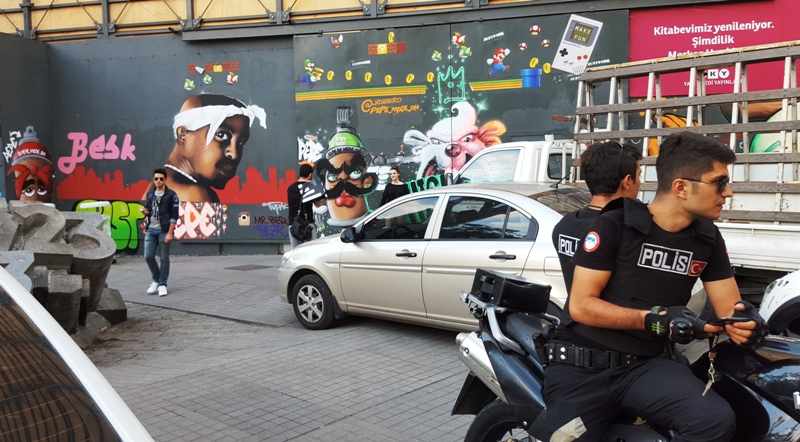 Tupac murals and Turkish cops at the mouth of the Tunnel

Turkey isn’t a country I ever thought I’d visit. Over the years I’ve heard lots of good things about Istanbul, enough to accumulate a good impression of the “city of contrasts,” as the cliché goes. But still, I never pictured myself there, perhaps because of the sheer distance. When I heard that there were direct flights to Istanbul from Montreal, and (just over a year later) that Turkish Airlines was organizing a press trip for Montreal reporters, a six-day Turkish odyssey quickly became a reality.

Of course two of those six days (Sept. 13-18) were largely spent in transit. The trip was courtesy of Turkish Airlines, who put us in business class, something I have most definitely never experienced — I’ve literally been outside the plane (long story) but have only spied glimpses of first/business class through a curtain, probably while saying “Those dicks” under my breath. The food and free booze were top-tier, as were the in-flight entertainment and flattening seats, which made sleeping during the nine-hour flight pretty easy. There’s literally a lights-out after the lengthy meal service, and each passenger is provided with an eye-mask, earplugs and socks to really knock you out. 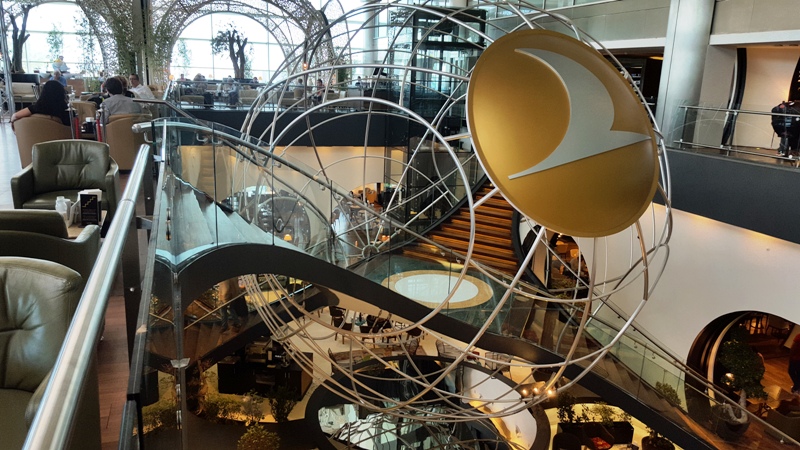 The Turkish Airlines Lounge in Istanbul

At Trudeau airport, business-class ticket holders have access to the Star Alliance lounge (where’s there’s more free food and booze), but in Istanbul, it really pays to get to arrive at Atatürk airport early to experience the Turkish Airlines Lounge: Its spacious two storeys feature a movie theatre, driving range (as in golf), a spa, eight hotel rooms, hot and cold food and beverages and beautiful decor. Business-class tickets are twice as expensive as economy with Turkish Airlines, but that’s still better than the average airline mark-up, and what you get in return eases a lot of the stress and fatigue that comes with travelling.

Istanbul is an international city in a way that no North American metropolis can ever be. Its ethnic and cultural diversity runs thousands of years deep — you can see it in the range of architecture, from Roman and Ottoman relics to designer shops and five-star hotels. The economic disparity of its 17 million people is apparent, from the rich populace whose boats are parked behind luxury homes on the Bosphorus strait, to the average citizen who earns 891 Turkish lira a month (about $442 Canadian) to the recent influx of 320,000 Syrian refugees, who we occasionally spotted in the streets hauling massive garbage bins. 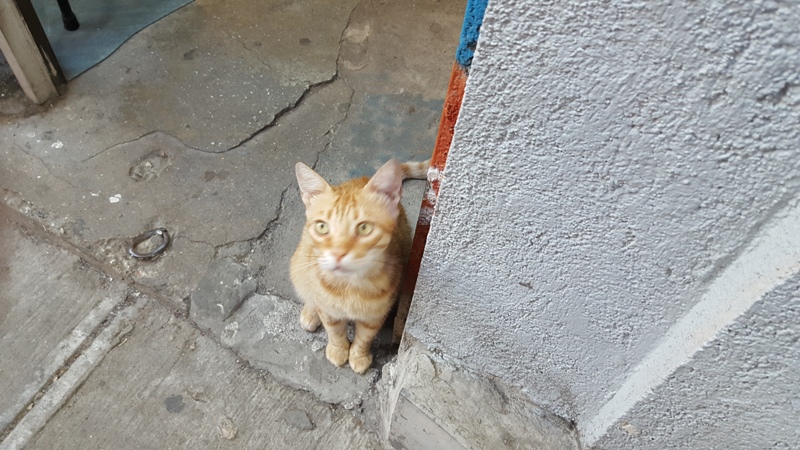 Istanbul is tucked into the northwestern corner of Turkey, between the Black and Aegean seas. Minor fighting between the Turkish army and Kurdish militants was erupting the day before we left Montreal, but at the opposite end of the country, and over 1,000 kilometres from the nearest bona fide war zone (Syria). Terrorism is a major concern in Istanbul as it is throughout the country, and throughout the region — it was unsettling that Turkey had just recently become involved in bombing ISIS prior to this trip, but what can you do? The only police I saw who weren’t traffic cops looked pretty chill (and strangely young), but overall security is very tight, and there’s some comfort in that — there were metal detectors in malls, and carry-on luggage is scanned three times on the way out of the country.

The city is like a gateway to the Middle East, and — for me — an introduction to the Islamic world, where you’ll often hear the call to prayer from loudspeakers in the streets, just like you still hear church bells in Montreal (despite this being a supposedly secular society). In 2000, there were 2,691 active mosques in Istanbul, and only 123 churches and 20 synagogues. Yet women can wear whatever they like in the streets, only having to cover up when visiting a mosque. Ironically there appeared to be an unwritten restriction on men: no shorts, despite the scalding heat.

During an unintentional tour of the city by taxi, we saw dozens of cows and sheep that were soon to be slaughtered as part of the hajj, the Islamic pilgrimage to Mecca. Adding to the chaos of the roads in a place where creative driving and disregard for speed limits are the norm, the penned animals were right next to highways and busy city streets (where, incidentally, thousands of wild cats and dogs scavenge from homes and restaurants daily). But political turmoil, fear of terrorism and, ahem, so-called “barbaric cultural practices” aren’t rational deterrents from visiting the city.

We took a boat tour of the Bosphorus, which divides Istanbul between its European and Asian sides — it’s the only city in the world that encompasses two continents. We never got to the Asian side, a more residential area where there are far fewer tourist attractions, but on the other side, traces of European culture are commonplace, from the baroque and rococo architecture and café scene to the Greek elements of its Mediterranean cuisine. Clearly geography and history make Istanbul far more Western than superficially similar cities like Cairo and Beirut. 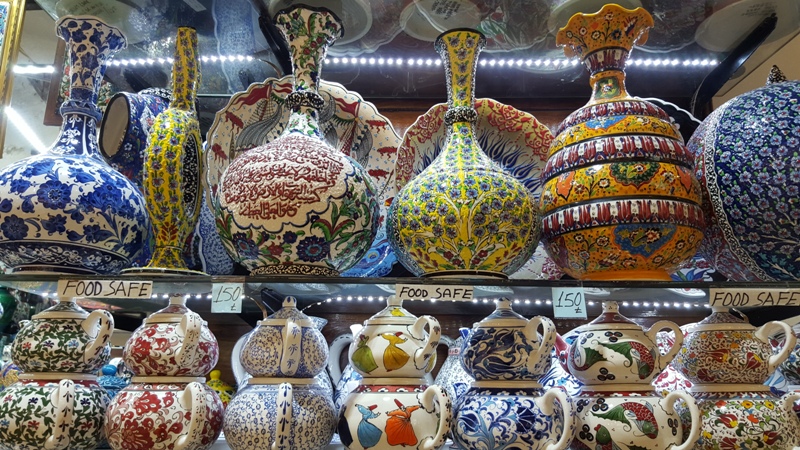 From a distance, looking at the way the city was constructed brought the buzzing bedlam of Manhattan to mind, with its jumble of brick and mortar built on top of 19th century tenements. And although the grand bazaar, spice bazaar and adjacent open-air market had some of that traditional Middle Eastern marketplace ambiance — with vendors hocking carpets, lamps, jewellery, evil eye pendants and Turkish delight candy — they were also dotted with the tacky tourist junk and acres of designer knock-offs you’d find on Canal Street in New York City. Though we didn’t buy anything, the colours and the excitement in the sea of people we were moving with make the bazaar an essential Istanbul experience.

The area around Taksim Square is a less intense but still bustling commercial quarter typical of any old, massive metropolis, and at the end of its pedestrian street, Istiklal, is a narrow bohemian stretch of cool galleries, music shops, cafés and graffiti art-covered walls called the Tunnel, Istanbul’s answer to the Lower East Side or Williamsburg. This is another must-see spot, one that I’d go back to spend a day exploring.

A STEP INTO HISTORY

In the heart of the old city are the twin holy sites of the Blue Mosque and the Hagia Sophia, a Christian cathedral turned mosque turned museum — a scene in the 1962 James Bond movie From Russia With Love was shot inside the grand structure, where paintings of Jesus and the angel Gabriel sit alongside roundels bearing the names of Mohammed and Allah. 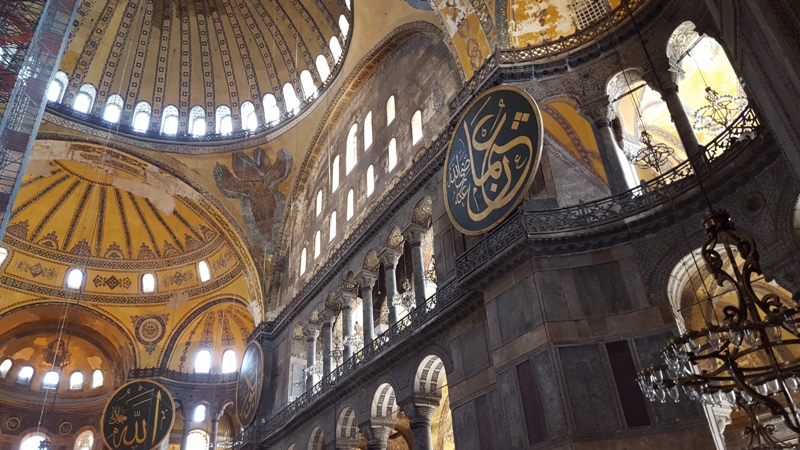 We also saw the hippodrome, the site where Romans used to race horses, and the various statues and monuments in the centre of what was once the track, which date back to the Roman, Ottoman and Turkish periods. Even more impressive was the Basilica Cistern, built in the Byzantine era (sixth century) as the underground water filtration system for the Great Palace of Constantinople. It was a cool, dimly lit room with rows of columns and mysterious medusa head statues (the mystery being why they were placed upside down and sideways at the base of columns).

In terms of iconography, the most ubiquitous face that we saw commemorated in historical sites and gathering places around the city (including the airport) was that of Mustafa Kemal Atatürk, the first president of the Republic of Turkey following the overthrow of the last sultan in 1923. As our tour guide explained, it hasn’t even been a century since Turks were walking around in fezzes and genie pants, and Atatürk and his government are credited with bringing the country into the 20th century, from superficial dress to reforms in education, taxation and the democratic process.

EATING OUT AND DRINKING UP

A glance at any country’s McDonald’s menu usually reveals its most mainstream food item, and in Turkey’s case it’s kofta, the Turkish meatball, which has similar variants in neighbouring countries. I don’t eat red meat but was told by my fellow travellers that the koftas they tried were either deliciously chewy and well-spiced or a bit gritty and bland, depending on where they ate. There seemed to be consensus that the best meatball spot we went to was Sultanahmet Koftecisi. (No one in our group tried the McKofte, which is probably just as well.) 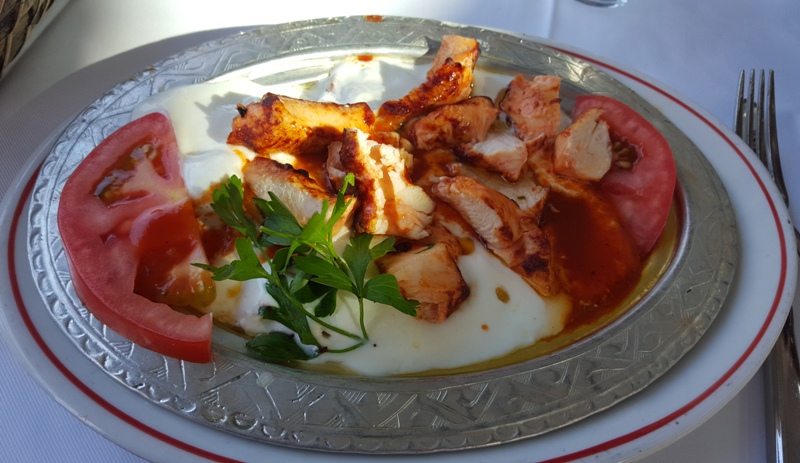 The cold mezzes we ordered at the glitzy Reina supperclub share a lot with the standard Lebanese appetizer spread, with some elements of Greek cuisine — feta and similar cheeses, as well as yogurt, are typical mezze and buffet items. Turkish hummus is a made a little dry by comparison to the Lebanese variety that we’re used to, but abagannuc (pronounced like baba ganoush without the “b”) is far superior, perhaps because there’s a creamy, tart cheese mixed into it. (There’s some contention regarding what abagannuc is, based on my recent experience at Marché Istanbul here in Montreal — the proprietor told us it’s actually a marinated eggplant salad without a trace of cream, available in jars. But what we had at Reina was so good, we’re not done searching Montreal for it.)

Following such starters, of course, were grilled chicken, beef and lamb kebabs, which you naturally wash down with ice-cold raki, the national anise liquor of choice. Turkish wines and beers are widely available, too, and drinking local is wise for two reasons: it’s significantly cheaper than imports, and Turkish booze is pretty scarce at the SAQ.

Being on the water, Istanbul has its share of seafood restaurants — we ate at the elegant Kasibeyaz restaurant, right next door to one of the airport’s runways — but fish is not generally a menu staple the way it is here. Fast food and street food is all about doner wraps, koftas, grilled corn on the cob and simit, which is the Turkish bagel: it’s bigger and crispier on the outside than the Montreal variety, but still covered in a familiar coating of sesame seeds. 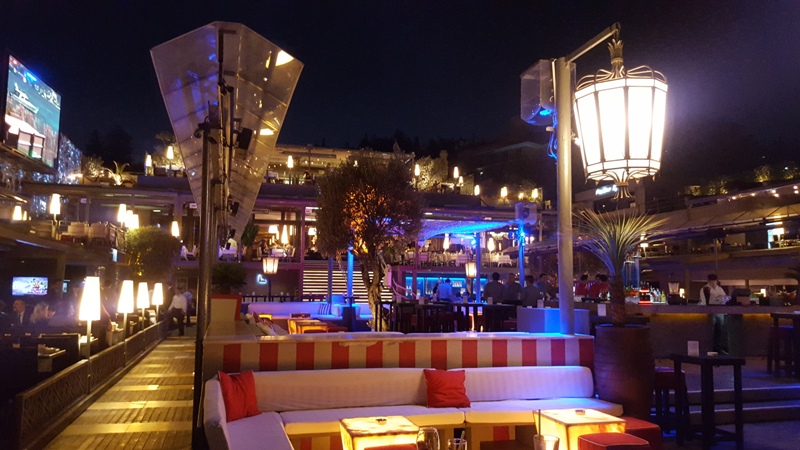 The bars and clubs we wound up at were fairly fancy but still affordable — the currency conversion puts Canadians at an advantage, even with the decline of our dollar. The view at Reina was awesome, being steps away from the Bosphorous strait and towering bridge, but aside from Reina and the street-side St. Regis Hotel bar, the other nightlife spots we visited had beautiful views from above the city. Frankie is a small showbar with a terrasse on the roof of the Sofa Hotel, and Ulus 29 is a supperclub on a hill in Bebek, which was described as the Outremont of Istanbul (but with the occasional wild dog).

Ulus 29 was our final destination in Istanbul the night prior to our return home. As we sipped wine and caesars and snacked on cheese pastries and soups — alongside people whose drivers were waiting for them outside — we processed  all the sights we’d seen that day alone: farm animals and spices and medusa heads and jewellery and underground water reserves and art gallery cats and zig-zagging streets and the bus that came a little too close to our taxi. It was a whirlwind, but there’s no way that three days in a city like Istanbul wouldn’t be. There’s no experience like it. ■