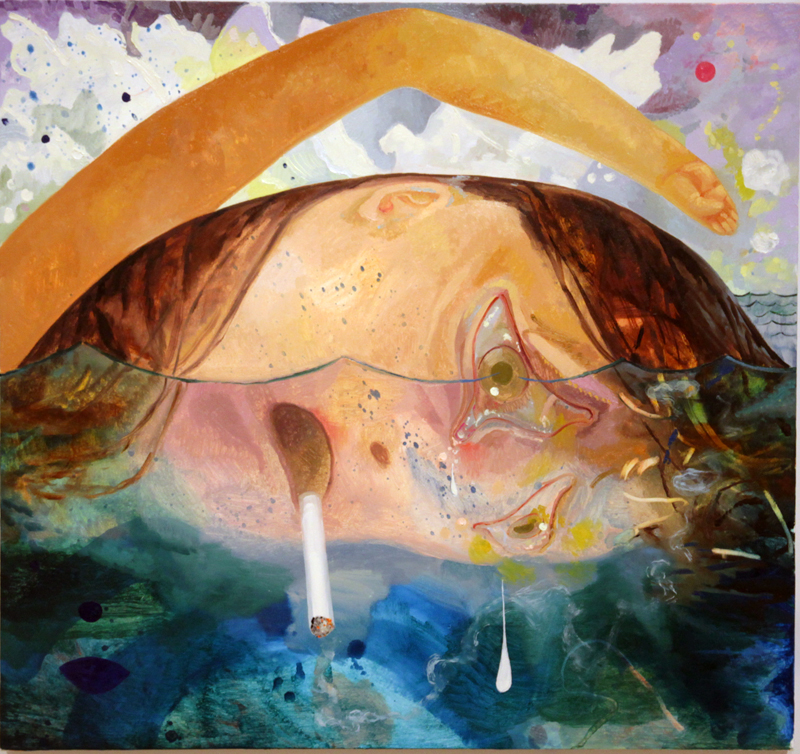 Following up on the excellent and well-received recent exhibitions of David Altmejd and Jon Rafman, the MAC has opened three new shows equally as stimulating and compelling.  Montreal’s Patrick Bernatchez is joined by the American painter Dana Schutz and France’s Camille Henrot in a lineup that provides depth and breadth with punchy and powerful visual pleasures, as well as a clear, high level of intellectually strong subject matter. These are shows that lead one into another with precise finesse, the geometry of their installations making intelligent, fluid sense at their borders with one another—while at the same time, remaining shows of work that no one could mistake for any other artist’s. 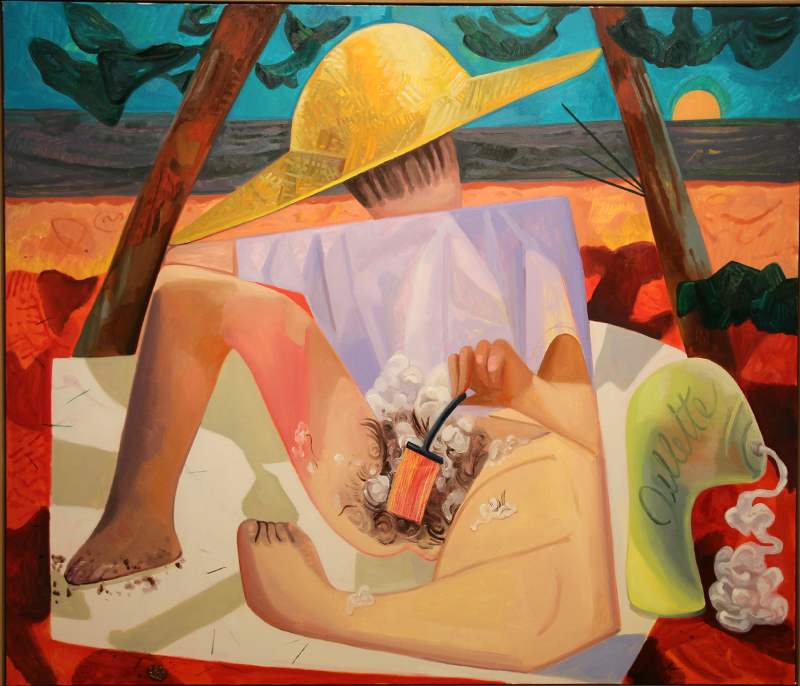 Dana Schutz has long been seen worldwide as one of the best and most exciting painters of her generation, having broken out with her debut exhibition Frank From Observation in 2002, as a very young artist. At this exact moment, her show in New York City Fight In An Elevator (a reference to Solange Knowles’ notorious dust-up with Jay-Z) is getting an enormous amount of attention—and rightly so, since her fascinating and brilliant mix of humor, biting commentary and more esoteric interests are as pumped up as ever by the use of a beautiful and searing color palette, and a style that mixes cartoonish expressionism and zany characters with compositions and drawing of virtuoso quality. Her work is saturated with a deep knowledge of the history of art (painting especially, but not only), and references to it abound, sometimes by turns cheekily smart, lovingly pointed, or hysterically sent up. The earliest painting in the show is a genuinely funny if mocking image of a woman sneezing so hard she seems to have expelled some of her brains. An impressive tally of paintings dating back to 2001, curated by MAC Director John Zeppetelli, array this retrospective of her portfolio with important examples from every era of her production. If hers were the only show at the MAC right now, it would still be worth crossing town to go see it. 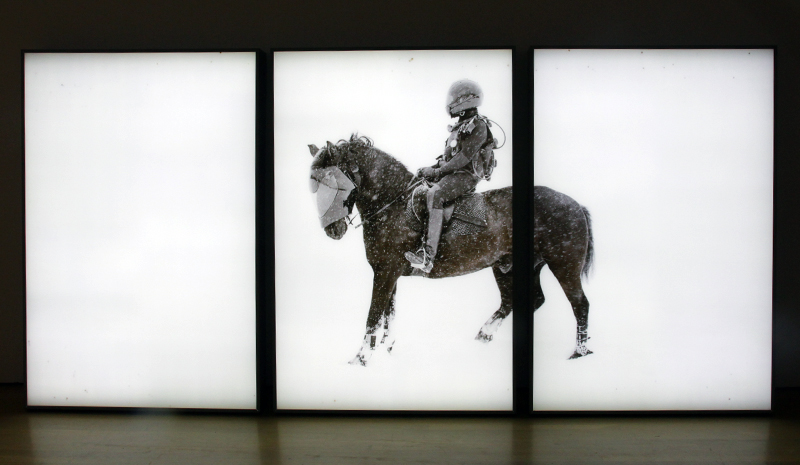 Impressively, the same is in fact true of the other two shows as well. Co-curated by MAC Chief Curator Leslie Johnstone and Kevin Muhlen (Artistic Director at Casino Luxembourg, where the exhibition started off), Patrick Bernatchez’s show, entitled Les Temps inachevés, groups together a number of coolly powerful works into a coherently spectral experience. From a darkly beautiful suite of drawings from his earlier Chrysalides series, to more recent works in video, sound and sculptural installation from his Lost in Time series, it is a darkly ethereal experience to spend time with his work that never descends into too-obvious morbidity or empty postures. The work immerses us in starkly honest contemplations of time and mutation—transmutation we could even say—and the manner in which these forces blend together, creating a narrative too long for any human being to fully witness or participate in. Bernatchez conjures a feeling at times not unlike the more interesting aspects of science fiction, well informed by science fact and theory, coupled with an assured visual sense of design, composition and finish. There is also a side of his production, lacking a better word for it, that summons an occult sort of atmosphere to mind. Some of what we glimpse can only be taken to make sense if we see it as no longer being a part of our world. 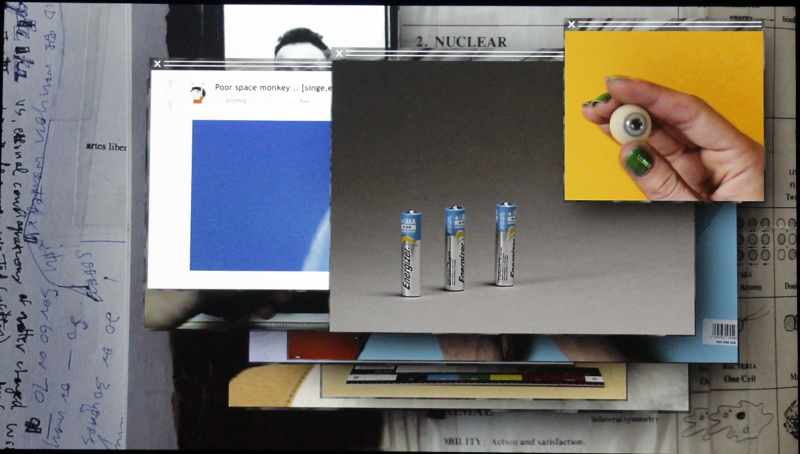 Finally, Camille Henrot clocks in with the quite spectacular video piece Grosse Fatigue, which runs only 13 minutes but feels longer—in a good way, as though we have lost track of time. Installed in a blue room that helps raise our awareness of the oracular qualities of the piece, the work engages the idea (and the actual stories) of the world’s creation myth cycles in a highly ambitious manner, but never comes off as pretentious or overwrought. With a script co-written with the poet Jacob Bromberg and voiced by artist Akwetey Orraca-Tetteh, it provides a lovely and bracing experience. Its multi-dimension use of screen shots within screen shots, within even further screen shots, plethora of used and well-assimilated footage, music and spectacular colour creates a vivid narrative tableau, in which a hopeful sensation on the subject of human origins and destiny emerges strongly into view. First shown at the Venice Biennale in 2013, the work was very well received, winning the artist the event’s Silver Lion award in the young artist category.

I highly recommend at least one trip down to see these exhibitions, and if you go make sure you have a bit of time. It would be a shame to have to run through and not be able to spend awhile with each artist’s unique show. ■

The exhibitions by Dana Schutz, Patrick Bernatchez and Camille Henrot are on display at the Musée d’art contemporain (MAC) (185 Ste-Catherine W.) until Jan. 10, 2016, $14/$10 students, half-price Wednesday evenings after 5 p.m.