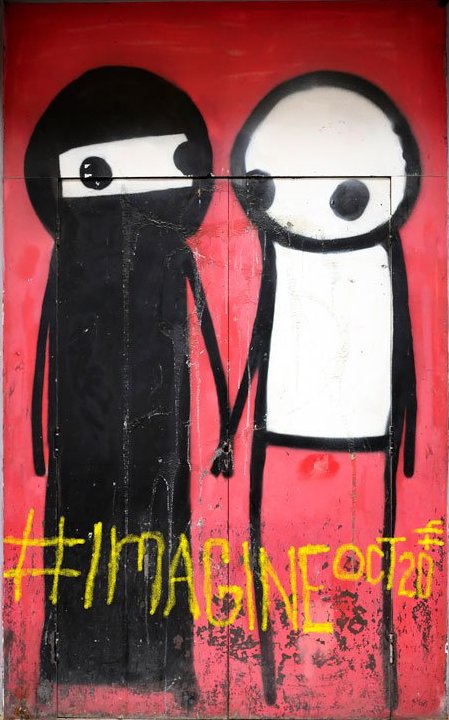 ImagineOct20th is more of an idea than an organization. In the spirit of election-season optimism, it simply asks Canadians who are tired of the Harper government to imagine the day after the federal election, when the Conservatives have been defeated.

There’s no leader and no profit coming in to the head of #ImagineOct20th, and it doesn’t endorse another party in particular (though the menu on its website is a familiar orange, and there has been at least one pro-NDP event organized in its name) — the language in its mission statement isn’t even overtly anti-Harper, though its whole raison d’être makes its antipathy toward our current Prime Minister clear.

#ImagineOct20th is “a blog and a hashtag” meant to inspire people to plan events in their city and to produce videos and art work aimed at fighting voter apathy. And Canadians have responded, particularly on the national music scene — concerts have been planned from coast to coast, and Montrealers have organized shows here in the 514, and, for the many Canadian ex-pats in NYC, in Brooklyn.

In Brooklyn, the No Harper NYC event at Hand & Detail (646 Lorimer) on Thursday, Oct. 15 (at 8 p.m., for $10 in advance, maybe more at the door) promises Montreal bands Nancy Pants, White Cliffs, Little Scream and Rococode, with more to be announced, as well as Montreal food (smoked meat and poutine among other dishes from NYC’s Mile End Delicatessen). Proceeds from this event are going to Vote Together, a non-partisan organization that encourages strategic voting to oust Harper from power. The event will also feature an appearance by Gillian Frank, who is suing the Canadian government over the July 20th decision by the Ontario Court of Appeals to strip over a million Canadians living abroad of their constitutional right to vote.

John Lennon’s “Imagine” is the first and most obvious musical reference that comes to mind in relation to #ImagineOct20th, but for something in a similar spirit and tone that’s more contemporary (and Canadian), contemplate a post-Harper Canada for seven minutes to the tune of Stars, and the title track of their 2007 album In Our Bedroom After the War: