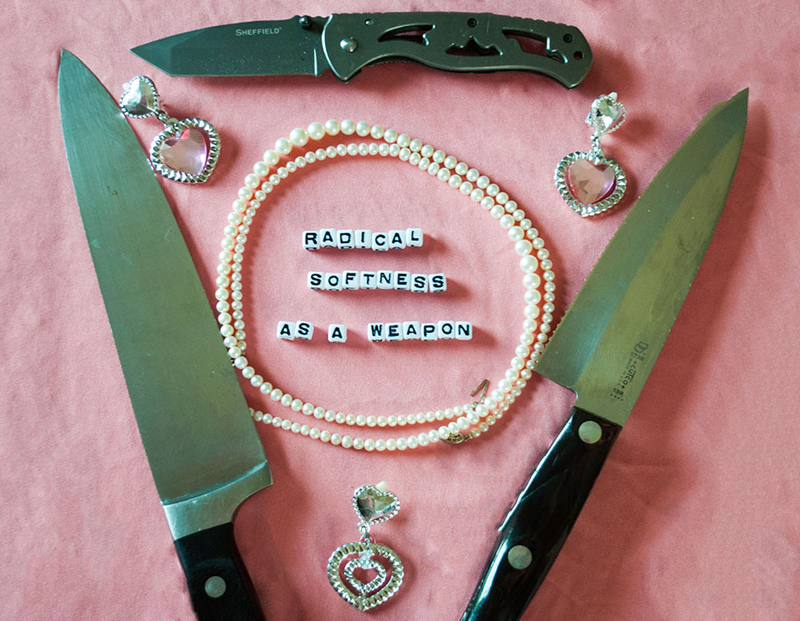 Work by Lora Mathis at Monastiraki

One of Montreal’s most well-known graffiti artists is Starchild Stela, known for combining ultra-cute, feminine characters with no-bullshit slogans like ‘Cats against catcalls,’ ‘Feminist Killjoy’ and ‘Destroy rape culture.’ Stela and frequent collaborator Zuzu Knew (a multidisciplinary visual artist and costume designer) are part of a growing movement of artists around the world who are creating a powerful femme-positive aesthetic by embracing, rather than rejecting, what’s cute and girlish.

When we continue to live in a culture that devalues feminine traits, where tomboys are cool role models for being ‘not like other girls’ but feminine boys (for whom I can’t even think of a descriptor that isn’t an insulting slur) are shamed with ridicule and threatened with violence, and where ‘gender-neutral’ means T-shirts and jeans but never skirts and glitter, we clearly still have a lot of issues to work out when it comes to our relationship with femininity.

Montrealers will have a chance to explore some affirmatively feminine artworks this month as Starchild Stela and Zuzu Knew are joining forces to curate and launch an exhibition at Monastiraki called Bow Town (opening with a vernissage Wednesday, Sept. 16 at 6 p.m.), featuring over 40 local and international artists who are contributing to the genre that Stela associates with the idea of Radical Softness (a term coined by participating artist Lora Mathis), including Laurence Philomene, Ian Langohr, Beth Frey, Jesse Purcell and many more.

We caught up with Stela and Zuzu earlier this week to learn more about the motivations behind the show:

Stela: For me, Bow town was definitively born out of frustration in navigating the art scene in Montreal, but out of that also came the realization that we are the best to organize events that matter to us. Despite the fact that there are a lot of people involved in the show, it’s still a small DIY art show that we set up in a small venue. I often feel like my artwork and its underlying messages doesn’t quite fit into mainstream shows, and most of the time I feel very unsafe in galleries. Artwise, I don’t have formal training and generally feel like my very femme style is looked down upon. So the idea was to bring together people who have similar vibes and create something fun with all of our frustration and anxieties! It is a not-so-serious show brought up as a way to take care of ourselves. 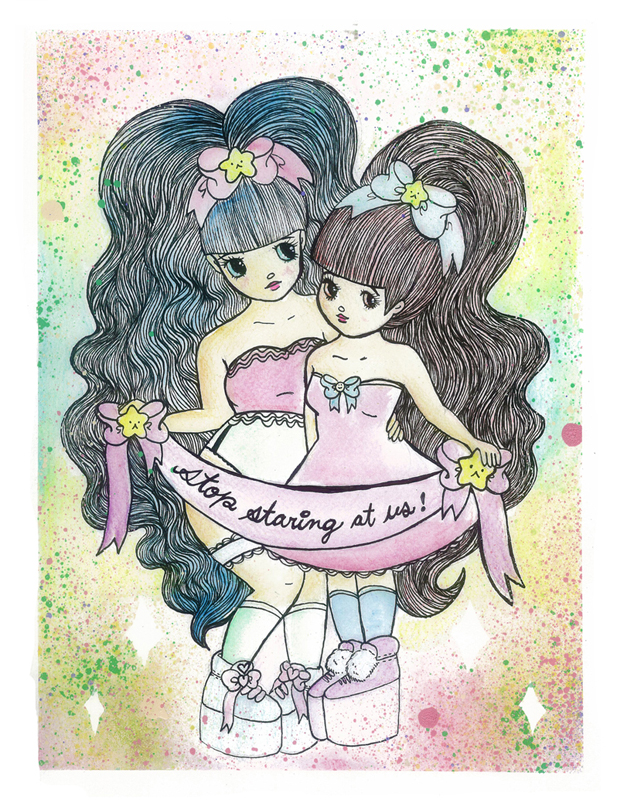 Work by Starchild Stela at Monastiraki

Zuzu: The majority of the work is Canadian (mostly from Montreal and Toronto but also Saskatoon and Vancouver), with some Americans from Portland, OR, Providence, RI, L.A., Florida, Utah and Italy. There are paintings, drawings, photography, fibres/mixed media, digital print and screen print. Styles ranging from soft pinks to rainbows through fantastical, whimsical, psychedelic, adorable figurative, abstract, animal/creature cute, slogans, etc. 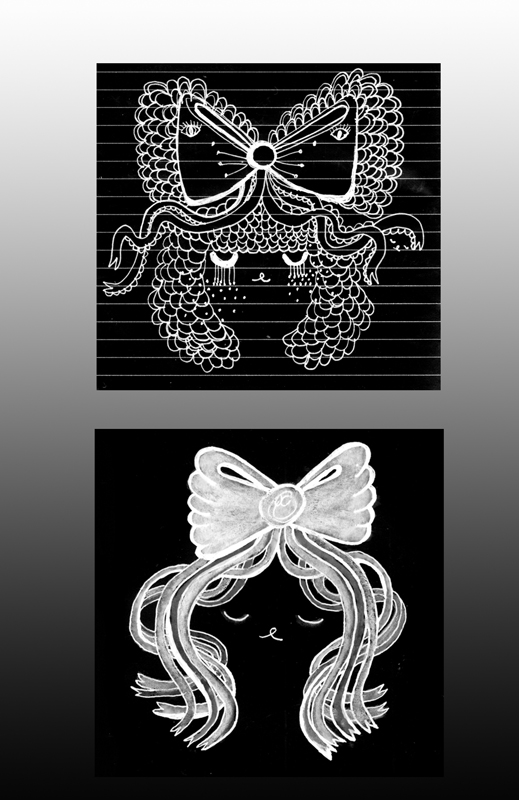 Artwork by Zuzu Knew at Monastiraki

Stela: The list of artists is rather large—most of the people involved are our friends that we know in real life. It was important to us to showcase artworks by a variety of sensitive and caring people from diverse backgrounds. People with different levels of skills and lived experiences. I am constantly amazed and inspired by my friends. They are my support base and showcasing their artworks is one of the ways I show them my admiration and gratefulness. Simon Fortin, Swarm, Laurence Philomene and Flora Hammond are all wonderful people who inspire me art-wise, and with whom sharing experiences resulted in the creation of the show. A lot of the out-of-towners featured are friends from the Internet, or girls I met through graffiti. For example, La Fille Bertha is a graffiti writer from Sardinia (Italy)—we’ve been chatting and exchanging mail for a couple of years. Naps, Binx and Yher are graffiti artists from the states. Ambivalently Yours, Squid Vishuss and Sugarbone are wonderful feminist artists I met through Tumblr. Lora Mathis is a photographer and poet with whom I’ve been discussing the idea of Radical Softness, which ties in with the underlying themes of the show; talking back and using our emotions as tool to fight back against oppressions. 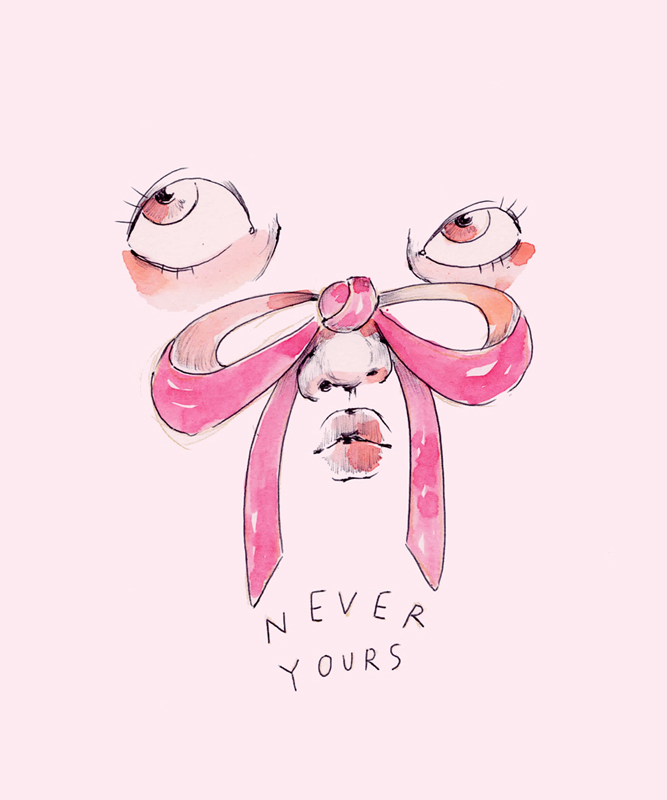 Work by Ambivalently Yours at Monastiraki

Zuzu: I’ve been travelling back and forth from Toronto a lot this past year for different projects and I’ve met a lot of amazing people (thanks to Mark Connery) that I felt important to give art crush high fives to: Ginette Lapalm, Fiona Smyth, Peter Kalyniuk and Jonny Peterson who runs a gallery/curiosity shop called Weird Things—which I think of as the Toronto version of Monastiraki, and my favorite Toronto converts (and ex Montrealers), political justice screen print master Jesse Purcell and Louise Reimer, whose gorgeous watercolour worlds I am in awe of.

Also in the last few years I have been getting to know a batch of Montreal artists, some more freshly moved from elsewhere or new to me but all the same art crushing, hearts in cheeks: Lenore Claire Herrem, Flora Hammond, Vile Child, Tiffany Paige, Swarm, Lovestruck Prints, Simon Fortin, Ian Langohr and Beth Frey. Last winter Stela  and I were invited by Sera Stanton to be part of a show in Portland called Pastel Quest. We were very happy to return the gesture and invite her for this show. Sera and art pal Ivy Atoms (also from Portland) each make female creature hybrids, often with space or manga themes, usually hyper-sexual and stunningly cute. Jon Vaughn is an artist from Saskatoon who I’ve met through friends making chaotic, structured yet amorphous abstract drawings. Holly Ruth Anderson is from Vancouver, (who I met when I was a teenager and have admired from afar) and makes stunning vintage inspired femme fatale art.

The show is also predominantly female identified artists. I invited some male artists curiously to see what they would do with a more feminine theme.

Stela: It is not a show about gender, although gender does affect the participants in different ways. Many of the artists identify with queerness and being femme. My gender identity is non-binary queer femme and it is clearly transparent in my work. I am happy to see people with different gender identities collaborating on this specific theme. We all grow up to devalue femininity and see it as a sign of weakness. Assuming my gender and my femmeness has taught me a lot about the ways internalized misogyny played a front-row role in my daily life and art practices. I’d say it’s a show about reclaiming our power, and bringing softness to the front of our battles. When we say we will make Montreal into a Bow Town, not a bro town, we are saying we want to bring forward femme culture and aesthetics, emotionality and care in our daily life and surroundings—and at the same time we refuse to feel smaller because of the impacts of toxic hyper-masculinity and intoxication culture. I see Bow Town as a fun show where people who are fed up about these struggles will find a bit of healing.

Zuzu: I’ve been reading some of the female surrealists lately. Unica Zürn’s The Trumpets of Jericho and Leonora Carrington’s The Hearing Trumpet. It is maddening to know that the Surrealist movement was predominantly run by men who credited their artist partners only as muses, but each of these women in their own right were stunningly prolific creators. I came across this quote in Carrington’s Hearing Trumpet, whose female protagonist is an elderly woman comparable to Alice In Wonderland:

“Houses are really bodies. We connect ourselves with walls, roofs and objects just as we hang on to our livers, skeletons, flesh and bloodstream. I am no beauty, no mirror is necessary to assure me of this absolute fact. Nevertheless I have a death grip on this haggard frame as if it were the limpid body of Venus herself.”

This, paired with Louise Bourgeois’ piece Femme Maison from 1942 has been riveting in my mind. Bows being decorative items we place on our persons, it seems fitting that Bow Town is also about the strength of the softness of an ever growing Matriarchy. ■

Bow Town will launch with a vernissage Wednesday, Sept. 16 at 6 p.m. at Monastiraki (5478 St-Laurent) and will be on display until Oct. 3